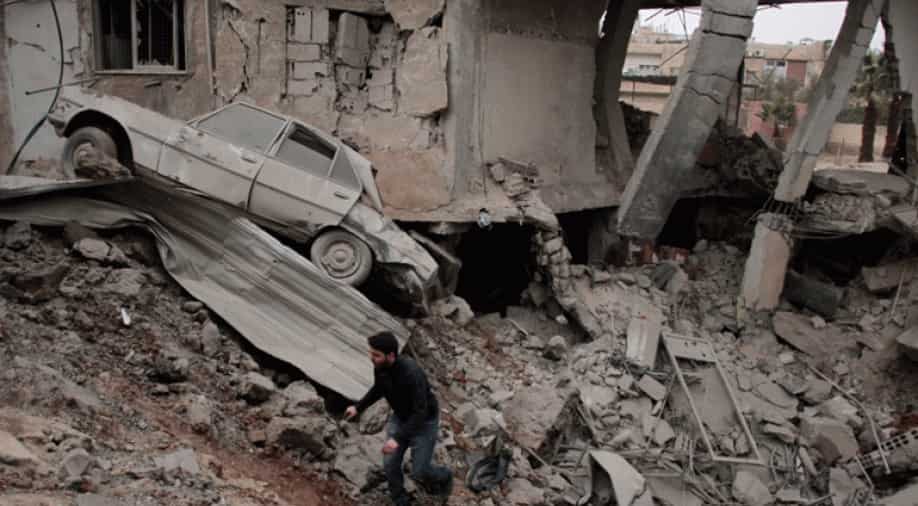 The group in control of the last rebel bastion near Damascus appeared on Sunday to have agreed to a deal for its fighters to make peace with the government or quit the eastern Ghouta enclave, Syrian state media said.

Jaish al Islam, most of whose members are drawn from the area, has been defending the city of Douma against a months-long onslaught by government forces.

If confirmed, its surrender or departure for rebel-held areas in northwest Syria would herald an end to the large-scale conflict in the enclave.

State television and Syrian newspapers said information indicated that, under the deal, the group would hand over heavy and mid-sized weapons and acknowledge the restoration of state sovereignty over Douma.

A Hezbollah run-media unit said on Sunday an agreement had been reached after several days of negotiations to spare bloodshed in Douma.

The unit of the powerful Lebanese Shi'ite militia that has been fighting with the Syrian army said among the terms of the deal was set up a Syrian government-approved local council to run the city`s affairs after rebels withdraw.

It also said a Russian-led committee with representatives from Turkey, Iran and Russia, the three guarantors of the Astana peace talks who set up "de-escalation" zones across Syria, would be responsible for handing over prisoners of war jailed by the rebels.

Jaish al Islam had no immediate comment on the reports but responded to earlier claims by the Syrian government that it was negotiating a deal to stay and not to pull out of the city.

The government lost control of Douma, the largest urban centre in the eastern suburbs of Damascus in insurgent hands, in the early phase of Syria`s civil war, now in its eighth year.

If confirmed, the agreement with Jaish al Islam would mirror others reached by insurgents following heavy bombing of areas under their control by government forces and Russian jets that has killed hundreds of civilians.

Late on Saturday, negotiators reached a deal to evacuate wounded Jaish al Islam civilians and fighters to Idlib in the northwest.

A group of stranded fighters from another insurgent group, Failaq al Rahman, who had fled to Douma from advancing army troops at the start of the latest campaign, left the city on Sunday, state media said.

Syria's state news agency SANA said 24 buses carrying around 1,200 fighters from Failaq al Rahman and their families left Douma on Sunday in the first such pullout of fighters.

On Saturday the rebel group concluded a week-long evacuation of thousands of its fighters from areas it had controlled in other parts of the enclave.

A political official in Jaish al Islam denied they had agreed to evacuate Douma and said the government-inspired reports were stepped up psychological warfare aimed at forcing them to capitulate.

"Jaish al Islam has taken the decision to remain steadfast and the idea of leaving is not on the table," said the official.

Opposition sources say Jaish al Islam officials have been desperately trying to strike a deal that would bring Russian military police into Douma, and let the group keep a role in maintaining internal security but under the state`s overall jurisdiction.

Russian military officers negotiating with Jaish al Islam told the group it accepted such an arrangement but the Syrian government remained against it, a senior opposition source familiar with the talks said.

Russia, a key ally of President Bashar al-Assad, was behind the main battle plan, directing elite forces and militias on the ground and calling in air strikes from Syrian and Russian warplanes, two Western intelligence sources based in the region told Reuters this week.

The Syrian army last week warned the insurgents to surrender or face a military assault to drive them out.

The Syrian army command said on Saturday it had regained most of the towns and villages in eastern Ghouta and was pressing its military operations in Douma.

The city's fall would seal the rebels' worst defeat since 2016.
The once bustling commercial hub on the outskirts of the capital was the main centre of street protests in the Damascus suburbs against Assad's one-party rule that ignited the conflict more than seven years ago.

A resident reached by phone described a sense of foreboding among those still in the besieged city.

"The fear is of the unknown and not bombardment or hunger ... what the coming days will bring we cannot predict," said the resident, Bilal Bwaidani.

Defence analysts say a major goal of the government's campaign was to complete a security belt around the capital, where for years rebels dug into a network of tunnels and well-fortified positions resisted countless offensives to seize the enclave.

Many of the predominantly Sunni Muslim inhabitants of eastern Ghouta say they fear their displacement was part of a deliberate attempt to bring demographic changes in strategic areas that dilute their presence in favour of Assad`s Alawite sect and other minorities.