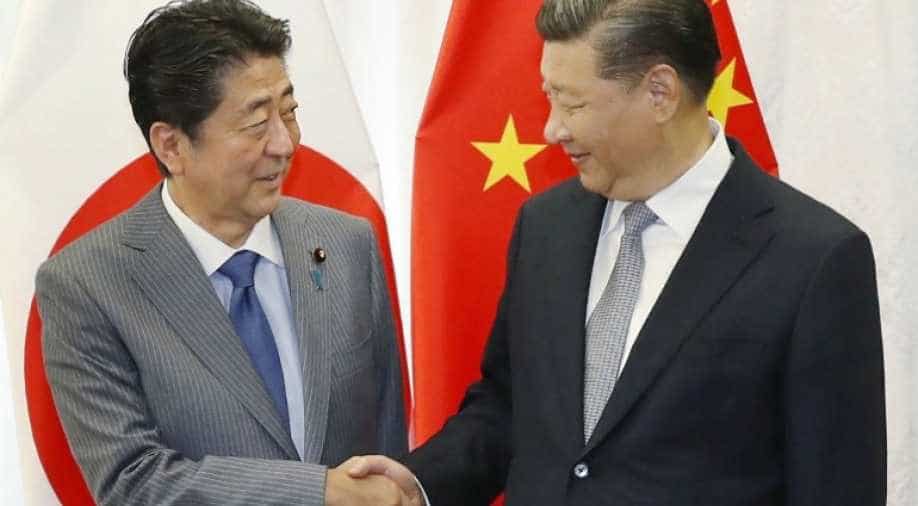 Premier Li Keqiang greeted Abe as Japan's flag flew outside the opulent Great Hall of the People across from Tiananmen Square, and they reviewed an honour guard before going inside for talks.

Japan and China signed $2.6 billion in business deals and touted their warmer ties on Friday during a rare visit to Beijing by Japanese Prime Minister Shinzo Abe as both face trade challenges from US President Donald Trump.

Premier Li Keqiang greeted Abe as Japan's flag flew outside the opulent Great Hall of the People across from Tiananmen Square, and they reviewed an honour guard before going inside for talks.

Relations between Asia's two biggest economies have improved in recent years after they sunk to new lows in 2012 when Tokyo "nationalised" disputed islands claimed by Beijing.

Addressing a joint press conference, Abe said that the two leaders had agreed to "play a constructive role for the sake of this region's peace and prosperity".

"I believe active trade will deepen ties between Japanese and Chinese peoples further," he said.

"Now, international conditions are unstable, and uncertainties have increased," Li said, adding that the countries' economic cooperation would "benefit the development of global free trade".

The relationship has rapidly warmed up as Trump has slapped massive tariffs on China while also targeting Japanese exports in his effort to cut US trade deficits, despite touting his personal bonds with Abe and Chinese President Xi Jinping.

But behind the feel-good vibes, Abe also delivered a sterner messages, a Japanese spokesman said, warning China that "without stability in the East China Sea, there will not be a true improvement in the relationship."

He also told Li that "the international community, including Japan, is watching carefully the human rights situation in China".

Abe also met with Xi and details of their talks were expected later in the evening.

Abe travelled with nearly 1,000 delegates from Japanese companies who struck 500 deals worth a total of $2.6 billion, Li said, without providing details.

The companies are eager for increased access to China's massive market, while Beijing is interested in Japanese technology and corporate know-how.

The two leaders also oversaw the signing of several political agreements, including a currency swap deal and a mechanism to avoid accidental clashes between their militaries which often come in contact in the disputed East China Sea.

"The uncertainty in Trump policy made Abe feel that he could not bet only on the United States," Hu told AFP.

"If he adjusts his relationship with China, he will have more initiative and space in the future when he is negotiating with the United States."

China's nationalistic Global Times said in an editorial that "though the US is quite an influential factor in China-Japan ties, the effect is limited".

"If Beijing and Tokyo intend to plan their future bilateral relationship based on Washington's attitude, they will only get lost," the state-run daily said.

The last official visit to Beijing by a Japanese prime minister was in 2011.

Since an awkward 2014 encounter between Abe and Xi on the sidelines of a summit, there have been ministerial visits by both sides and a softening of rhetoric. Li visited Tokyo in May.

Abe's three-day trip, which began Thursday, sets up the possibility that Xi will visit Japan next year.

Abe and Li already met on Thursday during a reception to celebrate the signing of the treaty that put Japanese and Chinese relations back on track after World War II.

But territorial disputes continue to cause frictions.

Just days before Abe's trip, Tokyo lodged an official complaint after Chinese ships cruised around the disputed islands that Tokyo calls the Senkaku and Beijing labels the Diaoyu islands.

China has long denounced Japan for what it says is an insufficiently contrite attitude towards its role in World War II.

But ahead of the trip, Beijing has taken a more cordial stance than it has in the past.

Japanese media have reported Abe is hoping the visit will produce a soft power win in the form of some panda diplomacy, with zoos in Sendai and Kobe apparently angling for new additions.