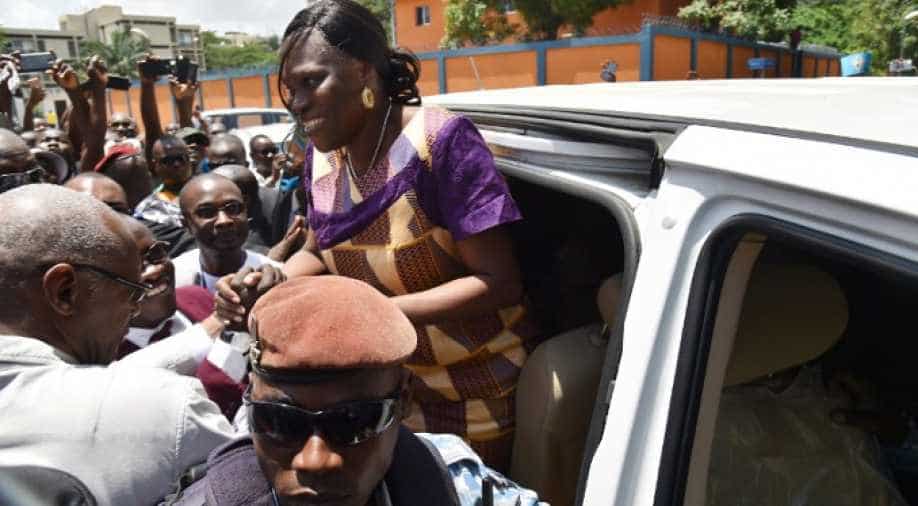 Former Ivory Coast first lady Simone Gbagbo is greeted as she arrives at her home after she was released from prison. Photograph:( AFP )

The 69-year-old wife of former president Laurent Gbagbo was convicted over political violence that claimed several thousand lives in 2010-11.

Former Ivory Coast first lady Simone Gbagbo, who had been serving a 20-year jail term, was released on Wednesday, two days after being amnestied by President Alassane Ouattara.

After seven years detention, Gbagbo returned to her home in an upmarket district of Abidjan to be greeted by around 1,000 supporters.

The 69-year-old wife of former president Laurent Gbagbo was convicted over political violence that claimed several thousand lives in 2010-11.

"The old page is turned," she told activists outside her home. "Get ready for a new page."

On Monday -- the eve of the Ivory Coast's independence day - Ouattara announced an amnesty for Gbagbo and around 800 others in the name of national reconciliation.

She had been implicated in the 2011 shelling of a market in an Abidjan district that supported Ouattara and for belonging to a "crisis cell" that allegedly coordinated attacks by the armed forces and militias in support of her husband.

About 3,000 people died in post-election violence in the country's commercial capital, Abidjan, when Laurent Gbagbo refused to accept defeat to Ouattara, his bitter rival, in a presidential ballot in November 2010.

She was first detained without trial after her arrest in 2011 and later convicted and sentenced in 2015 on a charge of endangering state security.

Laurent Gbagbo has been in detention at the International Criminal Court (ICC) at The Hague for seven years. He has been on trial since 2016 for alleged crimes against humanity.

Ouattara has been under pressure to foster reconciliation. The legacy of the 2010-11 conflict is still felt deeply today, especially in politics.

The Gbagbos retain a groundswell of support within the Ivorian Popular Front, the party they co-founded in the 1980s but which has since split into two factions.

The leader of the pro-Gbagba faction, Abdoudramane Sangare, said her release "prepares the arrival of Laurent Gbagbo".

"One step has been taken, another remains to be done. I know that we will overcome all obstacles," he said.&nbspOn Tuesday, 11 rights groups, including Human Rights Watch and Amnesty International, lashed the mass release.

"There should be no amnesty for those responsible for war crimes, crimes against humanity and other serious human rights violations," they said.

"To decide, after seven years of judicial proceedings involving hundreds of victims and alleged perpetrators, that only 60 people will face justice is not only an arbitrary decision but will be an act of disrespect to victims."

Among others granted amnesties were former defence minister Lida Kouassi - a key Gbagbo ally - who was sentenced this year to 15 years for conspiracy, and former construction minister Assoa Adou, jailed in 2017 for four years.

Around 500 of those named have already been released provisionally from detention, the president said. They will have their criminal records erased.&nbspIn February 2012, the ICC also issued a warrant for Simone Gbagbo's arrest.

But in 2016, Ouattara said he would "no longer send" Ivorian nationals to the court, as the country now had a "functioning justice system."

Ouattara on Monday also announced a reform of the Independent Electoral Commission, a panel which has been accused of bias and inequality.