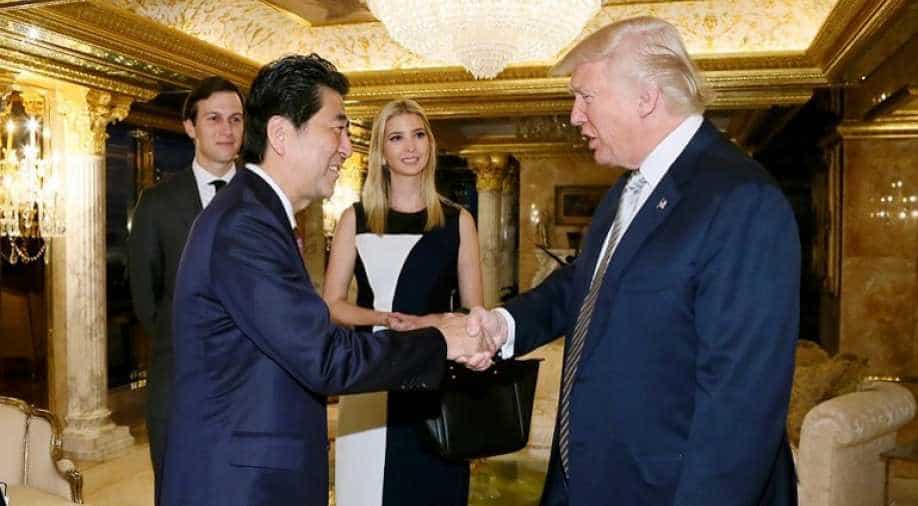 Photos of US President-elect Donald Trump's landmark first talks with a foreign leader show his daughter Ivanka was present, underscoring the family`s influence as he readies to take power.

In the meeting with Japan's Prime Minister Shinzo Abe at the mogul's Trump Plaza residence, Ivanka -- a model-turned-business executive -- was seen seated as the group conversed in the opulent reception room.

Media were shut out of the gathering in Manhattan, but images released by the Japanese government also showed Ivanka and her husband, real estate developer and publisher Jared Kushner, standing and chatting with Abe.

Ivanka and Kushner, both 35, have emerged as key advisers to Trump, who shocked the world by beating Democrat Hillary Clinton in the November 8 election.

World leaders have scrambled to establish ties with Trump but Abe was the first to see him in person since the vote which has provoked anxiety over US foreign policy and its commitment to security in Asia.

Abe told reporters afterwards that the encounter convinced him the US president-elect was someone "in whom I can have great confidence".

"We were able to have a very candid talk over a substantial amount of time. We held it in a very warm atmosphere," he said. "Without confidence between the two nations, our alliance would never function in the future."

Also seen standing in one of the photos, amidst the gilt and chandeliers of Trump's skyscraper, was former general Michael Flynn, who has reportedly been offered the post of national security adviser.

But the presence of Ivanka, in a black-and-white dress and high heels, drew attention in protocol-conscious Japan, particularly after the tabloid press reported Trump planned to appoint her as US ambassador to Tokyo.

"It's quite unusual to see a family member attending the first encounter between two leaders even if it's informal," said Yoshinobu Yamamoto, a professor at the University of Niigata Prefecture,

"It indicates that she would be playing some important role in the Trump administration," he added.

"But it's no surprise to see her there as she has already been involved in politics. Anyway, that's the Trump way."

Ivanka Trump is a key player in her father's business empire and has her own fashion label and jewellery line, and active Twitter and Instagram accounts that nourish her brand.

The Tokyo Sports newspaper carried an article headlined "Trump daughter-blonde beauty Ms Ivanka the next ambassador to Japan!?" on its website last Saturday.

It cited unidentified overseas media as having reported before the vote that Trump had secret plans to appoint her ambassador, replacing current envoy Caroline Kennedy who is the daughter of assassinated US president John F. Kennedy.

"I don't think the possibility that Ivanka would be an ambassador to Japan is zero, but it`s too early to say," said Yamamoto.