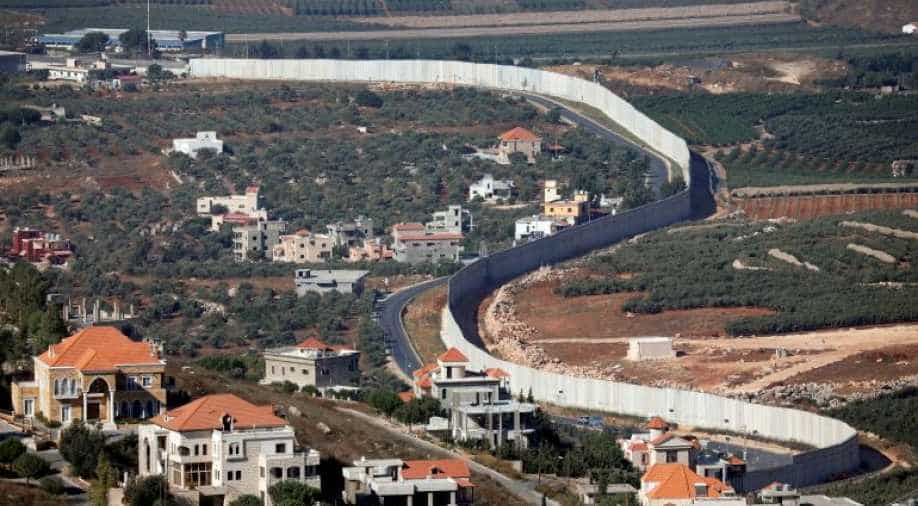 File photo: A general view picture shows the Lebanese village of Adaisseh on the left-hand-side of the Israel-Lebanon border, as seen from Kibbutz Misgav Am in northern Israel. Photograph:( Reuters )

Israel and Lebanon's Hezbollah, which last fought a war in 2006, are on high alert after drones were used at the weekend to attack what a security official in the region described as a target linked to precision-guided missile projects.

Israel accused Iran on Thursday of stepping up efforts to provide the Hezbollah militia with precision-guided missile production facilities, a warning to Beirut that Israeli counter-strikes could escalate.

Israel and Lebanon's Hezbollah, which last fought a war in 2006, are on high alert after drones were used at the weekend to attack what a security official in the region described as a target linked to precision-guided missile projects.

Hezbollah has blamed Israel for the rare strike in Beirut, and said it will retaliate. The heavily armed Shi'ite movement has denied harbouring such missile facilities. Lebanon has accused Israel of seeking pretexts for aggression.

Without claiming responsibility for the drone attack, the Israeli military published what it said were details about an extensive Iranian-sponsored campaign to provide Hezbollah with the means to produce precision-guided missiles.

Such missiles - which Hezbollah acknowledges possessing - could potentially pose a counter-balance to Israel's overwhelming military force in any future war, with the capacity to home in on and knock out core infrastructure sites.

Lieutenant Colonel Jonathan Conricus, an Israeli military spokesman, said that in recent months Iran had increased the pace of the project such that it was "faster in terms of buildings, facilities, locations, conversion and manufacturing facilities, and it means more people, operatives involved in doing so".

"They are the ones who are complicit in endangering Lebanon and Lebanese civilians which Hezbollah and Iran are using as human shields."

There was no immediate response from Tehran, Israel's arch-foe, whose nuclear programme and regional activities have been a focus of redoubled US pressure under President Donald Trump - with knock-on tensions in the Gulf.

After Hezbollah said it would respond to the Beirut strike by downing Israeli drones that enter Lebanon's skies, the Lebanese army on Wednesday shot at drones that it said had crossed the border. Israel said there was no damage to them.

In the past Israel has argued that the Lebanese army is too close to Hezbollah to warrant the more than $1.5 billion in US military assistance it has received since the 2006 war. Washington regards the army as a counter-weight to Hezbollah.

Conricus said there was no change to Israel's position on the Lebanese army. But he appeared to play down the threat.

"We continue to classify Hezbollah as our main enemy and the Lebanese Armed Forces as a potential enemy," he said. "If they fire at Israel, tactically speaking, ... then that specific force on the ground will be considered an active enemy, but strategically speaking Hezbollah is the enemy."