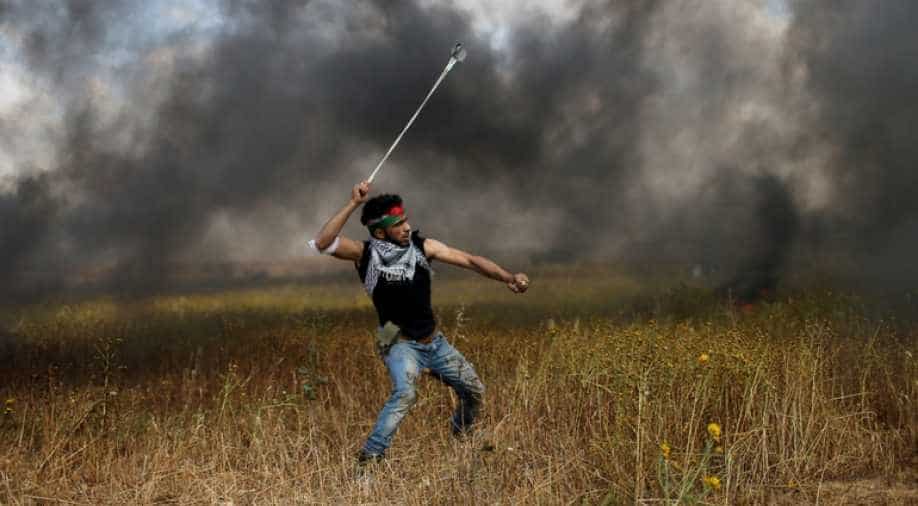 A Palestinian hurls stones at Israeli troops during a tent city protest along the Israel border with Gaza, demanding the right to return to their homeland. (File photo) Photograph:( Reuters )

Israel rejected calls for an independent probe on Sunday after its soldiers killed 16 Palestinians and wounded hundreds more when a major demonstration led to clashes along the border with the Gaza Strip.

Israel's military has faced questions from rights groups over its use of live fire on Friday, the bloodiest day in the conflict since a 2014 war, while Palestinians accuse soldiers of firing on protesters posing no threat.

On Saturday, the United States blocked a draft UN Security Council statement urging restraint and calling for an investigation of the violence, diplomats said.

Lieberman said calls for an independent investigation were hypocritical and on Sunday repeated his rejection of such an investigation.

"There will be no commission of inquiry," he told Israel's public radio.

"There will be no such thing here. We shall not cooperate with any commission of inquiry."

Netanyahu also hit back at Turkish President Recep Tayyip Erdogan over his sharp criticism of what he called Israel's "inhumane attack" in Gaza.

"The most moral army in the world will not be lectured to on morality from someone who for years has been bombing civilians indiscriminately," Netanyahu tweeted.

He has previously labelled Erdogan as someone who "bombs Kurdish villagers".

On Friday Israeli troops opened fire on Palestinians who strayed from a main protest camp attended by tens of thousands and approached the heavily fortified fence cutting off the blockaded Gaza Strip.

The military has defended the soldiers' action and said they opened fire only when necessary against those throwing stones and firebombs or rolling tyres at soldiers.

It said there were attempts to damage the fence and infiltrate Israel, while alleging there was also an attempted gun attack against soldiers along the border.

Israel accuses Hamas, the Islamist group that runs Gaza and with whom it has fought three wars since 2008, of using the protest as cover to carry out violence.

In addition to the 16 Palestinians killed, more than 1,400 were wounded Friday, 758 of them by live fire, with the remainder hurt by rubber bullets and tear gas inhalation, the health ministry in Gaza said.

No casualties were reported among Israelis.

The armed wing of Hamas said five of those killed were its members who were participating "in popular events side-by-side with their people".

The Israeli army alleges 10 of the dead had "documented terror backgrounds" in Hamas and other groups and were killed "whilst carrying out acts of terror".

Unverified videos being shared online have fuelled the debate, including one appearing to show a protester running with a tyre being shot while seeming to pose no threat.

Israel's army has issued a statement saying footage is being "edited and fabricated," without referring to specific videos.

Rights groups including Amnesty International and Human Rights Watch have criticised Israel's use of live fire.

Israel had deployed troop reinforcements along the border, including more than 100 special forces snipers, saying it would prevent attempts to break through the fence.

"While some Palestinian demonstrators have thrown stones and other objects towards the fence, it's hard to believe how this would be an imminent danger to the lives of well-equipped soldiers protected by snipers, tanks and drones," Amnesty said.

The protest, which includes tents erected at various areas, is designed to last six weeks, ending around the time the United States moves its embassy from Tel Aviv to Jerusalem in mid-May.

The embassy move has deeply angered the Palestinians, who see Jerusalem's annexed eastern sector as the capital of their future state.

But while tens of thousands attended Friday's start of the protests, demonstrations have since dwindled. Several hundred attended on Saturday, while on Sunday dozens milled around protest tents.

The protests may however again see large crowds after Friday's main Muslim prayers and for upcoming key dates.

May 14 will mark 70 years since the creation of Israel and is when the United States is expected to open its new Jerusalem embassy.

Palestinians will mark what they call the Nakba, or "catastrophe," the following day.

The Nakba commemorates the more than 700,000 Palestinians who either fled or were expelled from their homes in the war surrounding Israel's creation in 1948.

Gaza's protest is in support of refugees, including those in the Palestinian enclave who want to return to their former homes in what is now Israel.