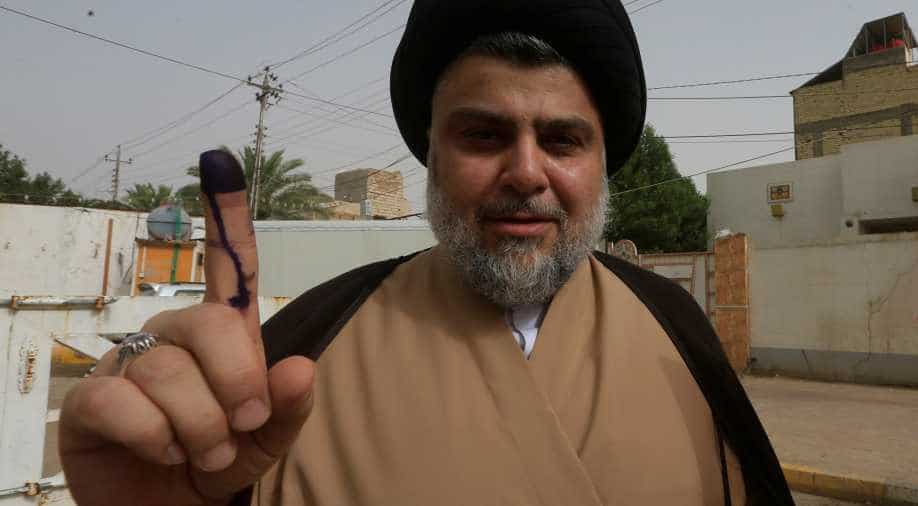 Moqtada al-Sadr, a firebrand Shi'ite cleric who led uprisings against U.S. troops, appeared to make a remarkable comeback in Iraq's parliamentary election after being sidelined for years by Iranian-backed rivals.

Sadr made his name leading two uprisings against U.S. forces in Iraq, drawing support from poor neighbourhoods of Baghdad and other cities. Washington called the Mehdi Army, the Shi'ite militia loyal to Sadr, the biggest threat to Iraq's security.

As top politicians in suits voted at a fancy Baghdad hotel on Saturday in the first election since Islamic State militants were defeated, Sadr in trademark turban and robe was shown walking to a polling station in poor district to cast his ballot.

The television footage of Sadr voting reinforced his image as a maverick who appeals to Iraq's dispossessed.

If initial results are confirmed, British-educated Abadi, a Shi'ite who as prime minister nurtured ties with Washington and Tehran, may have to form a coalition with Sadr, who fought the Americans and is one of the few Shi'ite leaders to keep a distance with Iran, which has powerful influence in Iraq.

Sadr, who was shown sipping juice in a palace in the Saudi city of Jeddah on the Red Sea coast, shares an interest in countering Iranian influence in Iraq.

Sadr rose to prominence in the unrest and chaos that erupted in Iraq after U.S. troops toppled Saddam Hussein's rule in 2003. Armed mostly with AK-47 assault rifles and rocket-propelled grenades, Sadr's militia challenged the world's most powerful military as it tried to stabilise Iraq.

Sadr derives much of his authority from his family. His father, highly respected Grand Ayatollah Mohammed Sadeq al-Sadr, was murdered in 1999 for defying Saddam Hussein. His father's cousin, Mohammed Baqir, was killed by Saddam in 1980.

U.S. officials and Sunni Arab leaders accused the Mehdi Army of being behind many sectarian killings that ravaged Iraq. The U.S. occupation authority issued an arrest warrant for him for his alleged role in the murder of a rival cleric.

Sadr has disavowed violence against fellow Iraqis and in 2008 ordered his militia to become a humanitarian group.

He can still mobilise thousands of supporters to press his agenda, and he formed an unlikely alliance with communists and other independent secular supporters to demand the formation of a government of independent technocrats to end corruption.

"We call on the Iraqi people to stage a white revolution, everybody must cast his ballot, nobody should abstain from voting, it is the last chance for change," Sadr said in a televised speech in April.

His list is known as "Sairoon" in Arabic, or On The Move.

"Our program is about building effective corruption-free state institutions, rehabilitating and expanding infrastructures, providing essential services to the poor, like health and education," said Jumah Bahadily, a lawmaker who belongs to the Sadrist movement.

Sadr's support extends to Iraq's crumbling second city of Basra, in the Shi'ite heartland in the south of the country and near the OPEC producer's main oilfields.

"We defeated the corrupt people which have ruled Iraq since 2003," said Mohanad Sahib, a 38-year-old engineer in Basra, who voted for Sairoon. "They are from the people."

Some voters said a call by the influential Shi'ite cleric, Grand Ayatollah Ali al-Sistani, for voters to reject corrupt candidates was a tacit signal to back Sairoon.

"It's correct he didn't mention them directly but he meant this," said Mohamed Matar, who also supported Sadr's list.

But more mainstream politicians have sought to undermine support for Sadr in the past. Former Prime Minister Nuri al-Maliki, a close ally of Iran, ordered a crack down on the Mehdi Army in Basra in 2008, calling its members ''outlaws''. Dozens were killed.

Maliki's Dawa party has also been fielding candidates in this election.