Investors keep their faith in Hong Kong markets despite protests 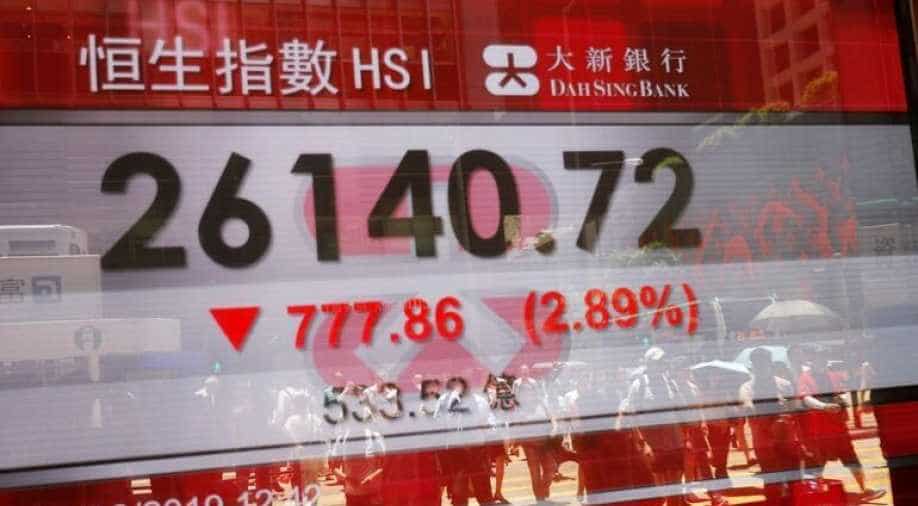 Bankers say at least three more major companies are set to list in Hong Kong this month, selling more than $3 billion (£2.44 billion) worth of new shares.

As anti-government protesters fought pitched battles with police in Hong Kong streets last week, a group of bankers in another part of the city were busy taking in billions for the public float of the Asia unit of the world's largest brewer.

After a freeze during months of sometimes violent protests, Asia's top financial hub looks to be back in business. The stock market is off its lows, Hong Kong's love affair with property is undimmed and companies are forging ahead with listing plans. Budweiser Brewing Company APAC raised about $5 billion in its initial public offering on the Hong Kong Stock Exchange, making it the second-largest IPO in the world this year.

Bankers say at least three more major companies are set to list in Hong Kong this month, selling more than $3 billion (£2.44 billion) worth of new shares.

Hong Kong's status as a gateway for global capital flowing into and out of China, the world's second-largest economy, has seen many global banks and fund managers make its towering skyscrapers their regional homes.

"How does this (unrest) affect you buying exposure to a good asset that has a presence in China, and is growing? None of those things have any correlation with the Hong Kong protests," said a senior banker with a global investment bank.

"I don't think I have received even one phone call saying 'we shouldn't be doing this IPO because of what's happening in Hong Kong’," said the banker, declining to be named due to sensitivity of the issue.

Companies raised $15 billion in new listings in Hong Kong in the first nine months of 2019, second only to New York, according to Refinitiv data. While the protests have hurt tourism and retail sectors, threatening to send Hong Kong into its first recession in a decade, its proximity to the massive Chinese market and locally listed firms' presence there are more important, bankers and analysts say.

The benchmark Hang Seng stock index rallied about 1.4 per cent last month but is still down 6.1 per cent since mid-June when the unrest began.

"I think people are getting used to the weekly events," Steven Leung, executive director for institutional sales at brokerage UOB Kay Hian, said of the protests. "The impact was seen in the initial one to two months in share prices, and mostly in retail, property and tourism," he said. "(But) the index mostly reflects the onshore Chinese market and economy. Hong Kong companies' share is not that big."

What started as protests over a now-withdrawn extradition bill that would have allowed criminal suspects to be sent to mainland China for trial have evolved into broader calls for greater democracy, among other demands in Hong Kong.

Demonstrators are frustrated at what they see as Beijing's tightening grip over the former British colony, which returned to China in 1997 under a "one country, two systems" formula intended to guarantee freedoms not enjoyed on the mainland.

After the initial nervousness about the unrest, things are looking up again in the financial markets, partly aided by hopes that Beijing would not take any step that would imperil the prospects of its only offshore financial centre, analysts said.

"The question is whether people think there is a replacement. Hong Kong still has quite a big investor pool," said Gary Ng, an economist at Natixis.

As many as 40 companies have filed IPO applications with the Hong Kong stock exchange in September, according to information available on its website, the highest pace of filing since March this year.

In addition to the Budweiser APAC IPO, Topsports International Holdings, the sportswear business of Chinese footwear retailer Belle International, last week launched a Hong Kong IPO of up to $1.2 billion. Companies expected to launch Hong Kong IPOs within a month include ESR Cayman Ltd, a developer and manager of logistics facilities, planning to raise about $1 billion, and a $1 billion-plus float of Prague-based consumer lender Home Credit. ESR and Home Credit declined to comment.

"A deal can always get done if the price is right, no matter what the market conditions are," said James Wang, co-head of equity capital markets in Asia ex-Japan, at Goldman Sachs, referring to the broader IPO market. "An IPO's timetable is driven more by the company's need to raise capital so in most cases, market conditions have to be severe to override that need and delay a deal."

Investors including sovereign wealth funds and large global funds that invested in recent offerings are enthused by the lower valuations as well as long term business prospects, bankers said.

Budweiser, which relaunched its IPO last month after cancelling plans for a bigger float in July, priced the offering at the low end of the indicative range.

E-commerce giant Alibaba Group in August also delayed plans for a $15 billion listing in Hong Kong because of the political turmoil.

But such caution has not badly dented the demand for new and listed stocks.

In another sign of solid demand, net purchases on southbound stock connect that allows mainland-based investors to buy Hong Kong stocks - reached $8 billion in August, the most since January 2018. Other markets in Hong Kong are also holding up.

Demand from homebuyers in the world's most expensive property market has shown little signs of weakening due to the protests. Property firm Wheelock sold 80 per cent of its 816 flats in the development since late August, lower than sales at other launches this year, but "still good" given the current environment, property agents said.

Still, other factors including the US-Sino trade war and slowing global growth have been affecting financial markets and asset prices in Hong Kong, as they have elsewhere.

Sean Taylor, APAC chief investment officer at fund manager DWS said Hong Kong could benefit more than most if China and the United States reach an agreement on trade. In the meantime, investors needed to be patient.

"You've got to accept the situation that tourism levels are down, retail sales are down, property prices may come down a bit – you're going to be in a slow environment for a while," Taylor said.