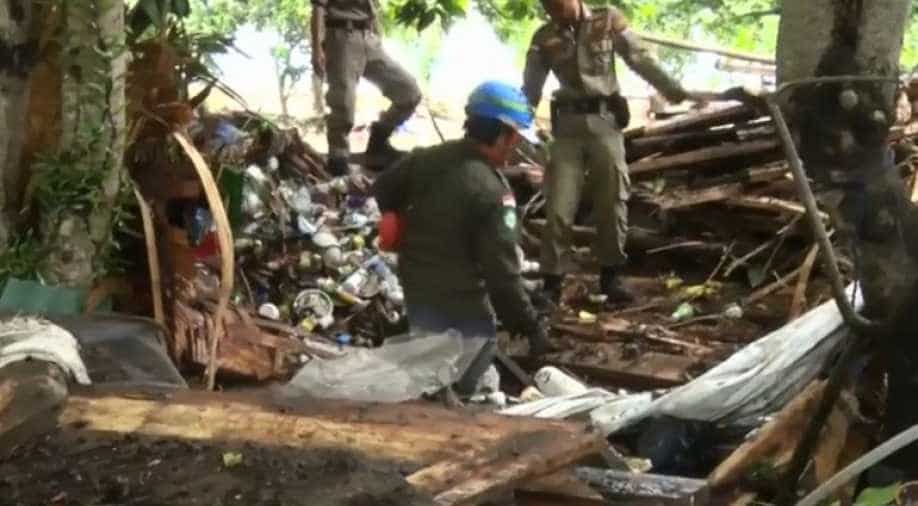 Medical workers have warned that clean water and medicine supplies were running low -- stoking fears of a public health crisis -- as thousands of displaced survivors cram shelters and hospitals. Many were left homeless by the killer wave.

Indonesian search and rescue teams Wednesday plucked stranded residents from remote islands and pushed into isolated communities still desperate for aid in the aftermath of a volcano-triggered tsunami that killed more than 400.

Medical workers have warned that clean water and medicine supplies were running low -- stoking fears of a public health crisis -- as thousands of displaced survivors cram shelters and hospitals. Many were left homeless by the killer wave.

The disaster agency said it has dispatched helicopters to drop supplies into a handful of hard-to-reach communities along the shattered coastlines of western Java and south Sumatra.

Hundreds of residents still stranded on tiny islands in the Sunda Strait, which separates Java and Sumatra, will be airlifted or taken by boat to shelters, the agency said.

Sniffer dogs are being used to find those still missing as grief-stricken relatives lined up at identification centres, but hopes of finding any survivors beneath the rubble have dwindled.

"The devastation there is pretty massive, but we had not been able to get in there in the first couple of days."

Some roads and bridges near isolated communities had been damaged, making road access more difficult, he added.

The powerful tsunami struck Saturday night without warning, sweeping over popular beaches and inundating tourist hotels and coastal communities, leaving a trail of death and destruction in its wake.

An eruption of the rumbling Anak Krakatoa volcano, which sits in the middle of the Strait separating Java and Sumatra, caused a section of the crater to collapse and slide into the ocean, triggering the tsunami, officials have said.

Anak Krakatoa is an island that emerged in the crater left by Krakatoa, whose massive 1883 eruption killed at least 36,000 people.

Experts have warned that volcanic activity at the site remains high and more deadly waves could slam the stricken region now covered by mountains of overturned cars, boats, furniture and other debris.

Many evacuees are too afraid to go home.

The Indonesian Red Cross said more than 400 staff and volunteers are delivering clean water, blanket, tarpaulins and other supplies, while it dispatched mobile medical units.

"Our teams are seeing many broken bones and broken homes, and people who are very shaken," said Arifin Hadi, head of disaster management at the Indonesian Red Cross.

"Indonesians have withstood a string of disasters this year and with them, so much loss and misery."

Jakarta has so far rebuffed offers of international aid, saying the disaster-prone country could handle the crisis.

The tsunami was Indonesia's third major natural disaster in six months, following a series of powerful earthquakes on the island of Lombok in July and August and a quake-tsunami in September that killed around 2,200 people in Palu on Sulawesi island, with thousands more missing and presumed dead.

On Wednesday, thousands were expected to pray for loved ones at mass graves and mosques Wednesday to mark the 14th anniversary of the 2004 Boxing Day tsunami.

It was one of the deadliest disasters in history, killing some 220,000 people in countries around the Indian Ocean, including some 168,000 Indonesians, most in Aceh at the northern tip of Sumatra.

Indonesia, a vast Southeast Asian archipelago, is one of the most disaster-hit nations on Earth due to its position straddling the so-called Pacific Ring of Fire, where tectonic plates collide.