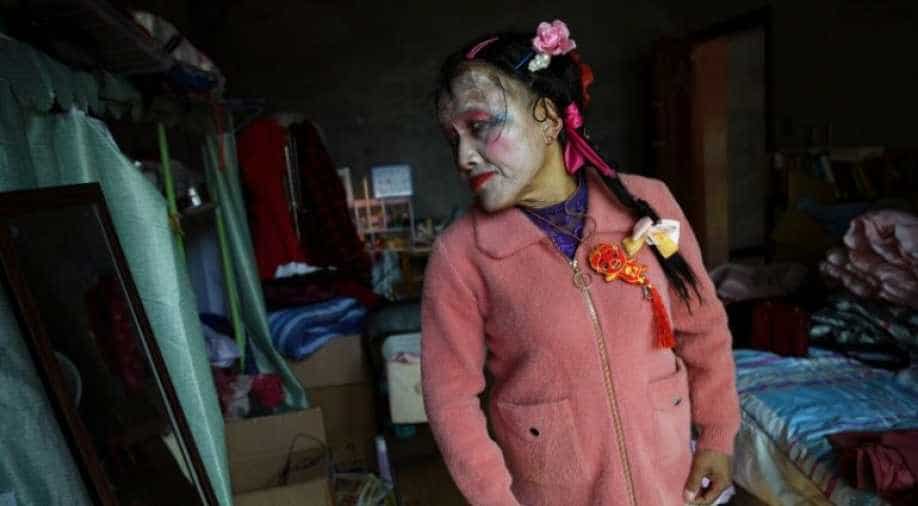 In 2012, news reports of a fire in a residential complex in the eastern city of Qingdao captured footage of a man returning to the premises dressed in female clothing with his hair in braids adorned with colourful ornaments

Morning market shoppers look a little too long in Liu Peilin's direction as she passes by in a red jacket and grey wig covered in red and pink clips, her cheeks rouged in bright pink and eyeshadow in a matching shade.

The 63-year-old has become well-known not only in the little southern Chinese village where she lives, but also nationally.

In 2012, news reports of a fire in a residential complex in the eastern city of Qingdao captured footage of a man returning to the premises dressed in female clothing with his hair in braids adorned with colourful ornaments.

The video went viral and Chinese netizens dubbed the man "Big Joy Brother", mocking him for his cross-dressing.

That was Liu, who had wanted to be a woman since she was a child but had suppressed the yearning for decades.

"At that time, it was not allowed," she said, referring to the Cultural Revolution, when people wore drab Soviet-inspired uniforms.

"I had to take the social factors into consideration and buried the idea deep down in my heart."

It was only in her 40s, after China's opening up, that Liu felt she could freely start wearing women's clothes.

Although her brief brush with viral fame gave her an unwanted nickname and invited online mockery, it also brought her into contact with a supportive community.

At the beginning of the year, she was facing eviction when her landlord in Qingdao decided to raise the rent.

People she met helped her move in March to Guanzhong village, just outside the southern city of Fuzhou.

She has also gained fans, who call her "Sister Liu". Many send clothes, swelling an expansive wardrobe. Others give her books and even art.

"We all know he is not a bad person," said a village official surnamed Lin, who declined to give his full name.

"But behaving as a woman, especially when he dresses up, doesn't look so good some people who don't know him think he's crazy."

Liu, who is unemployed, says she wants to undergo gender reassignment surgery, but lacks the funding. She documents her daily life by writing in her diary.

"I hope in the future I can have a normal life after changing my gender," said Liu.

"I want to get married and have a family. It doesn't matter if there's a kid or not. I want to find a companion and live a life."