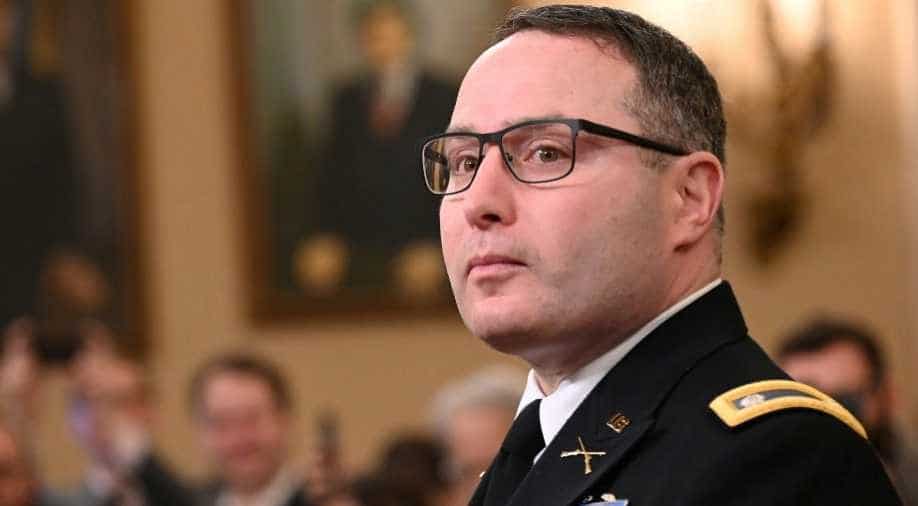 A White House official testified in the impeachment inquiry against President Donald Trump on Tuesday that the president's phone call urging Ukraine's leader to investigate Trump's political rivals was improper and blasted what he called "cowardly" attacks on witnesses in the investigation.

Vindman, who along with other witnesses has been publicly criticized by Trump, also told lawmakers that "vile character attacks" against public servants testifying in the impeachment inquiry were "reprehensible," urging Americans to be "better than callow and cowardly attacks." Vindman, an Iraq war veteran, appeared at the hearing wearing his Army uniform and medals.

Vindman did not specifically mention Trump when he referred to "cowardly attacks." Some Trump allies in the conservative media have questioned Vindman's loyalty to the United States.

"It is improper for the president of the United States to demand a foreign government investigate a US citizen and political opponent," Vindman said in his opening statement in the second week of public hearings.

The inquiry focuses on a July 25 phone call in which Trump asked Ukrainian President Volodymyr Zelenskiy to carry out two investigations that would benefit him politically including one targeting Democratic political rival Joe Biden. The other involved a debunked conspiracy theory embraced by some Trump allies that Ukraine, not Russia, interfered in the 2016 US election.

In her prepared statement to the committee, Williams said Trump's July 25 call was "unusual" because it "it involved discussion of what appeared to be a domestic political matter." Williams said the White House Budget office had said Trump's acting chief of staff, Mick Mulvaney, had directed that $391 million in security aid to Ukraine be put on hold and that she never learned why the assistance was later released in September.

Williams, who was attacked by Trump on Twitter just days before her public appearance, also told lawmakers that she was committed to serving America's interests, adding "it was with great pride and conviction that I swore an oath to uphold and defend the Constitution."

Williams was among the US officials who monitored the Trump-Zelenskiy call. She previously testified behind closed doors this month that some of Trump's comments were "inappropriate."

Trump assailed her on Twitter on Sunday as a "Never Trumper" who should "work out a better presidential attack." He has used the term "Never Trumper" to describe Republicans who oppose him. Trump has called them "human scum."

The investigation could lead the House to approve formal charges against Trump – known as articles of impeachment – that would be sent to the Republican-controlled Senate for a trial on whether to remove him from office. Few Republican senators have broken with Trump.

Volker, the former US special envoy to Ukraine, won praise from Republicans after he testified privately last month but can expect a cooler reception from Democrats during Tuesday's hearing.

Volker told lawmakers in October he did not know of any effort by Trump to press Ukraine to investigate Biden, a leading Democratic contender opposing Trump's bid for re-election next year, and Biden's son Hunter, who had served on the board of a Ukrainian energy firm called Burisma.

"Vice President Biden was never a topic of discussion," Volker said in his October 3 closed-door testimony.

But other witnesses have identified Volker as one of the "Three Amigos," along with Energy Secretary Rick Perry and US Ambassador to the EU Gordon Sondland, who were tasked by Trump to obtain Zelenskiy's commitment to probing the Bidens. Trump's personal lawyer Rudy Giuliani also was a central figure in trying to get Ukraine to carry out those investigations.

Among those whose previous testimony was at odds with Volker's deposition was Vindman.

Vindman and Volker have clashed, for example, over what occurred at a July 10 White House meeting. Volker testified that US and Ukrainian officials in the meeting did not discuss any investigations. Vindman said Sondland raised the need for Ukraine to open "specific investigations" if Zelenskiy wanted to have a coveted meeting with Trump.

At a follow-up meeting that both also attended, Vindman said in previous testimony: "Sondland emphasized the importance that Ukraine deliver the investigations into the 2016 election, the Bidens and Burisma."

Ahead of his request that Zelenskiy carry out the two investigations, Trump had frozen $391 million in US security aid approved by Congress to help Ukraine combat Russia-backed separatists in the eastern part of the country.

Democrats have accused Trump of using the frozen aid and Zelenskiy's desire for an Oval Office meeting as leverage to pressure a vulnerable US ally to dig up dirt on political adversaries. Trump is seeking re-election next year.

Trump has repeatedly denied wrongdoing and raged on Twitter against what he calls "a witch hunt" and a "hoax." He said on Monday he might testify before the House Intelligence Committee, which is leading the inquiry. Democrats responded with skepticism.