I didn't want to give the press the pleasure of seeing it: Trump on not wearing mask 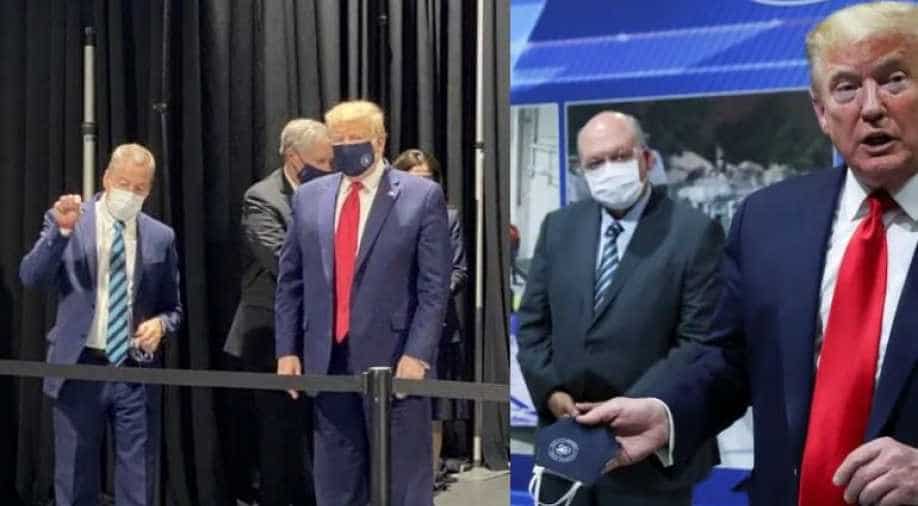 He was seen flouting the guideline issued by almost all health experts, even though two staff members at the White House have tested positive for coronavirus.

US President Donald Trump visited a Ford Motor Co plant on Thursday, and was spotted without a face ask yet again. He travelled to the crucial U.S. election battleground state of Michigan amid tensions with its Democratic governor during the coronavirus pandemic.

The Ford plant has been recently recast to produce ventilators and personal protective equipment. Ford organised a roundtable discussion with African-American leaders about the vulnerable populations hit by the virus.

While Ford has a policy of all guests wearing masks, Trump decided to break the rule. When asked by the local media, he said, "I had one on before. I wore one in the back area. I didn't want to give the press the pleasure of seeing it."

OMG! He actually wore one. See, it didn’t hurt that much. Does it have the Presidential seal on it? pic.twitter.com/aNebLbKpuE

While he wore the mask in the backside of the plant, he removed the mask as soon as he spotted media. He was seen flouting the guideline issued by almost all health experts, even though two staff members at the White House have tested positive for coronavirus.

All the Ford executives who were seen escorting the President were spotted with their face masks on. When the local media asked Ford Executive Chairman Bill Ford about Trump not wearing protective gear, he said, "It's up to him."

Trump jokingly added, "Honestly, I think I look better in a mask."

He has also said that the US will not be going under a lockdown if there is a second peak in the number of positive cases, and has urged the states to loosen the lockdown restrictions and let the economy rise again.

As the images of Trump wearing the mask were released on internet, Twitter put on its creative hat and came up with some funny memes about Trump and masks. We picked put some of the funniest memes:

It does make him look weak as he said to his aides. pic.twitter.com/fpyZHsiMWK

too bad that isnt duct tape (and on all the time)