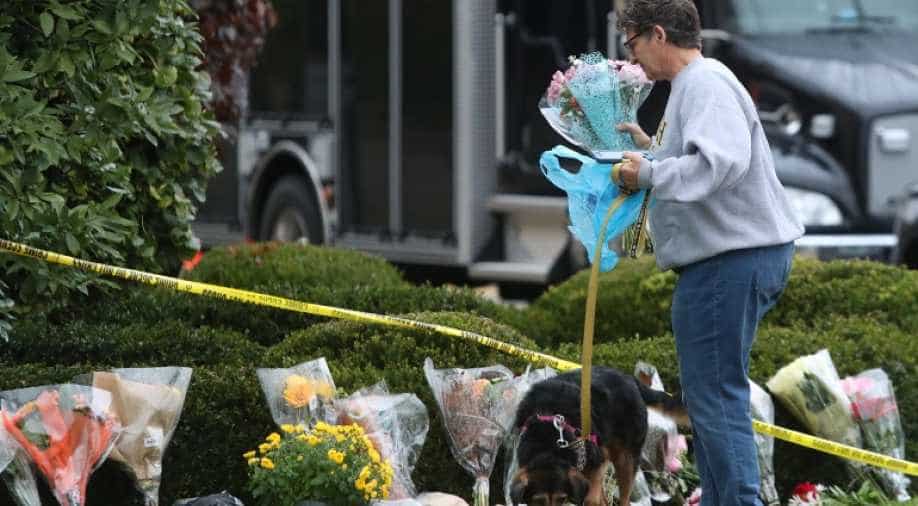 A woman brings flowers to an impromptu memorial at the Tree of Life synagogue following Saturday's shooting at the synagogue in Pittsburgh, Pennsylvania, US. Photograph:( AFP )

Here are some reactions to the attack from around the world:

The killing of 11 people in the deadliest anti-Semitic attack in recent United States history has sparked a flood of international condemnation and warnings about the rise of hate speech.

The gunman reportedly yelled "All Jews must die" as he sprayed bullets into the congregation on Saturday during Sabbath services at the Tree of Life synagogue in Pittsburgh, Pennsylvania.

Robert Bowers, the 46-year-old suspect taken into custody after a firefight with police, has been charged with murder and federal hate crimes that carry the death penalty.

Here are some reactions to the attack from around the world:

Pope Francis, at the end of the Angelus prayer in Saint Peter's Square, expressed his sadness at the violence.

"We are all, in truth, wounded by this inhuman act of violence," he said.

"May the Lord help us put out the flames of hate that develop in our societies, strengthening the sense of humanity, respect for life, moral and civil values and holy fear of God."

'Assault on all of us'

Donald Trump denounced the shooting as "a wicked act of mass murder."

"This evil anti-Semitic attack is an assault on all of us," Trump told supporters at an election rally in Illinois, urging people to "stand with our Jewish brothers and sisters to defeat anti-Semitism and vanquish the forces of hate."

His daughter Ivanka, a convert to Judaism, declared: "America is stronger than the acts of a depraved bigot and anti-Semite."

The attack sent a tremor of shock through America's Jewish community, the largest outside Israel.

In a statement, the United States Holocaust Memorial Museum said it "reminds all Americans of the dangers of unchecked hatred and anti-Semitism which must be confronted wherever they appear and calls on all Americans to actively work to promote social solidarity and respect the dignity of all individuals."

The Anti-Defamation League, a civil rights group, said it believes the Pittsburgh shooting to be the deadliest such attack in US history.

"It is simply unconscionable for Jews to be targeted during worship on a Sabbath morning, and unthinkable that it would happen in the United States of America in this day and age," it said.

"I was heartbroken and appalled by the murderous attack on a Pittsburgh synagogue today," Netanyahu said in a video message.

'No place in the 21st century'

UN Secretary-General Antonio Guterres called for a united front "to roll back the forces of racism, anti-Semitism, Islamophobia and other forms of hatred, bigotry, discrimination and xenophobia gaining strength in many parts of the world."

"Anti-Semitism is a menace to democratic values and peace, and should have no place in the 21st century," he said in a statement.

"We all have to stand up against anti-Semitism, everywhere," she said, in a brief statement posted on Twitter by a German government spokesman.

French President Emmanuel Macron said he "strongly condemned the act of antisemitism in Pittsburgh" in a tweet, adding that his thoughts were with the victims.

Canada's Prime Minister Justin Trudeau said in a tweet that "Canadians' hearts are with the Jewish community in Pittsburgh today."

"May the families of those murdered be comforted, and may the injured recover quickly and fully," he said.