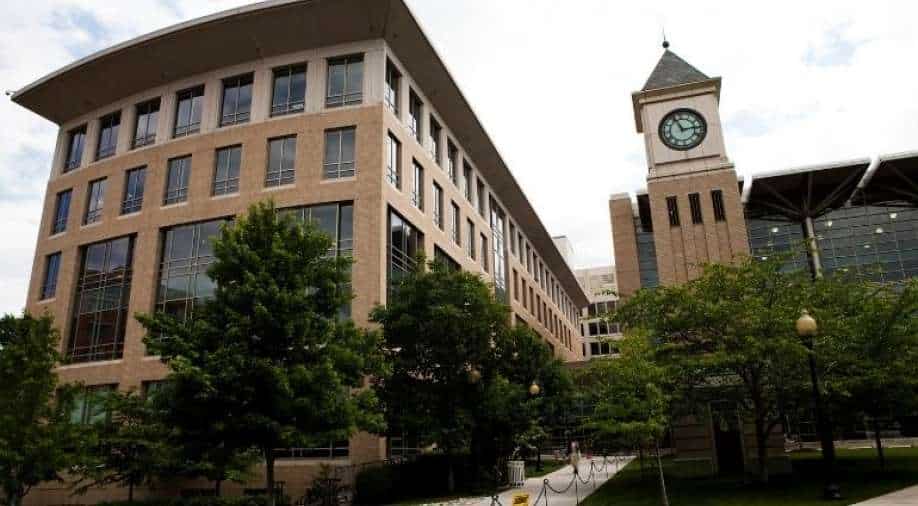 Georgetown Law in Washington, June 20, 2013. Georgetown University Law Center said on Thursday, March 11, 2021, that it had terminated an adjunct professor who made “abhorrent” remarks about Black students on a video call and had placed another adjunct w Photograph:( The New York Times )

In the clip, Sellers, a mediator with experience in intellectual property and high-tech disputes, discussed the evaluation of Black students with Batson after their virtual class had ended, according to the university.

Georgetown University Law Center said on Thursday that it had fired an adjunct professor who made “abhorrent” remarks about Black students on a video call and had placed another adjunct who was on the call with her on administrative leave.

The two adjunct professors, Sandra A. Sellers and David C. Batson, seemed to be unaware they were being recorded, according to a roughly 40-second clip of their conversation that generated widespread outrage after it was shared online.

In the clip, Sellers, a mediator with experience in intellectual property and high-tech disputes, discussed the evaluation of Black students with Batson after their virtual class had ended, according to the university.

“You know what? I hate to say this,” Sellers said on the video. “I end up having this angst every semester that a lot of my lower ones are Blacks — happens almost every semester. And it’s like, ‘Oh, come on.’ You know? You get some really good ones. But there are also usually some that are just plain at the bottom. It drives me crazy.”

As she spoke, Batson murmured, “Mm-hmm,” but did not challenge her remarks.

After the video prompted condemnation from students and alumni, the dean of the law school, William M. Treanor, said he had referred the matter to the university’s Office of Institutional Diversity, Equity & Affirmative Action, which had begun an investigation. He called the contents of the video, which the university learned about this week, “abhorrent” and said it “included reprehensible statements concerning the evaluation of Black students.”

“It includes conduct that has no place in our educational community,” Treanor wrote to the law school on Wednesday. “We must ensure that all students are treated fairly and evaluated on their merits.”

On Thursday morning, the university’s Black Law Students Association posted a letter to the administration calling for Sellers to be terminated and urging the law school to audit the grades and student evaluations in her past classes.

The video revealed not only Sellers’ “true beliefs about Black students,” the association wrote, “it is also illustrative of the conscious and unconscious bias systematically present in law school grading at Georgetown Law and in law school classrooms nationwide.”

In a second message to the law school on Thursday, Treanor said he had spoken to Sellers and Batson, “giving each the opportunity to provide any additional context.”

Batson has been placed on administrative leave and “will have no further involvement with the course in which the incident arose,” Treanor added.

“We are taking significant steps to ensure that all students in this class are fairly graded without the input of Professor Sellers or Professor Batson,” he wrote. “This is by no means the end of our work to address the many structural issues of racism reflected in this painful incident, including explicit and implicit bias, bystander responsibility, and the need for more comprehensive anti-bias training.”

Batson, a mediator and former senior counsel at the Environmental Protection Agency’s Office of Enforcement, did not immediately respond to emails on Thursday.

Sellers shared a copy of her resignation letter with The New York Times, in which she said she was “deeply sorry for my hurtful and misdirected remarks.”

“I would never do anything to intentionally hurt my students or Georgetown Law and wish I could take back my words,” Sellers wrote. “Regardless of my intent, I have done irreparable harm and I am truly sorry for this.”

Sellers said she had taught at Georgetown for almost 20 years and had wanted all her students to excel.

“When this does not occur, it reflects shortcomings on my part, not just on the part of any single student,” she wrote. “It is my responsibility to do all I can to correct this. My comments were the inarticulate reflection of long soul searching. I must do better to understand and address these issues.”

Hassan Ahmad, a Georgetown law student who shared the video on Twitter, said the discussion between the adjunct professors took place last month. Although the students in the class had logged off, the video system continued to record, he said, and uploaded the video to a class website.

It began to circulate in group chats, he said, and a student reported it to the administration on Monday. On Wednesday, Ahmad shared the video online, where it has been viewed more than 750,000 times.

“I was upset that it had not gotten a response from the school at that point,” Ahmad said.