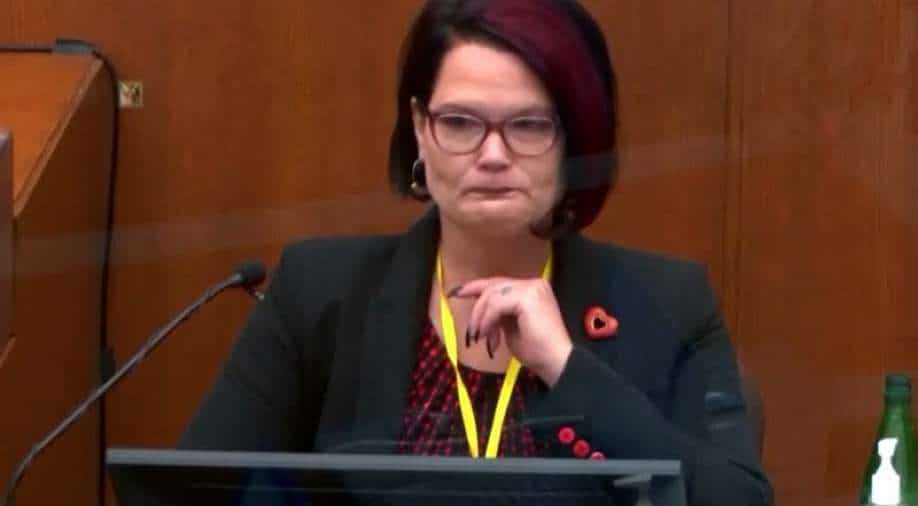 The death of Floyd had set off protests across the United States and around the world over racial injustice and police brutality against Black people.

The girlfriend of George Floyd, a 46-year-old Black man who was mercilessly killed by a police officer in Minneapolis last year, took the witness stand on Thursday. She spoke about how their relationship progressed, and how an addiction to painkillers took hold of their life together.

The death of Floyd had set off protests across the United States and around the world over racial injustice and police brutality against Black people -- in the form of Black Lives Matter movement.

Courteney Ross, 45, was the first witness who personally knew Floyd to testify at the trial of Derek Chauvin, the former Minneapolis policeman charged with murdering the man she loved by kneeling on his neck during an arrest last May.

In her testimony, Ross described how her romance with Floyd began in 2017 when he offered to pray with her. She also spoke about addiction: as with millions of other Americans, Floyd and Ross struggled to quit opioids.

They both suffered from chronic pain: Courteney's was in my neck, his was in his back.

Prosecutors wanted the jury to hear Ross's frank account of opioid use to undermine a central plank of Chauvin's defence in a trial seen as a litmus test of accountability in US policing.

Chauvin's lawyers argue that Floyd's death, which the county medical examiner ruled a homicide at the hands of police, was really an overdose from the fentanyl found in his blood at an autopsy.

Prosecutors have said Eric Nelson, Chauvin's lead attorney, has sought to raise the drug use in an effort to muddy Floyd's character and that the theory would be contradicted by medical evidence.

Nelson seemed to acknowledge the sensitivity when he stood up to cross-examine Ross: "I'm sorry to hear about your struggles with opioid addiction," he began. "Thank you for sharing that with the jury."

When asked by prosecutors in the fourth day of witness testimony how she first met Floyd, Ross said she first met Floyd in August 2017 at a Salvation Army homeless shelter, where he worked as a security guard. She was waiting in the lobby to visit the father of her son after closing up the coffee shop where she worked. Floyd approached her.

He sensed she felt sad and alone and offered to pray with her.

"It was so sweet," Ross said, dabbing a tissue to her eyes. "At the time I had lost a lot of faith in God."

They had their first kiss in the lobby that night and except an occasional break were together until his death, she said.

In his cellphone, Floyd listed Ross, a mother of two, as 'Mama.'

They took walks in the parks and around the lakes of Ross's native Minneapolis, which was still new to the Texas-raised Floyd, and dined out often: "He was a big man," she said, describing his daily weightlifting, "and it look a lot of energy to keep him going."

She said he adored his two young daughters and was a "mama's boy."

After his mother's death in 2018 he seemed "kind of like a shell of himself, like he was broken."

At times the couple took prescribed painkillers. At other times they bought OxyContin and other pills on the black market. Sometimes they beat the habit; sometimes they relapsed.
"Addiction, in my opinion, is a lifelong struggle," she said. "It's not something that comes and goes, it's something I'll deal with forever."

Ross said her last conversation with Floyd was on May 24, when they spoke on the telephone.

A day later, Floyd was pinned under Chauvin's knee, under arrest on suspicion of buying cigarettes at a food store with a counterfeit $20 bill.

The jury has heard three days' of testimony by onlookers who said they screamed at Chauvin and other officers, imploring them to check Floyd's pulse.

On Thursday, paramedics who arrived at the scene testified that they had to move police off Floyd, who by then had stopped breathing, had no pulse and whose pupils were dilated.