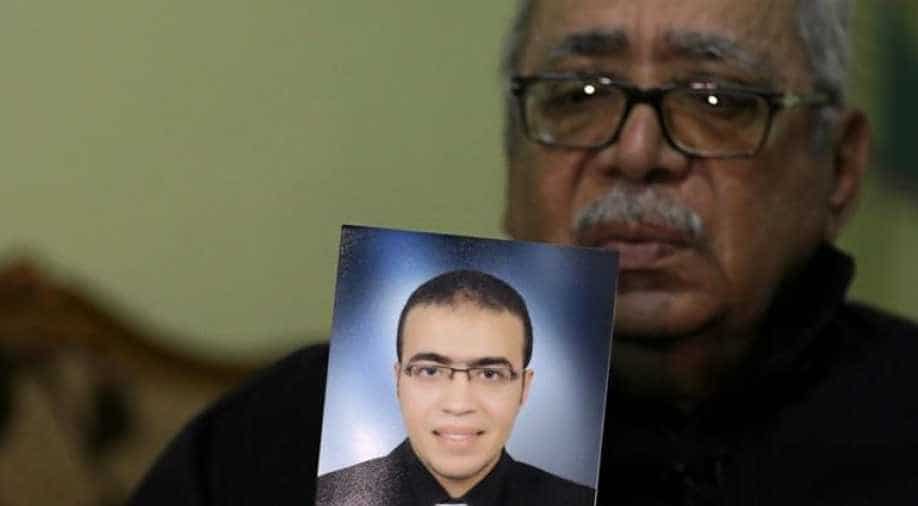 The father of Abdullah Reda al-Hamamy who is suspected of attacking a soldier in Paris' Louvre museum, holds a picture of his son during an interview. Photograph:( Reuters )

French investigators began questioning today a suspect in the attack on soldiers at the Louvre Museum in Paris, but the man refused to speak, a judicial source said.

The suspect, believed to be an Egyptian national, was shot in the stomach and seriously wounded after lunging at the soldiers with two machetes on Friday.

The attack was the latest in a string of assaults in France and thrust the issue of security back into the headlines three months ahead of the French presidential election.

Investigators decided to question him at his hospital bed after his condition improved, the source said.

The man "is refusing to speak to investigators for now", the source said, adding that investigators planned to question him again later today.

The suspect has been held at a Paris hospital since the attack near the museum on Friday morning.

Based on his phone and visa records, he is thought to be Abdallah El-Hamahmy, a 29-year-old Egyptian national living in the United Arab Emirates, who entered France legally on a flight from Dubai on January 26.

Investigators say the attacker, who was carrying two machetes and wearing a black T-shirt with a skull design, lunged at four soldiers shouting "Allahu Akbar" ("God is greatest").

President Francois Hollande said that "there is little doubt as to the terrorist nature of this act".

French investigators have contacted Egyptian officials in hopes of confirming the suspect's identity through DNA testing, a source close to the inquiry said.

They also plan to contact officials in the UAE and in Turkey, since Hamahmy's passport had two visas from Turkey, in 2015 and 2016.

Police are also examining Hamahmy's Twitter account after around a dozen messages were posted in Arabic just minutes before the attack.

"In the name of Allah... For our brothers in Syria and fighters across the world," he wrote, before referring to the Islamic State jihadist group in another tweet a minute later.

Speaking to AFP in Cairo yesterday, a retired police general, Reda El-Hamahmy, said he believed the wounded suspect was his son, Abdallah, who had been in Paris on a business trip.

But he said there were no signs his son had been radicalised.

"He went on a company trip and when it was over visited the museum. He was supposed to leave on Saturday," he told AFP, saying his son was married and his pregnant wife was currently staying in Saudi Arabia with their seven-month-old son.

Over the past two years, France has suffered a string of bloody attacks by Islamic extremists and has been under a state of emergency since November 2015.