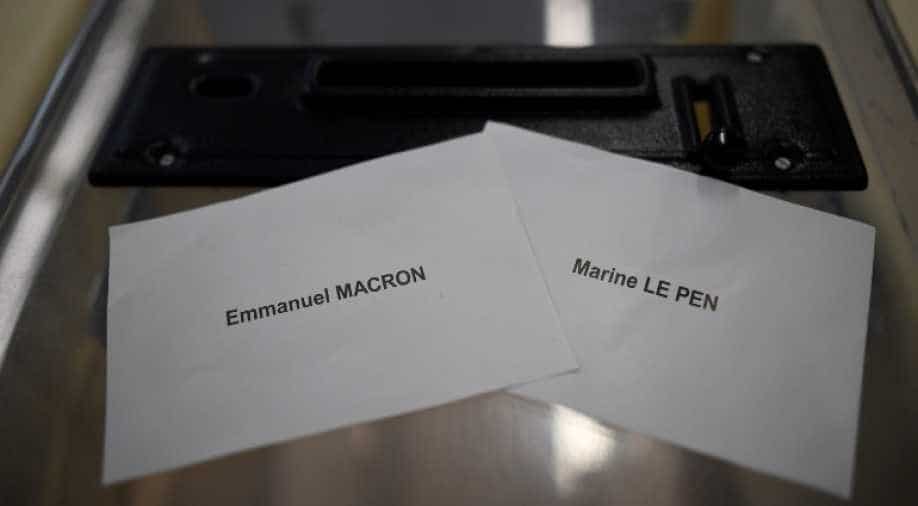 At the end of a battle that has increased in intensity in the final days, Macron appears to be gaining momentum according to new polls which showed him winning around 62 per cent to 38 per cent if Sunday's vote were held on Friday. Photograph:( AFP )

French presidential candidates Emmanuel Macron and Marine Le Pen wrapped up campaigning Friday ahead of this weekend's election as security concerns emerged again following the arrest of a suspected extremist.

Both centrist Macron and far-right Le Pen visited cathedrals and gave interviews as they sought to win over undecided voters ahead of their runoff on Sunday.

At the end of a battle that has increased in intensity in the final days, Macron appears to be gaining momentum according to new polls which showed him winning around 62 per cent to 38 per cent if Sunday's vote were held today.

The 39-year-old former economy minister under Socialist President Francois Hollande hit back at Le Pen's claim to represent the "voice of anger" at the country's political elite.

"Madame Le Pen is the voice of nothing, she exploits anger and hatred," Macron told RTL radio, echoing some of the bad-tempered clashes between the pair during a televised debate Wednesday night.

Pro-European Macron and anti-immigration Le Pen offered starkly different visions for France during a campaign that has been closely watched in Europe and the rest of the world.

Anti-racism protesters hurled objects at Le Pen and ally Nicolas Dupont-Aignan as they visited a cathedral in northern Reims, shouting "Marine, give back the money!"

She and her National Front (FN) party are being targeted by several investigations, including one into misuse of expenses in the European Parliament.

Reims is deeply intertwined with French history and Joan of Arc -- a nationalist symbol adopted by the FN.

Macron, who faced boos and heckles by leftist trade unionists as he visited a factory in the southern Tarn region on Thursday, went to a cathedral in southern Rodez on his last day of campaigning.

Security was brought to the fore again with news that police had arrested a suspected extremist close to an military airbase northwest of Paris.

Guns were discovered as well as a pledge of allegiance to the Islamic State (IS) and several of the group's flags, sources close to the case told AFP on condition of anonymity after the arrest in Evreux.

The suspect, a 34-year-old Muslim convert, was arrested early Friday after police found his car near the base.

An extremist shot and killed a police officer and wounded two others on Paris's Champs Elysees avenue three days before the first round of the presidential election on April 23 in an attack claimed by IS.

The Paris police department said the early-morning protest had exposed "flaws" in the security surrounding the world-renowned monument.

City and police officials announced immediate measures to reinforce patrols at the site, and plans to re-evaluate a video surveillance system.

Le Pen has tried to portray Macron as being soft on security and Islamic fundamentalism, playing to the concerns of many of her supporters after a string of terror attacks in France that have killed more than 230 people since 2015.

Le Pen sees her rise as the consequence of growing right-wing nationalism and a backlash against globalisation reflected in the election of US President Donald Trump and Britain's shock vote to leave the European Union.

She has said she wants to copy Britain's example and hold a referendum on France's EU membership, sending alarm bells ringing in capitals across the bloc.

In the first round of the election, she finished second behind Macron on 21.3 per cent after softening the FN's image over the past six years -- but without fully removing doubt about the party's core beliefs.

Macron is a pro-EU, pro-business and pro-trade reformer who quit the government last August to concentrate on his new centrist political movement En Marche, which has drawn 250,000 members in 12 months.

He won high-profile backing from former US president Barack Obama on Thursday, who said in a video that Macron "appeals to people's hopes and not their fears".

Speaking Friday, Macron said he had already chosen his future prime minister -- but even the person concerned had not been informed.

"Yes, this choice has been made 'in petto'," he told Europe 1 radio, using an Italian expression meaning "in my heart".

Macron said he would only announce his choice after he took over from President Francois Hollande, if he wins.

Le Pen has said she would appoint Dupont-Aignan -- a eurosceptic who was knocked out in the election's first round -- as her premier if she becomes president.