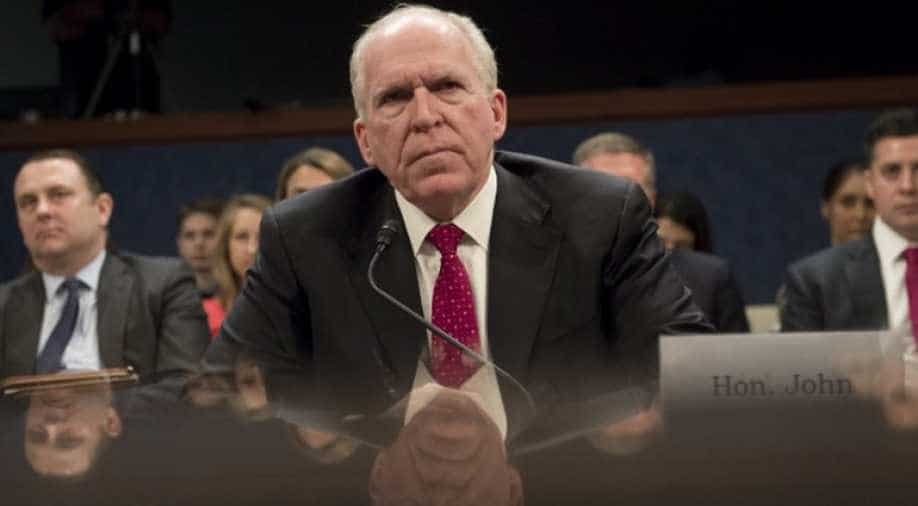 Brennan did not cite the names of the Trump aides that US intelligence agencies had eyed for their Russia contacts. Photograph:( AFP )

Brennan`s testimony before the House Intelligence Committee gave a much clearer view of how seriously US intelligence took the Russian threat, and why the FBI began investigating it in July, well before the American public was aware of the allegations.

"I encountered and became aware of information and intelligence that revealed contacts and interactions between Russian officials and US persons involved in the Trump campaign," Brennan said.

"I know what the Russians try to do," he told the committee. "They try to suborn individuals and they try to get individuals, including US persons, to act on their behalf either wittingly or unwittingly."

"Frequently, individuals on a treasonous path do not even realise they`re on that path until it gets to be too late," he added.

Brennan said he delivered a stiff telephone warning to his Russian counterpart, the head of the FSB spy agency, against meddling in early August, two months before US intelligence chiefs went public with their belief that Russia was trying to manipulate the election in Trump's favour.

"I said American voters would be outraged by any attempt to interfere in the election," Brennan said of the August 4 call.

"I warned him that if Russia pursued this course, it would destroy any near-term prospect for improvement of relations and would undermine constructive engagement even on matters of mutual interest."

Brennan did not cite the names of the Trump aides that US intelligence agencies had eyed for their Russia contacts. He also said that, when he stepped down from the CIA as Trump took office, he still did not know if there had been collusion.

"By the time I left office on January 20, I had unresolved questions in my mind as to whether or not the Russians had been successful in getting US persons involved in the campaign or not to work on their behalf," he said.

Nevertheless, he said, "It should be clear to everyone that Russia interfered in our 2016 presidential election process."

"And that they undertook the activities despite our strong protests and explicit warning they not do so."

Brennan's comments came as investigations by the Justice Department and several Congressional committees into Russian interference increasingly focus on several people tied to the president.

A number of former Trump aides have been summoned to testify by Congress and a grand jury.After the former CIA chief spoke, the White House again denied any links to Moscow.

"This morning`s hearings back up what we`ve been saying all along: that despite a year of investigation, there is still no evidence of any Russia-Trump campaign collusion," a spokesman said.

It also came after The Washington Post reported that Trump had pressed his Director of National Intelligence Dan Coats and National Security Agency Director Michael Rogers to publicly deny any evidence of ties between his campaign and Russia.

At a separate hearing of the Senate Armed Services Committee Tuesday, Coats, who was appointed by Trump, sidestepped questions about the Post report.

"I have always believed that given the nature of my position and the information which we share, it`s not appropriate for me to comment publicly on any of that," he said.

Brennan also meanwhile addressed news reports that Trump, in an Oval Office meeting this month with the Russian foreign minister and ambassador, shared highly classified information provided by a US ally about the Islamic State group.

If these reports are true, he said, Trump would have violated two intelligence protocols -- the need to share such information through established intelligence channels, and the need to warn the country which provided it, so as not to jeopardize sources or methods.

"It appears, at least from the press reports, that neither did it go in the proper channels nor did the originating agency have the opportunity to clear language for it," Brennan said.