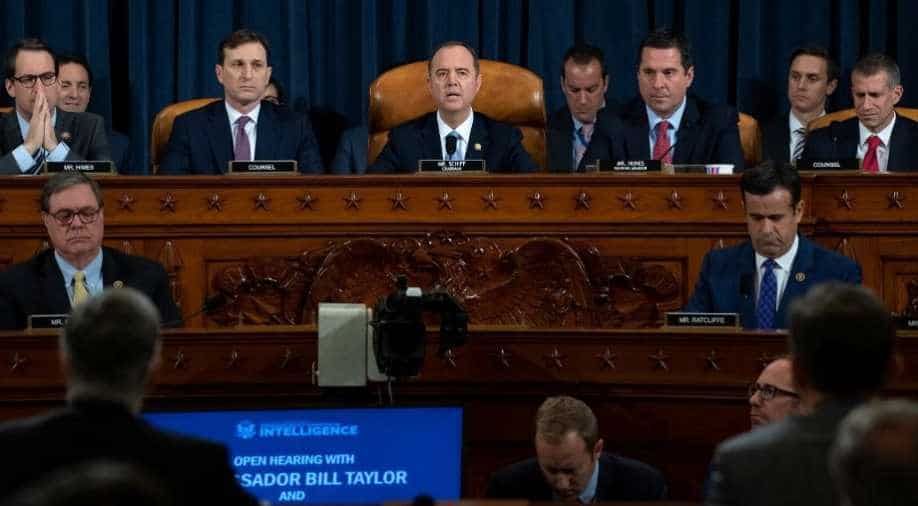 With a potential television audience of tens of millions looking on, two witnesses will testify before the House Intelligence Committee on Wednesday about whether Trump improperly pressured Ukraine for his own political benefit.

The impeachment inquiry into US President Donald Trump went public on Wednesday as lawmakers began their first televised public hearings, marking a new phase that could determine the fate of his tumultuous presidency.

With a potential television audience of tens of millions looking on, Democratic Representative Adam Schiff, chairman of the House of Representatives Intelligence Committee, gaveled open the historic session in an ornate hearing room packed with journalists, lawmakers and members of the public.

"The questions presented by this impeachment enquiry are whether President Trump sought to exploit that ally's vulnerability and invite Ukraine's interference in our elections?" Schiff said in his opening statement.

"Whether President Trump sought to condition official acts, such as a White House meeting or US military assistance, on Ukraine's willingness to assist with two political investigations that would help his re-election campaign? And if President Trump did either, whether such an abuse of his power is compatible with the office of the presidency?" Schiff added.

"The matter is as simple, and as terrible as that," Schiff added. "Our answer to these questions will affect not only the future of this presidency, but the future of the presidency itself, and what kind of conduct or misconduct the American people may come to expect from their Commander-in-Chief.

Two witnesses – William Taylor, the top US diplomat in Ukraine, and George Kent, the deputy assistant secretary of state for European and Eurasian affairs - will be the first to testify on Wednesday about whether Trump improperly pressured Ukraine for his own political benefit.

Taylor, a career diplomat and former US Army officer, previously served as U.S. ambassador to Ukraine and is now the chargé d'affaires of the US embassy in Kiev. Kent oversees Ukraine policy at the State Department.

Taylor and Kent, who had already agreed to testify but still received subpoenas to appear, arrived separately under heavy security, later taking their seats at the witness table, surrounded by news photographers.

Trump's fellow Republicans, who will also be able to question the witnesses, have crafted a defence strategy that will argue he did nothing wrong when he asked Ukraine's new president to investigate prominent Democrat Joe Biden, a former US vice president and key 2020 re-election rival.

This week's hearings, where Americans will hear directly for the first time from people involved in events that sparked the congressional inquiry, may pave the way for the Democratic-led House to approve articles of impeachment - formal charges - against Trump.

Both sides are playing to a sharply polarized electorate as they move deeper into a six-week-old investigation that has cast a shadow over Trump's presidency with the threat of being removed from office even as he campaigns for a second term.

It has been two decades since Americans last witnessed impeachment proceedings against a president, and these will be the first of the social media era. Republicans, who then controlled the House, brought impeachment charges against Democratic President Bill Clinton in a scandal involving his sexual relationship with a White House intern. The Senate ultimately voted to keep Clinton in office.

Only two US presidents ever have been impeached. No president has been removed through the impeachment process.

The focus of the inquiry is on a July 25 telephone call in which Trump asked Ukrainian President Volodymyr Zelenskiy to open a corruption investigation into Biden and his son Hunter Biden and into a discredited theory that Ukraine, not Russia, meddled in the 2016 U.S. election. Hunter Biden had worked for a Ukrainian energy company called Burisma.

Democrats are looking into whether Trump abused his power by withholding $391 million in security aid to Ukraine - a vulnerable U.S. ally facing Russian aggression - as leverage to pressure Kiev into conducting investigations politically beneficial to Trump. The money - approved by the U.S. Congress to help Ukraine combat Russia-backed separatists in the eastern part of the country - was later provided to Ukraine.

Trump has denied any wrongdoing, derided some of the current and former US officials who have appeared before committees as "Never Trumpers" - a term referring to Republican opponents of the president who he has called "human scum" - and branded the investigation a witch hunt aimed at hurting his re-election changes.

Before the start of the hearing, Trump continued to raise doubts about the witnesses' loyalties, tweeting "NEVER TRUMPERS" and reiterating a refrain echoed by his political supporters: "READ THE TRANSCRIPT."

A handful of protesters stood outside the Capitol building holding signs reading "Remove Trump" and "Trump Lies all the Time."

Some Republicans tried to put the focus on the impeachment process established by Democrats, complaining of an inability to call the witnesses they want and the lack of counsel for the president in the proceedings.

Taylor testified he had been concerned to learn that security aid to Ukraine, as well as a White House meeting between Trump and Zelenskiy, had been delayed for political reasons.

Kent said he had been alarmed by efforts by Trump's personal lawyer, Rudy Giuliani, and others to pressure Ukraine. Kent said Giuliani - who Democrats have accused of conducting a shadow foreign policy effort in Ukraine to benefit the president - had conducted a "campaign full of lies" against Marie Yovanovitch, who was abruptly pulled from her post as U.S. ambassador to Ukraine in May. She will give public testimony on Friday.

Taylor and Kent were testifying together because "they both were witness to the full storyline of the president's misconduct," an official working on the impeachment inquiry said.

For both sides, the electoral implications of the impeachment process is clear as it looms over other issues, such as the economy and immigration, as the 2020 election campaign gathers steam.

Democrats are hoping to convince independent voters and other doubters that Trump was wrong not only in asking Ukraine to dig up dirt on his rival but in making it a "quid pro quo" - a Latin meaning a favour in exchange for a favour.

Republicans want to paint the hearings as a partisan exercise by Trump's opponents who resented failing to gain more politically from former Special Counsel Robert Mueller's investigation that detailed Russian interference in the 2016 election to boost Trump's candidacy. Mueller documented extensive contacts between the Trump campaign and Russia but found insufficient evidence to prove a criminal conspiracy.