First funeral for synagogue massacre victims ahead of Trump visit 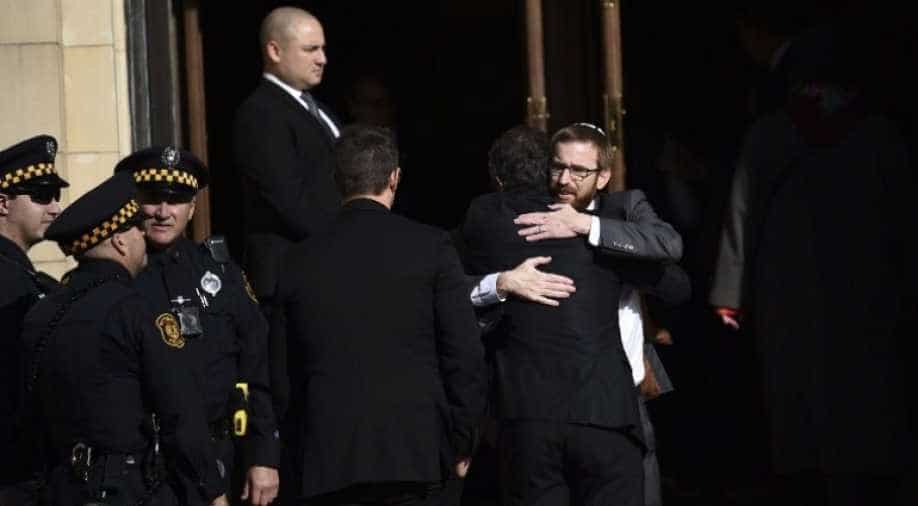 Men embrace outside the Rodef Shalom Congregation where the funeral for Tree of Life Congregation mass shooting victims Cecil Rosenthal and David Rosenthal who are brothers was held October 30, 2018 in Pittsburgh, Pennsylvania. Photograph:( AFP )

Trump's visit to the city has been contentious, coming amid a mounting row over whether his fierce rhetoric at campaign rallies and on Twitter has been partly responsible for stoking extremism ahead of November 6 midterm elections.

The first two victims of the deadliest anti-Semitic attack in recent US history will be laid to rest in Pittsburgh on Tuesday as the grieving city awaits a controversial visit by President Donald Trump and his wife Melania.

The funeral for Cecil and David Rosenthal -- brothers aged 59 and 54 who were among 11 people gunned down during prayers at the Tree of Life synagogue on Saturday -- was to be held at the Rodef Shalom temple.

Trump's visit to the city has been contentious, coming amid a mounting row over whether his fierce rhetoric at campaign rallies and on Twitter has been partly responsible for stoking extremism ahead of November 6 midterm elections, and a protest in Pittsburgh against the president has been called for Tuesday afternoon.

"There's always going to be anti-Semitism, there always has been, but never have we had a president of this country who does not fight hard against it, verbally and in every way. And he needs those supporters and that's why he doesn't," she said.

There was a huge turnout at Rodef Shalom, a 25-minute walk from the Tree of Life. Large pictures of the Rosenthal brothers were on display inside the lobby.

"There wasn't an ill thought in their body," Pittsburgh police detective Donald Pasquarelli, who provided security at Tree of Life events, told AFP outside the temple.

"When we worked events there, they were there always. They were the Tree of Life," he said.

The shooting spree allegedly carried out by Robert Bowers came in the same week that authorities arrested a Florida man -- an ardent Trump supporter -- on suspicion of mailing more than a dozen homemade bombs to opponents and critics of the president.

The two incidents have led to accusations that Trump has fanned violence through his almost daily tweets and speeches lambasting illegal immigrants, political opponents and journalists in divisive and hardline language.

Bowers had reportedly claimed on social media that Jews were helping transport caravans of refugees from Central America into the US, repeatedly calling the migrants "invaders."

The caravans are a favourite target of the president's anti-immigrant rhetoric, and he has called a group of several thousand impoverished mainly Honduran migrants currently attempting to walk north to the United States "an invasion."

Jeffrey Myers, a Tree of Life rabbi who was present when the attack started, told CNN that "the president of the United States is always welcome."

But a former president of the synagogue, Lynette Lederman, spoke out on the network on Monday to tell Trump to stay away, calling him a "purveyor of hate speech."

And a group of Pittsburgh Jewish leaders wrote an open letter to Trump Sunday telling him he bears responsibility for the shooting and saying he was not welcome in the city unless he took steps including denouncing white nationalism and ending "your assault on immigrants and refugees."

Trump has struck back in typically robust fashion, arguing that critical journalists were in fact the ones feeding extremism across the country.

"There is great anger in our Country caused in part by inaccurate, and even fraudulent, reporting of the news," Trump tweeted.

"The Fake News Media, the true Enemy of the People, must stop the open & obvious hostility & report the news accurately & fairly. That will do much to put out the flame of Anger and Outrage."

Trump's visit to Pittsburgh is not the only element of the administration's response to the massacre that has been a source of controversy.

On Monday, Vice President Mike Pence attended a campaign rally in Michigan at which a so-called "Christian rabbi" was invited to speak on behalf of the area's Jewish community.

Instead of opening up with prayers for the 11 victims of the Tree of Life shooting, Loren Jacobs praised Jesus Christ and then offered prayers for four Republican candidates.

At the end of the rally Pence, a devout Christian and hero of evangelicals, invited Jacobs back to say a prayer for the victims as "a leader of the Jewish community here in Michigan."

Jacobs then offered words for the dead in the form of a prayer to Jesus Christ, without naming any of them.