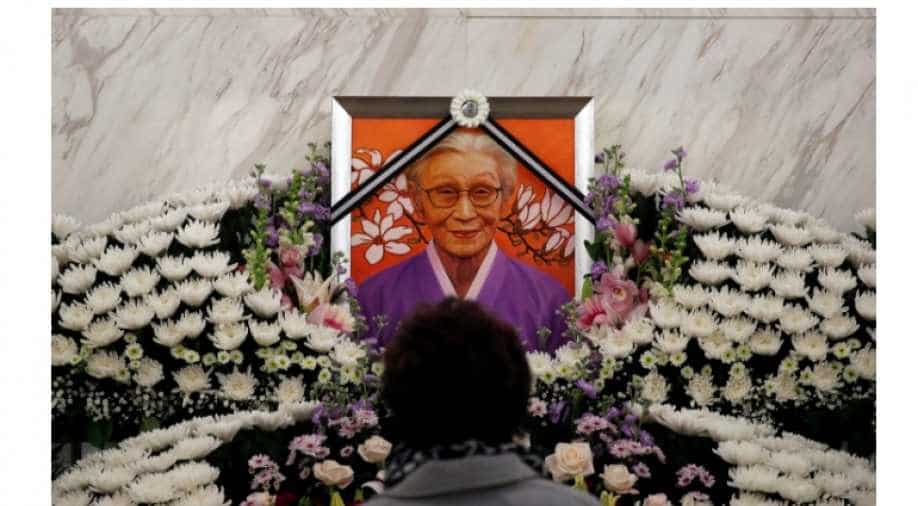 Kim, who died on Monday at a hospital in the South Korean capital of Seoul, was a fixture at weekly protests outside the Japanese embassy calling for a sincere apology and compensation.

At 93, Kim Bok-dong died as she had lived for many years: at the heart of the controversy over Japan's use of forced labour in its wartime brothels.

Kim, who died on Monday at a hospital in the South Korean capital of Seoul, was a fixture at weekly protests outside the Japanese embassy calling for a sincere apology and compensation.

She remained angry at Japan until the end, her supporters said.

"She suddenly opened her eyes yesterday and told a long story ... I couldn't decipher everything but one thing I could hear clearly was that we had to fight until the end," said Yoon Mee-hyang, who leads an advocate group for the women.

"Then she expressed strong anger toward Japan as she continued talking, before she regained her tranquillity," Yoon told Reuters.

Kim was among the two dozen known surviving South Korean "comfort women", a Japanese euphemism for women who were forced into prostitution and sexually abused at Japanese military brothels before and during World War Two.

Activists say they plan to march alongside Kim's casket past Japan's embassy on Friday, a demonstration that could further strain ties between Seoul and Tokyo.

The two Asian neighbours share a bitter history stemming from Japan's 1910-45 colonisation of the Korean peninsula.

South Korean President Moon Jae-in said during his visit to Kim's funeral home on Tuesday it was "heartbreaking" that victims die without a resolution of the issue.

In a separate post on Facebook, Moon said Kim revealed a "hidden history" by becoming one of the first victims to come forward in 1992.

Kim was 14 when she was first sent to a military brothel, and forced to provide sex for Japanese soldiers also in China, Hong Kong, Indonesia, Malaysia and Singapore, according to Yoon.

Articulate and charismatic, Kim was a vocal critic of a 2015 deal in which Tokyo apologised to the victims and provided one billion yen ($9.1 million) to a fund in Seoul to help them.

Kim said it was not sincere because some Japanese leaders continued to deny the women were forced to work in brothels.

"We won't accept it even if Japan gives 10 billion yen. It's not about money. They're still saying we went there because we wanted to," Kim told a parliamentary session in September 2016.

Moon's government has said it will not seek to renegotiate the 2015 deal. Last year it vowed to shut down the Japan-sponsored fund and pursue a more "victim-oriented" approach.

Japan says the claims have been settled by past agreements and apologies, and that the continued dispute may threaten relations between the two countries.

Only 23 registered South Korean survivors are still alive, highlighting a sense of urgency behind efforts by the women to receive a formal apology and legal compensation from Japan while their voices can still be heard.

Just hours before Kim passed away, a fellow victim only identifiable by her surname Lee had died, Yoon said.

Kim's defence of victims' rights earned the respect of one South Korean diplomat involved in their case.

"She was clever and unwavering under any circumstances," said the diplomat who did not want to be named.

"All she wanted was genuine atonement, and we fully respected it and felt sorry even when she wasn't happy with our work."