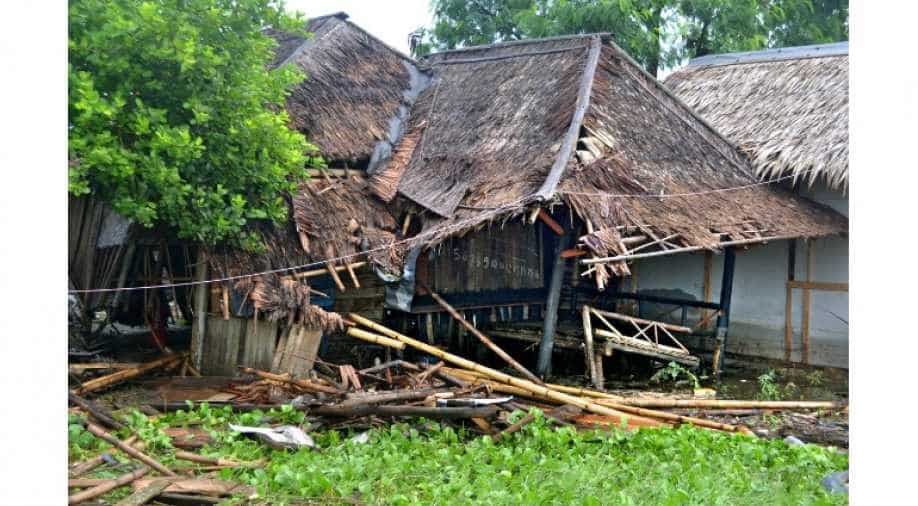 A house and a small shop are seen in Indonesia's Banten province after they were hit by the tsunami on Saturday. Photograph:( Reuters )

Indonesia sits on the seismically active Pacific Ring of Fire which is why it is regularly hit by earthquakes and tsunamis.

A tsunami killed at least 62 people on the Indonesian islands of Java and Sumatra and injured hundreds following an underwater landslide caused by a volcanic eruption on Saturday, the disaster mitigation agency said.

Indonesia sits on the seismically active Pacific Ring of Fire and is regularly hit by earthquakes. Here are some of the major quakes and tsunamis in recent years:

2004: A massive 9.1 magnitude quake on the western coast of Indonesia's Aceh province in northern Sumatra on December 26 triggered a tsunami that struck 14 countries, killing 226,000 people along the Indian Ocean coastline, more than half of them in Aceh.

2006: A 6.8 magnitude quake hit south of Java, Indonesia's most populated island, triggering a tsunami that smashed into the southern coast, killing nearly 700 people.

2009: A 7.6 magnitude quake struck near the city of Padang, capital of West Sumatra province. More than 1,100 people were killed.

2010: A 7.5 magnitude quake hit one of the Mentawai islands, off Sumatra, triggering a tsunami of up to 10 metres that destroyed dozens of villages and killed around 300 people.

2016: A shallow quake hit the Pidie Jaya regency in Aceh, causing destruction and panic as people were reminded by the devastation of the deadly 2004 quake and tsunami. No tsunami was triggered, but more than 100 were killed by fallen buildings.

2018: Major quakes hit Indonesia's tourist island of Lombok, killing more than 500 people, mostly on the northern side of the island.

2018: More than 2,000 people were killed by a powerful earthquake and tsunami that hit the city of Palu, on the west coast of Sulawesi island.