Ethiopian Military: We are at 'war' with Tigray region 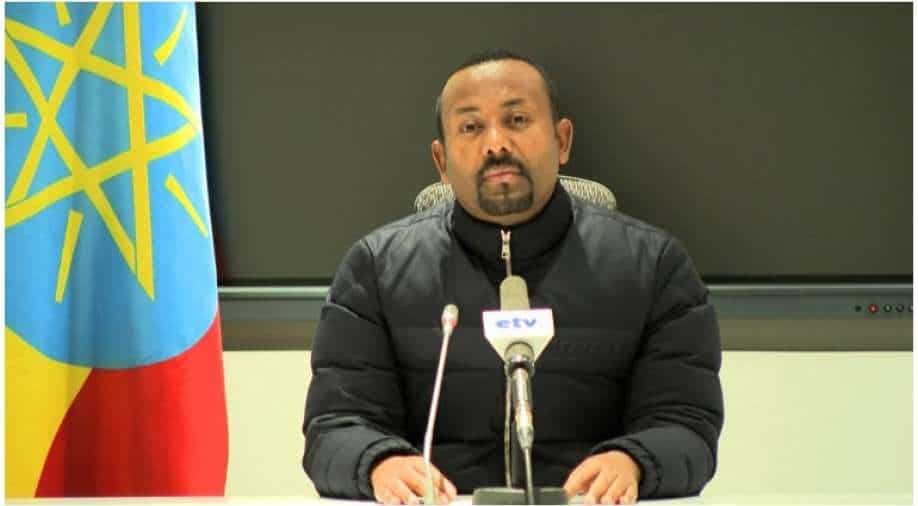 This frame grab from a video obtained from the Ethiopian Public Broadcaster (EBC) on November 4, 2020, shows Ethiopian Prime Minister Abiy Ahmed saying that he is ordering a military response to a deadly attack by the ruling party of Tigray, a region locked in a long-running dispute with Addis Ababa, on a camp housing federal troops. Photograph:( AFP )

Fighting between Ethiopian and Tigrayan sides continued and troops reportedly amassed at the region's borders. There is heated rhetoric from both sides

In a fresh signal that Ethiopia, Africa's second-most populous country was heading for an extended internal conflict, Ethiopian military regarded its conflict with Tigray region a "war" on Thursday.

"Our country has entered into a war it didn't anticipate. This war is shameful, it is senseless," Berhanu Jula, the deputy army chief, told a press conference in Addis Ababa.

Fighting between Ethiopian and Tigrayan sides continued and troops reportedly amassed at the region's borders. There is heated rhetoric from both sides.

"We're working to ensure the war won't come to the centre of the country. It will end there" in Tigray, Berhanu said.

Ethiopian PM Abiy Ahmed announced on Wednesday that he had ordered military operations in Tigray in response to an "attack" by the region's ruling party, the Tigray People's Liberation Front (TPLF), on a military camp there.

The TPLF denies the attack occurred and accuses Abiy of concocting the story to justify deploying the military against it.

"What has been initiated against us is clearly a war, an invasion," Tigray President Debretsion Gebremichael said at a press conference Thursday.

"This is a war we're conducting to preserve our existence," he added.

Debretsion said fighting persisted in western Tigray, and that federal troops were gathering on the border in neighbouring Amhara and Afar regions.

Ethiopian officials did not disclose the casualties although diplomats in Addis Ababa said that they were likey to take place on both sides.

Internet and phone connections in Tigray were cut for a second day, making any tolls difficult to verify.

Lawmakers in Addis Ababa on Thursday unanimously endorsed a six-month state of emergency in Tigray that had been announced the previous day by Abiy's government.

According to Ethiopia's constitution, under a state of emergency the government has "all necessary power to protect the country's peace and sovereignty" and can suspend some "political and democratic rights".

A senior government official told AFP that in Tigray this could lead to a curfew, searches without warrants, transportation and communications restrictions and the detention of "any person that [officials] suspect is taking part in illegal activities that threaten the constitutional order".

The state of emergency could also be extended beyond Tigray if needed, the official said.

Ahead of Thursday's vote, the Ethiopian Human Rights Commission, the national rights body, pointed to the need to maintain key services and supplies for civilians.

Lawmakers "should in particular consider ensuring humanitarian access and support including for food, medicine and other essential civilian services to avoid a complete blockage of communication and transport facilities," it said.

The fighting in Tigray has drawn expressions of concern from the UN, the US and the EU.

An official at the African Union told AFP Thursday that the body, headquartered in the Ethiopian capital Addis Ababa, was reaching out to "all actors" to try to bring a swift end to the conflict.

"The African Union is engaged in shuttle diplomacy in the region and with all actors at the moment to try to find some sort of solution. But it's clearly very sensitive right now," the official said.

"I know that everybody is clamouring for public pronouncements. The situation is so dire that it's really about the doing. A solution is not going to be found on Twitter."

However multiple diplomats said both Abiy's government and the TPLF did not currently seem open to negotiations.

Abiy's government has not revealed a timeline or a clear military objective for the campaign, though a spokesman for a newly-formed crisis committee said Wednesday the goal was to "liberate" the region from the TPLF.

The TPLF dominated politics in Ethiopia for nearly three decades before Abiy came to power in 2018 on the strength of anti-government protests.

Under Abiy, Tigrayan leaders have complained of being unfairly targeted in corruption prosecutions, removed from top positions and broadly scapegoated for the country's woes.

In previous weeks, tensions had been rising over control of military assets in the region.

The TPLF claims the military's Northern Command has broken with Abiy, though Abiy's office has dismissed this as false.