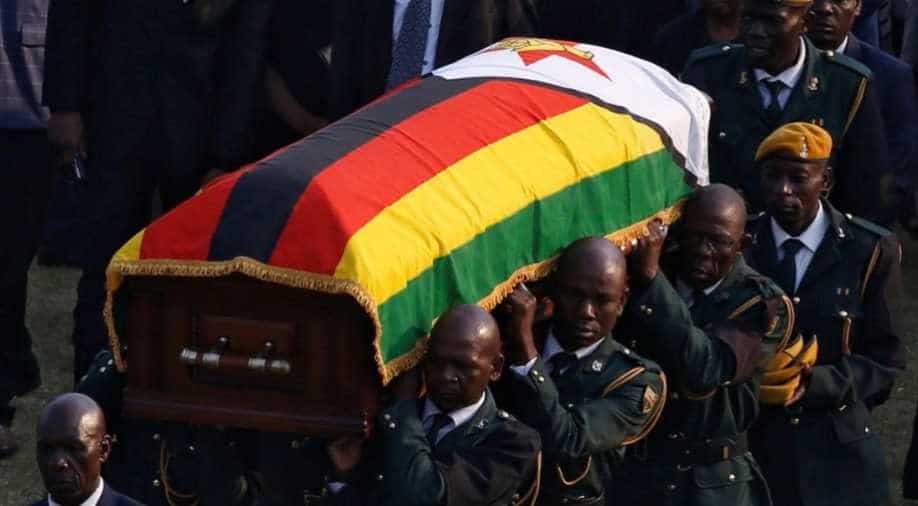 A casket carrying the remains of former Zimbabwean president Robert Mugabe is carried to the military chopper after his body lied in state at the Rufaro stadium, in Mbare, Harare, Zimbabwe. Photograph:( Reuters )

Mugabe, who died in Singapore aged 95, left Zimbabwe deeply divided over his legacy with the southern African country still struggling with high inflation and shortages of goods after decades of mismanagement.

Zimbabwe gave former leader Robert Mugabe a state funeral on Saturday with African leaders paying tribute to a man lauded as a liberation hero but whose 37-year rule was defined by repression and economic turmoil.

Mugabe, who died in Singapore aged 95, left Zimbabwe deeply divided over his legacy with the southern African country still struggling with high inflation and shortages of goods after decades of mismanagement.

Mugabe died last week on an overseas medical trip almost two years after former army loyalists forced him out in 2017, following a power struggle over what was widely perceived as his bid to position his wife Grace to succeed him.

Mugabe's casket draped in the green, black, gold and red Zimbabwe flag was marched slowly into the stadium, accompanied by a military band and an escort of officers. His wife Grace, in a black veil, and family followed behind.

"Let us put aside our differences and come together as we remember the past and look to the future as one proud, independent and free nation," Zimbabwe President Emmerson Mnangagwa said in a tweet.

Mugabe's body was returned from Singapore on Wednesday to a country he helped found as an anti-colonial guerrilla and pan-African leader who ended the white-minority rule and helped bring more education and healthcare to the poor black majority.

Later, Mugabe turned to repression and fear to crush dissidents and ruled for nearly four decades during which he becomes an international pariah for his takeover of white-owned farms.

"You can't talk about Zimbabwe without Bob. Zimbabwe is Bob. It took a man like Bob, his bravery, to get independence," said Norman Gombera, 57, a school principal in Harare. "Bob did his best under the circumstances. There is no country without a problem."

His final burial at a national monument will only happen after a new mausoleum is built in about 30 days. That decision was taken after his family ended a dispute with Mnangagwa, a former ally who turned against his rule in 2017.

Though lauded as an African icon, at home many Zimbabweans will remember Mugabe more for the economic mismanagement that forced millions to flee the country during decades of crisis.

Many are struggling to survive despite Mnangagwa's vows of more investment and jobs in the post-Mugabe era.

"The fruits of his tenure are the shortages. That is what we remember him for," said Steven, a consultant shopping nearby the stadium.

"He has made sure there is no opposition and he succeeded. There is no reason to go to his funeral."

Always divisive in life, Mugabe's funeral arrangements were also caught up in a dispute between Mnangagwa and the family over where and when the former leader should be buried.

The two parties on Friday finally agreed he should lie at National Heroes Acre. But the final ceremony would take place in about 30 days, once the new mausoleum was built for him there.

His family are still bitter over the role Mnangagwa played in his ouster and had pushed for Mugabe to be buried in his homestead of Zvimba, northwest of Harare.

A former guerrilla who fought alongside Mugabe against colonial forces, Mnangagwa was fired as first vice president by Mugabe in 2017. Mugabe had branded him a "traitor".

Soon after, protesters took to the streets and military officers pressured Mugabe to step down in what was widely seen as a struggle between Mnangagwa's faction and loyalists to Mugabe's wife Grace inside the ruling ZANU-PF party.

The "heroes" monument, where more than 130 national figures are buried in black marble tombs, sits on a hilltop overlooking Harare. Mugabe's first wife, Sally, is also buried there.