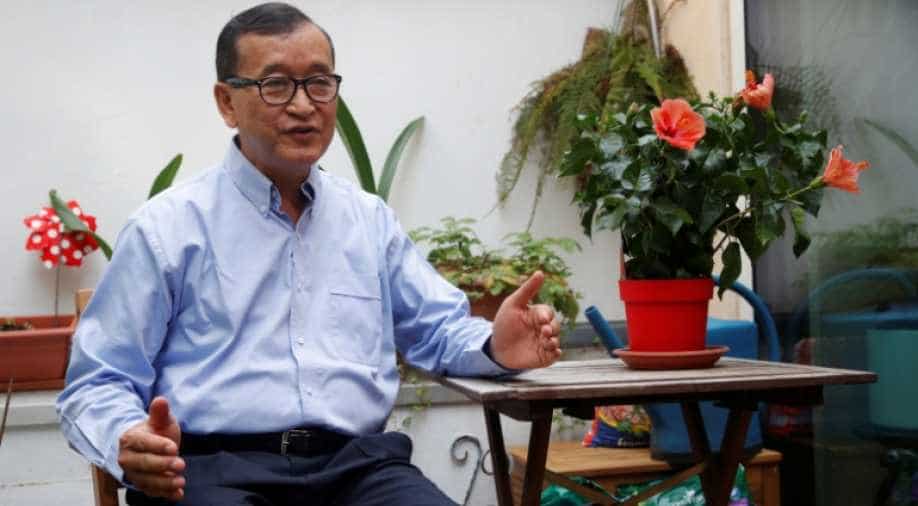 Long-time Prime Minister Hun Sen won every seat in the July vote and the European Union warned that it would strip Cambodia of its 'Everything but Arms' duty-free trading access.

Cambodia renewed calls for arrest of veteran opposition chief Sam Rainsy on Monday amid the threat of sanctions by the European Union, its biggest garment export market worth billions of euros a year, over human rights concerns.

Sam Rainsy's opposition Cambodia National Rescue Party (CNRP) was dissolved by the Supreme Court in 2017 and 118 CNRP members were banned from politics ahead of the 2018 general election.

Long-time Prime Minister Hun Sen won every seat in the July vote and the European Union warned that it would strip Cambodia of its "Everything but Arms" duty-free trading access.

Hun Sen this month threatened to retaliate against the opposition if the European Union withdrew duty-free trading access.

Sam Rainsy, who lives in France where he fled in 2015 after a conviction for defamation, has said that he will return to Cambodia sometime this year.

Two arrest warrants for Sam Rainsy from 2015 were republished in a messaging app Telegram for public officials on Monday for defamation and using false public documents and incitement to cause social instability.

A spokesman for the ruling Cambodian People's Party (CPP) warned that a third party might kill Sam Rainsy and blame the government if he returns.

Sam Rainsy didn't respond to a request for comment. He has said in the past that the convictions are politically motivated.

Cambodian businesses and unions urged the European Union last week not to withdraw trade preferences, saying such a decision would pose serious economic damage and harm millions of workers and their families, especially rural women.