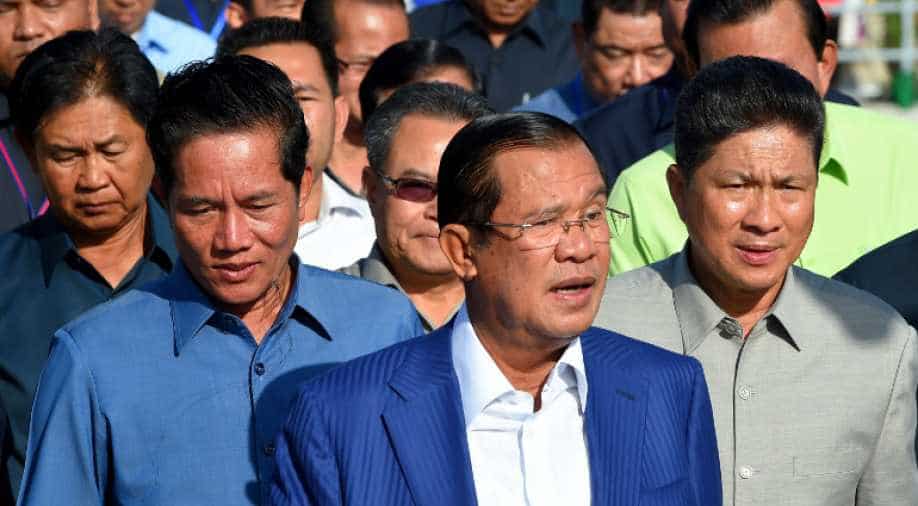 The co-founder of Cambodia's disbanded opposition has decried the landslide victory of Hun Sen's ruling party in an uncontested poll as a "terrible setback", urging a campaign of non-cooperation with the next government.

A provisional count from Sunday's poll has handed the Cambodia People's Party of strongman Hun Sen, who has ruled for more than three decades, all 125 parliamentary seats -- cementing the country's status as a one-party state.

The election was held without the only credible opposition, the Cambodia National Rescue Party, which was barred from running after it was dissolved by the Supreme Court late last year.

"It's a fake victory... a fake election, with a foregone conclusion," said CNRP co-founder Sam Rainsy, who lives in self-exile in Paris to avoid a slew of convictions he contends are politically motivated.

"It is a return to the old system, the one-party system, like during the Cold War, during the Communist times... it is a terrible setback for Cambodia," he told AFP in an interview given in France's southern Provence region.

Hun Sen has hailed Sunday's vote as "free, fair and just", with his party saying the estimated 82 per cent turnout made a mockery of CNRP calls for a boycott.

On Wednesday, his first public appearance since the electoral endorsement, Cambodia's ruler since 1985 said he is eyeing "big success" this year in "building the economy... and democracy".

But critics say the poll was held against a backdrop of local-level intimidation while dissenting voices in the media and civil society had been quieted in the run-up to the vote.

In the last elections in 2013, the CNRP took around 44 per cent of the popular vote -- threatening Hun Sen's hold on power.

The CNRP's leadership has since either been jailed, pressed into leaving the country or silenced by court cases and intimidation.

Rainsy urged his party's supporters to "mobilise to protest against this fake election" in a campaign of non-cooperation against any government that emerges from the landslide win.

He also said the international community should "reject" the result.

Cambodia and Hun Sen lent heavily on the Western world for aid and investment to rebuild the country from the ruins of decades of civil war, rule by the brutal Khmer Rouge and occupation by Vietnam.

But under fire from his old allies for his increasingly authoritarian bent, Hun Sen has in recent years turned to China for no-strings soft loans, investment and diplomatic ballast.

Washington and the European Union have condemned Sunday's uncontested poll, while Beijing offered its congratulations to the Cambodian people.