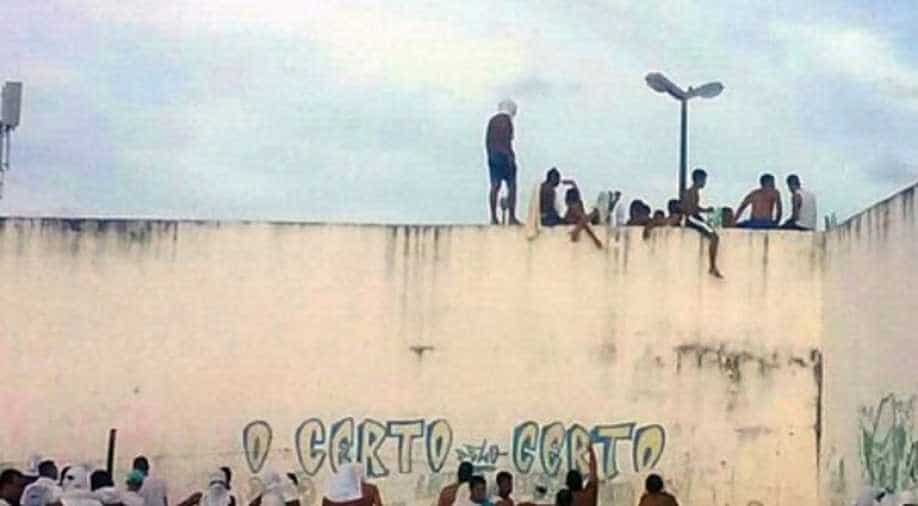 This is the third such incident this month. In photo: Inmates during a prison riot at the Alcacuz Penitentiary Centre near Natal, Rio Grande do Norte state, northeastern Brazil. Photograph:( AFP )

Brazilian police on Sunday quelled a riot that left at least 10 people dead in a northern jail, the latest of several gruesome gang-related massacres in the country's overcrowded prisons.

Officials raised the death toll from Saturday's riot at the Alcacuz prison from three to 10. They earlier said at least three inmates were beheaded.

Security forces stormed the prison in northeastern Rio Grande do Norte state at dawn on Sunday and restored order after 14 hours of violence, local authorities said.

Officials said members of two separate drug gangs had come out of different parts of the prison and clashed violently.

"There are at least three inmates dead because we were able to see their heads," state prisons manager Zemilton Silva told local media on Saturday.

District security authorities said in a statement on Sunday that there were "at least 10 confirmed deaths."

"We cannot yet confirm the final number of victims. We are going to verify the extent of the damage," district security official Caio Berreza said on Globo News television.

The prison, just outside the state capital Natal, is built for a maximum of 620 inmates but currently houses 1,083, the state justice department said.

Brazilian media said the riot was thought to be a clash between Brazil's biggest drug gang, the First Capital Command (PCC), and a group allied to its main rival Red Command.

It was believed to be part of a war between drug gangs battling for control of one of the world's most important cocaine markets and trafficking routes.

A series of massacres early this month left 100 prisoners dead — many of them active members of gangs, authorities said.