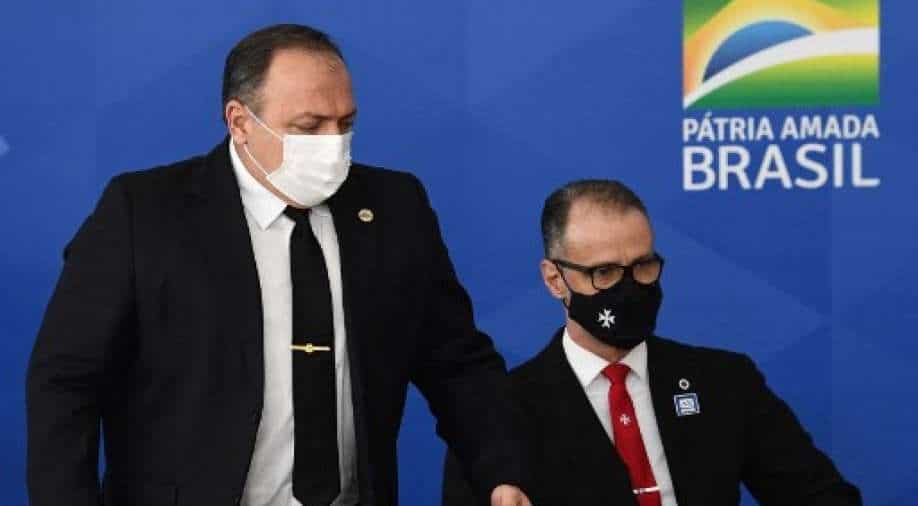 Brazil is currently going through its worst weeks of the pandemic. It registered a new 24-hour record of 2,841 deaths Tuesday, bringing the number of people killed by COVID-19 in the country to more than 282,000 -- second only to the United States.

Bolsonaro, who has defied expert advice on handling the new coronavirus, is facing pressure to contain an explosion of cases that is pushing Brazil's hospitals to the brink and threatening his own chances at re-election next year.

In a change of course, the president named respected cardiologist Marcelo Queiroga as his new health minister Monday, replacing Eduardo Pazuello, an army general with no prior medical experience.

Queiroga, who will be Bolsonaro's fourth health minister of the crisis, hinted at a policy rethink in the administration.

"We plan to reduce the number of deaths with two main points: social distancing policies to reduce the spread of the virus, and expanding our hospitals' capacity," he told a news conference, speaking alongside the outgoing minister.

Brazil is currently going through its worst weeks of the pandemic.

It registered a new 24-hour record of 2,841 deaths Tuesday, bringing the number of people killed by COVID-19 in the country to more than 282,000 -- second only to the United States.

Queiroga, 55, called for "unity" among Brazilians, who are deeply divided over Bolsonaro's attacks on stay-at-home measures, face masks and vaccines.

The new minister said the president had promised him "autonomy" on pandemic policy.

"We will make the necessary adjustments when the time is right," he said, speaking at the ceremonial delivery of 500,000 doses of the Oxford-AstraZeneca vaccine.

"We believe in research, in science."

Bolsonaro has seen his disapproval ratings rise as the pandemic continues to hammer the country of 212 million people.

A new poll from Datafolha found 54 percent of Brazilians consider his handling of the pandemic bad or terrible, while 56 percent said he was not fit to lead the country -- up six points from January.

The director of the Pan American Health Organization, Carissa Etienne, called the recent surge in cases and deaths in Brazil troubling.

"The situation in Brazil is a cautionary tale that keeping this virus under control requires continuous attention by public health authorities and leaders to protect people and health systems alike from the devastating impact of this virus," she said.