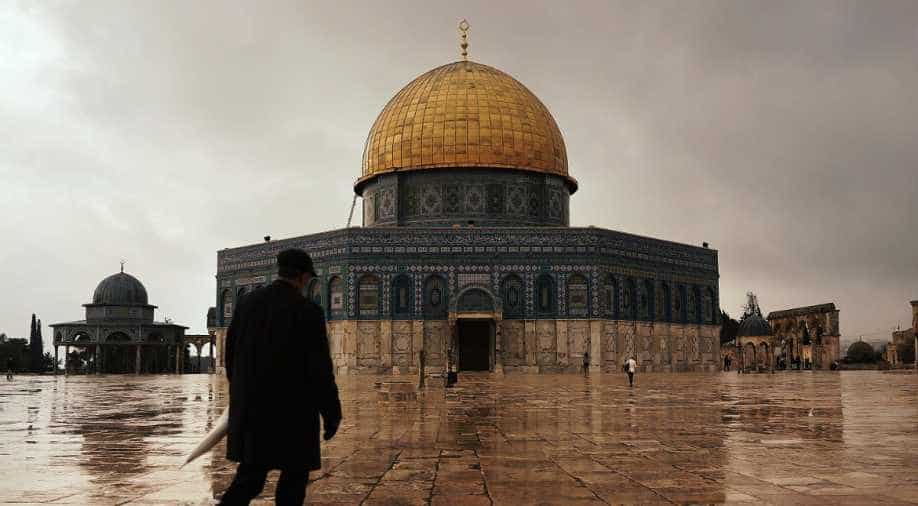 A bill to ban mosques around Israel and annexed east Jerusalem from using loudspeakers to amplify late night and early morning azans, has been approved by a ministerial committee ahead of a parliamentary debate and voting. Photograph:( Getty )

It is 4:30 am and Mufeed Shawana is rushing to Al-Aqsa Mosque, as the first Muslim call to prayer of the day rings out across the Old City of east Jerusalem.

But he stops short when asked how he feels that the sound echoing from the minarets could soon be dampened.

A bill backed by Prime Minister Benjamin Netanyahu to ban mosques around Israel and annexed east Jerusalem from using loudspeakers to amplify late night and early morning azans, or calls to prayers, has been approved by a ministerial committee ahead of a parliamentary debate and voting.

It has been temporarily blocked but the government is still confident of pushing it through.

Shawana argues that nobody would deny Jews their own religious rituals, which are "their right".

"This is our right," he adds, before disappearing inside the mosque to pray.

The dispute around high-decibel minarets is not unique to Israel, which argues that other states, including in Europe and North Africa, have similar restrictions to those it is looking to implement.

But it has touched a raw nerve in Israel, where many in its minority Arab population -- around 17.5 per cent of the whole and overwhelmingly Muslim -- believe Netanyahu's rightwing government is systematically persecuting them.

They also worry that their connection to Al-Aqsa, the third holiest site in Islam, is under threat.

Large numbers of Israeli Jews view the azans as noise pollution, with the bill's sponsor Motti Yogev, of the far-right Jewish Home party, arguing they disturb the peace of hundreds of thousands of people.

He has also claimed that in some cases they are used by religious leaders to incite against Israel.

In its current draft, the law would prevent the summons to worshippers between 11:00 pm until 6:00 am from being relayed on loudspeakers.

Palestinians and Arab Israelis have organised protests against the ban, with an Arab Israeli MP performing the azan in Israel's parliament to the fury of some of his Jewish colleagues.

Government watchdogs call the bill a threat to religious freedom and the Arab League has termed it "a very dangerous provocation".

Arab Israelis, who largely identify as Palestinians, are the descendants of Palestinians who remained on their land after the creation of the state of Israel in 1948.

Beit Safafa in southern Jerusalem is an Arab village flanked by Jewish neighbourhoods, including the area of Pat, a few hundred metres (yards) away.

In a passionate sermon at Beit Safafa's mosque, Najih Qiraat, a religious leader from Al-Aqsa visiting for the weekly Friday prayers, railed against the Israeli plans.

For Israelis in Pat, turning the volume down is only fair and they accuse the Palestinians of being unreasonable.

"We are a Jewish neighbourhood next to an Arab village -- the noise is terrible. I have a little kid who cannot sleep," said Ayelet Sadeh, 42.

Just like Qiraat and Shawana, she sees calculated malice rather than cultural misunderstanding behind the actions of the other side.

She points to the Jewish holiday of Yom Kippur, when life in Israel grinds to a standstill for a day, as an example  -- pointing out Muslim prayers also continue on that day.

"Sometimes," she said, "it feels like they are doing (it out of) spite."

Health Minister Yaakov Litzman of the ultra-Orthodox party United Torah Judaism blocked the bill as he was worried it would silence the weekly siren alerting Jews to the start of the Sabbath, or holy day.

An Israeli official told AFP the authorities were confident they'd find a way to pass the bill "while protecting religious freedom for all and the right of all to be free from excessive noise".

There are more than 400 mosques in the country, including east Jerusalem, according to Israeli government figures, and implementing any law could be tough.

"Day and night, until the occupation understands they cannot interfere in religious issues."