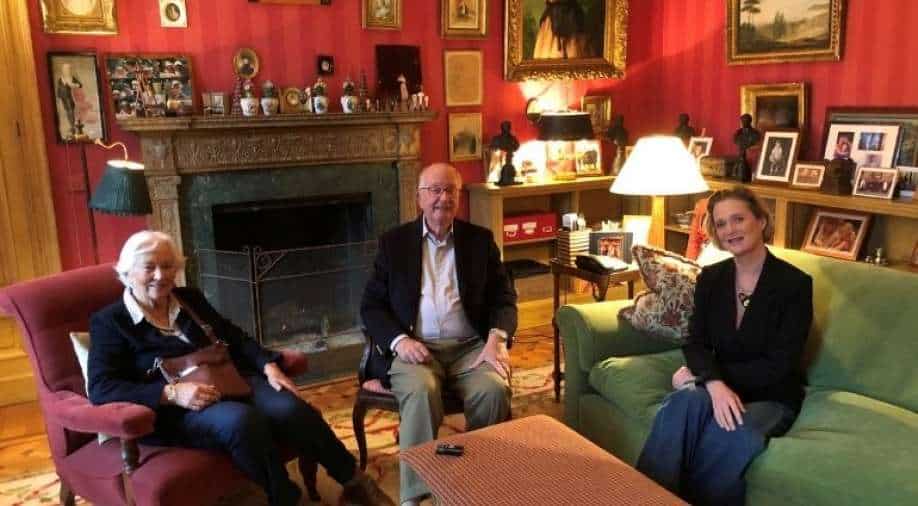 King Albert of Belgium and Queen Paola pose with a Belgian artist, Princess Delphine de Saxe-Cobourg, known also with her former name Delphine Boel, after she has been recognised as the daughter of Belgium's former King Albert II, becoming officially a pr Photograph:( Reuters )

Belgium's former King Albert has met his daughter Delphine for the first time, after she won a seven-year legal battle to prove that he is her father, earning recognition as a princess

Belgium's former King Albert has met his daughter Delphine for the first time, after she won a seven-year legal battle to prove that he is her father, earning recognition as a princess.

The two met Albert's wife, Queen Paola, last Sunday at their royal residence, the Belvedere castle, in the Brussels suburb of Laeken, the royal household said on Tuesday.

"This Sunday October 25, a new chapter has opened, filled with emotions, calm, understanding and also hope," the king, the queen and Delphine said in a statement.

"Our meeting took place at the Belvedere Castle, a meeting during which each of us was able to express, calmly and with empathy, our feelings and our experiences."

"After the turmoil, the wounds and the suffering, comes the time for forgiveness, healing and reconciliation. This is the path, patient and at times difficult, that we have decided to take resolutely together."

Delphine Boel, 52, a Belgian artist, fought a seven-year legal battle to prove that the former king is her father. After a DNA test confirmed that, a court granted her the title of princess earlier this month. Albert, 86, who abdicated six years ago in favour of his son Philippe, had long contested Boel's claim.

She has since changed her surname from Boel to Saxe-Cobourg, her father's family name.

Delphine had previously met Philippe for the first time on October 15.

Until then, she said her father and siblings, including Philippe, had refused to communicate with her and she was not expecting anything from them.

"These first steps pave the way which is now up to us to follow peacefully," the statement said.