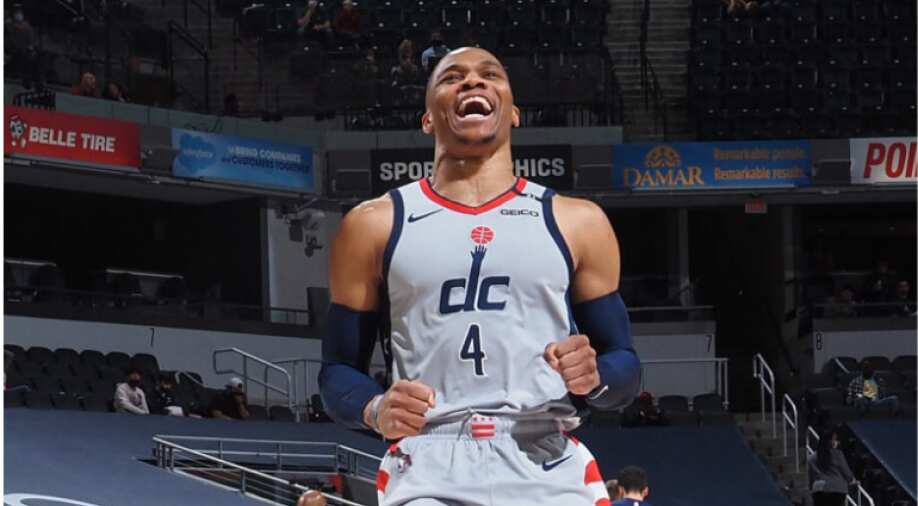 Washington's Russell Westbrook notched the 181st triple-double of his career on Saturday, tying Oscar Robertson for the most in N

Washington's Russell Westbrook notched the 181st triple-double of his career on Saturday, tying Oscar Robertson for the most in NBA history.

Westbrook matched Robertson with his 10th assist of the night in the third quarter of the Wizards' 133-132 overtime victory over the Pacers in Indianapolis.
Westbrook finished with 33 points, 19 rebounds, and 15 assists, draining the go-ahead free-throws with one second left in overtime then blocking the Pacers' last shot.
Bradley Beal scored 50 points for the Wizards, so it was no surprise that when Westbrook secured his triple-double with his 10th assist late in the third it was with an arching pass to Beal for a floater in the lane.

Westbrook has 35 triple-doubles on the season -- including 25 in his last 32 games.
"Man, it's unbelievable," Westbrook said of matching Robertson, who played from 1960-74. "I'm truly blessed and thankful. I'm just thankful for everybody along the way along this journey."

Grateful to Oscar
It's not the first time Westbrook has etched his name alongside that of Robertson.
Westbrook was playing for the Oklahoma City Thunder in 2017 when he broke Robertson's single-season record with 42 triple-doubles -- recording double digits in three major statistical categories in a feat that has become a measuring stick of all-around excellence.
In that 2016-17 season, he joined Robertson as the only player to average a triple-double for the season -- which Westbrook has now done for the fourth time in five years.

"To be in conversation with Oscar, one, I want to just thank him because he set the stage," Westbrook said. "He sacrificed a lot of things for us to be able to go out and play, and the times he played in and the things he was able to do back in the day has allowed me to be able to do things I want to do today.

"Just grateful for him, grateful for his words and appreciative of his support, as well," added Westbrook, who can pass Robertson on Monday when the Wizards play the Hawks in Atlanta.

Los Angeles Lakers great Magic Johnson is third on the NBA's all-time triple-double list with 138 and Jason Kidd is fourth on 107.
Current Lakers superstar LeBron James is the only other active player in the top five, with 99 career triple-doubles. But Westbrook had his eye on a different stat, as the narrow victory in a game that featured 33 lead changes saw the Wizards inch ahead of the Pacers into ninth place in the Eastern Conference standings.
The seventh through 10th-placed teams will compete in the play-in tournament for a berth in the playoffs proper.

"I take so much pride in going out and leaving everything I have on the floor," Westbrook said. "Tonight was another one of those nights where you've got to grind it out and figure it out."

Beal, who took a knock early but returned to the game before departing for good late in the fourth, wasn't on the floor when Westbrook blocked Caris LeVert's attempted game-winner for Indiana -- taking care not to foul him.

"I used my left hand on purpose," he said. "I tried to swipe left so I could go by him and block the shot.
"I'm happy it worked this time. Fortunately, we got the win -- a big win for us, it moved us up in the standings a little bit."