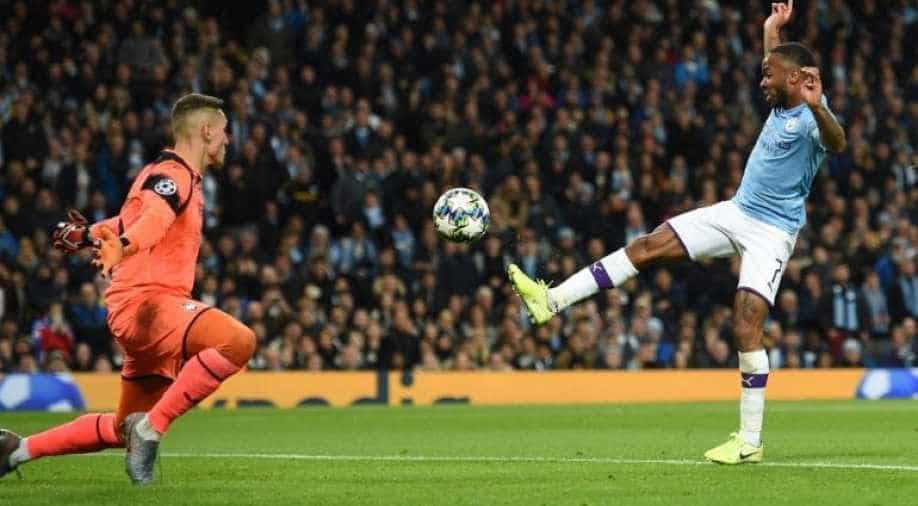 Guardiola's side was rocked by Ruslan Malinovsky's first-half penalty in the Champions League clash at the Etihad Stadium.

Guardiola's side was rocked by Ruslan Malinovsky's first-half penalty in the Champions League clash at the Etihad Stadium.

But City responded superbly as Sergio Aguero struck twice before the interval.

Sterling had provided the assists for both of Aguero's goals, but the England star was just getting warmed up.

After the interval, Sterling struck three times to complete a personal masterclass that underlined his rise in the Guardiola era from enigmatic playmaker to lethal finisher.

Sterling has emerged as City's driving force over the last 18 months and his second hat-trick of the season confirmed his place among the world's best players.

"All the credit is for him. He's a guy whose physicality is incredible. He is so strong," Guardiola said.

"A day after a game, he could play another. His regeneration is incredible and he can play both sides. He is an extraordinary player."

Asked if the 24-year-old could get even better, Guardiola added: "It depends on him, his desire, and I think he has that."

The only frustration for Guardiola was a late red card for young midfielder Phil Foden.

"He will learn. He will know after one yellow card the need to be more careful," Guardiola said.

"It was an incredible effort because they have a lot of quality. That is why I am so satisfied with the result," Guardiola added.

Atalanta, making their Champions League debut this season, are still searching for their first point after a third consecutive defeat.

Guardiola had called on City to show they have the mentality to conquer the "little margins" needed to win the Champions League for the first time.

This was the perfect response as they recovered from falling behind in the 28th minute.

For the second successive game, Guardiola had responded to City's defensive injury problems by deploying midfielders Fernandinho and Rodri as his two centre-backs.

It was an uncomfortable arrangement and when Josip Ilicic advanced into the City area, Fernandinho rashly stuck out a leg to trip the Atalanta winger and concede a penalty.

Malinovsky sent Ederson the wrong way with the spot-kick as City conceded their first goal in this season's tournament.

That blow woke City from their slumber and Aguero made up for his earlier miss with the 34th-minute equaliser.

Sterling deserved much of the credit for a penetrating run and delicate cross that allowed Aguero to peel off his marker for a clinical close-range finish.

City had their rhythm back and Sterling was the catalyst again when they took the lead in the 38th minute.

Surging into the Atalanta area at pace, Sterling was clearly tripped by Andrea Masiello and Aguero stepped up to score the penalty.

It was Aguero's 10th goal in all competitions this season, ending a three-game drought for City's record scorer.

Rodri limped off before half-time, prompting John Stones' introduction after missing six games with an injury, but not before Guardiola, pounding the dug-out seat in frustration, appeared to chastise the City defender for his slow rise from the bench.

"I think it will be 10 days but if it's broken (torn), it will be three weeks," Guardiola said of Rodri's injury.

Sterling made it three in the 58th minute as he drilled into the roof of the net.

He wasn't finished yet and raced onto Ilkay Gundogan's pass before deftly cutting back onto his right foot for a fine finish in the 64th minute.

Capping a memorable evening for Sterling, five minutes later he scored his 11th goal of the season with a close-range strike from Riyad Mahrez's cross.