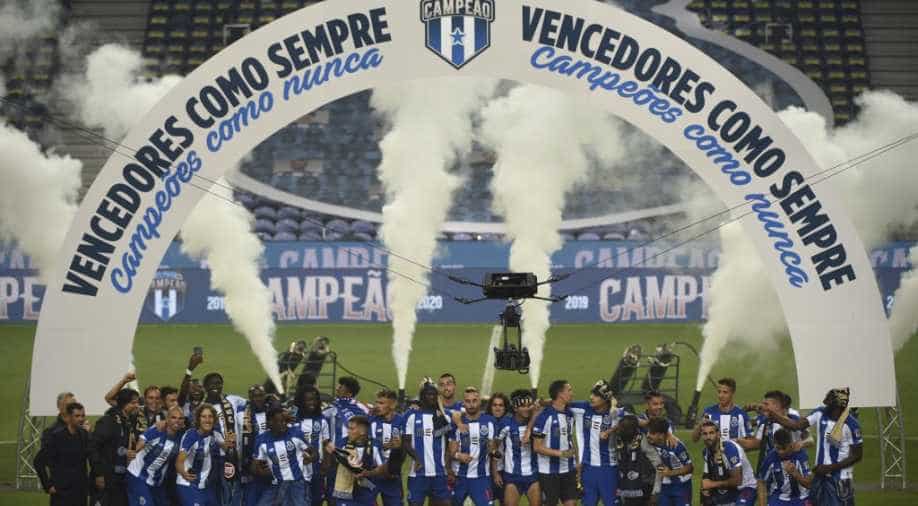 Porto clinched their 29th Portuguese Primeira Liga title on Wednesday with two games to spare after a 2-0 win over Sporting Lisbon.

Porto clinched their 29th Portuguese Primeira Liga title on Wednesday with two games to spare after a 2-0 win over Sporting Lisbon.

Sergio Conceicao's men went into the match needing only a point to secure the league due to their superior head-to-head record over second-placed Benfica.

The victory ensured they won the championship in style, moving eight points clear of last season's champions Benfica who have won a record 37 titles.

Porto only led Benfica by one point when the campaign resumed following the coronavirus lockdown last month, but their old rivals have faltered and coach Bruno Lage was replaced as coach with their title defence in tatters.

The home side got off to a nervy start at the Estadio do Dragao, as Sporting forward Andraz Sporar saw a goal ruled out by VAR for offside in the very first minute.

Midfielder Danilo Pereira scored just his second league goal this term in the 64th minute though, allowing Porto to cruise through the rest of the game.

Mali striker Moussa Marega added a second in injury-time, his 11th of the triumphant campaign.

Porto, Benfica and Sporting have won the Portuguese league title every year bar two between them since the inaugural season in 1934-35.

But Benfica had been dominant in recent years, with this only Porto's second championship since 2013 after also taking the spoils in the 2017-18 season.

Sporting, who sit a distant third this term, have not lifted the trophy since 2002.