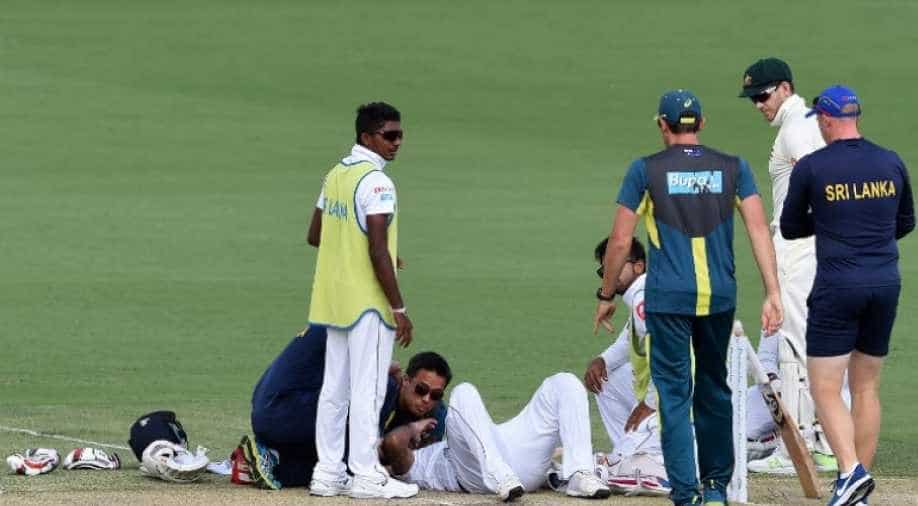 Cummins was left to look on anxiously as the Australian side assembled near the pitch to watch the medical team attend to Karunaratne, who was stretchered off the ground and taken to hospital in a neck brace.

Australia's Pat Cummins breathed a sigh of relief after hearing Dimuth Karunaratne was not in any danger after one of his vicious bouncers struck the Sri Lanka batsman on the back of the neck and left him crumpled in a heap at Manuka Oval on Saturday.

The 30-year-old opener slumped onto his back after being struck, prompting a hush to descend on the picturesque ground, which only moments before had been buzzing with horn-blowing, dancing Sri Lankan supporters.

The incident brought back painful memories of the fatal blow that struck Australian Phillip Hughes in 2014 and the concern among both sets of players was palpable.

Cummins was left to look on anxiously as the Australian side assembled near the pitch to watch the medical team attend to Karunaratne, who was stretchered off the ground and taken to hospital in a neck brace.

"It's never a nice feeling seeing someone go down like that," Cummins told the host broadcaster after the end of the day's play. "The good thing was he looked like he was moving his hands and the physio said he seemed all right when he left.

"I wish him all the best and hopefully he's doing all right. You never like seeing that. It's just one of those things that happens in cricket. Whether its your teammate, another teammate, you just hope they're OK."

Sri Lanka coach Chandika Hathurusingha later had good news about the batsman's condition, saying he had never lost consciousness and that he was in good spirits while he was being assessed at the hospital.

Kurtis Patterson, Australia's centurion from Saturday, hoped Karunaratne would be back at the batting crease on the third day of the test on Sunday.

"All of us were in a little bit of shock but I think everyone's okay which is good. Hoping he's okay to bat again tomorrow," Patterson added.

The crowd gave a standing ovation to Karunaratne, who was forced to retire hurt on 46, and continued clapping until he was driven off the field in a buggy.

The incident appeared to rattle Sri Lanka, who went from 90 without loss to 120-3.

"Not quite sure but we lost couple of wickets so definitely it was bit of a distraction at that moment," Hathurusingha told reporters. "We were going well at 90 for no wicket and they were batting well."

The tourists trail Australia by 411 runs and must win the match to draw the two-test series after the hosts won the opener at Brisbane.