'Only the start': Jurgen Klopp predicts more good times ahead for Liverpool 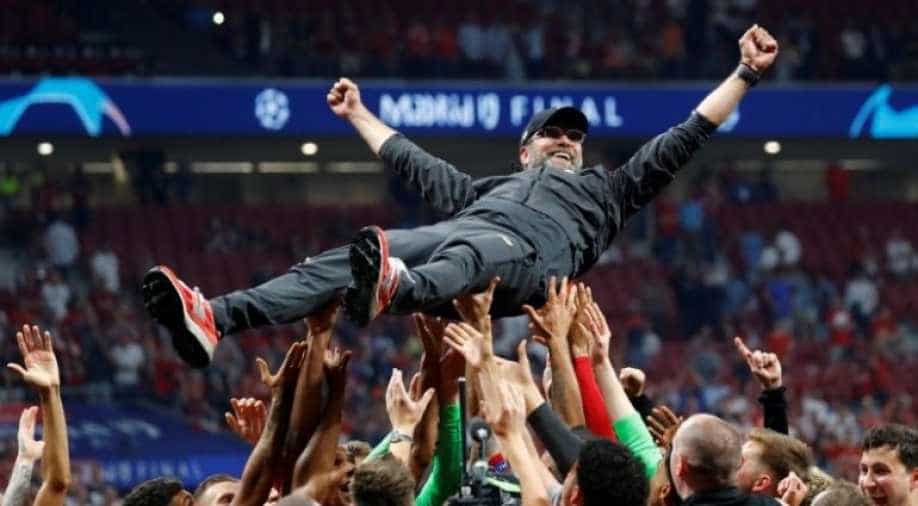 Liverpool manager Jurgen Klopp is thrown in the air by the players as they celebrate after winning the Champions League. Photograph:(Reuters)
Follow Us

A first trophy in seven years for Liverpool, and a first win in seven finals for Jurgen Klopp. The European Cup is heading back to Anfield for the sixth time and their manager is confident there is much more to come.

A beaming Klopp revealed after Saturday's 2-0 final victory over Tottenham Hotspur in Madrid that he had received a congratulatory phone call from Manchester City coach Pep Guardiola.

Three weeks ago, the Reds were denied a first league title in 30 years by City, despite losing just once and racking up 97 points, but winning the Champions League makes up for that disappointment.

"We promised each other already that we will kick our butts next year again," Klopp said of his brief exchange with Guardiola in between speaking to the world's media at the Metropolitano Stadium. "We will go for everything and we'll see if we get something."

It was a sentiment shared by centre-back Virgil van Dijk as he spoke after being named man of the match in the final.

"In July when we start again, everyone starts on nil and everyone's working towards their goals," he declared.

"Obviously we want to challenge for every trophy if possible. We have the squad for it, but you've also seen it this year, you still have to do it, and hopefully we can challenge Manchester City again next season for the title, because I don't think they will go anywhere, so we won't go anywhere either."

Liverpool had won nothing at all since defeating Cardiff City on penalties in the League Cup final in 2012. A trophy, but not on the same level as this.

After losing the Europa League final in 2016 and last year's Champions League final against Real Madrid, Liverpool seized their chance this time thanks to Mohamed Salah's early penalty and Divock Origi's late strike.

This was already a club reborn under the German's management, but such a tangible reward was needed, three and a half years on from his arrival on Merseyside.

"I'm interested really in development, but I get it, we have to win things, and so it's really important that people don't ask now all the time about not winning things," he said.

"Now we won something, and we will carry on, we want to win things, 100 per cent.

"This is only the start for this group, it's a wonderful age group, they still have the best times in their career still ahead of them, so that's big."

The former Borussia Dortmund coach has continually improved Liverpool in his time at the club, and nowhere was that more evident on Saturday than in goal.

Twelve months after two hideous errors by Loris Karius cost them dear against Real, his replacement Alisson showed just why Liverpool were prepared to pay £66.8 million (75 million euros, $84 million) to sign him from Roma as he made several key saves late in the game.

"He of course played a sensational game, he looked completely unbeatable pretty much," said Klopp.

Van Dijk was again outstanding too, so good that it was put to him that he could be a contender to win this year's Ballon d'Or.

It was not a great game and it was not a vintage Liverpool performance, but Klopp emphasised the importance of getting over the line. Now he will hope to strengthen again for next season, although they don't have long, with the new campaign starting on August 10.

Four days after that they will play Europa League winners Chelsea in the UEFA Super Cup in Istanbul, and some fans will already be dreaming of a return to the Turkish city next year when it hosts the 2020 Champions League final.

"We know that sometimes we carry the burden of history and making Istanbul happen again will be a target I would say, but it will be difficult," warned Klopp.

Liverpool's previous Champions League triumph before this came in Istanbul in 2005, when they went 3-0 down to AC Milan but came back to win on penalties.

Van Dijk added: "To be two years in a row in the Champions League final, it's something we hope to do every year, but we know ourselves how difficult it is to reach."