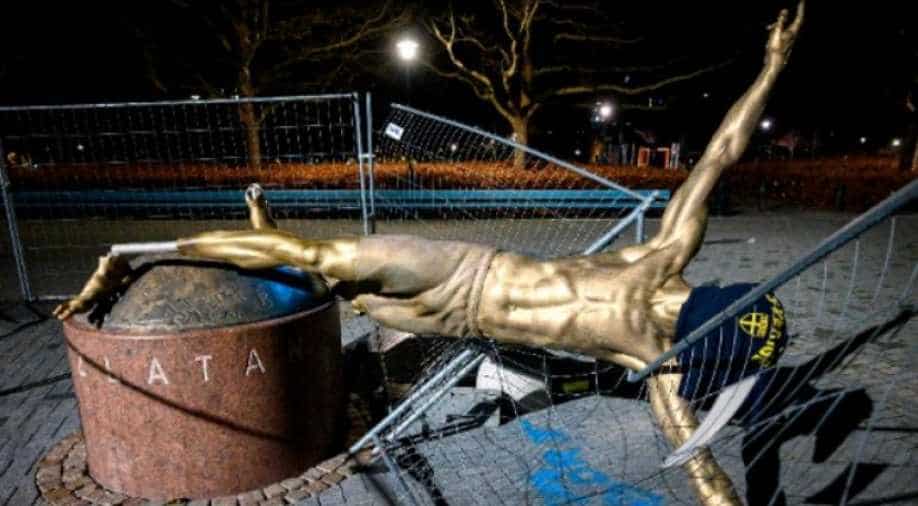 The Zlatan Ibrahimovic statue was vandalised in the star striker's hometown of Malmo, Sweden. Photograph:( Twitter )

The nose of the statue was cut off in a pre-Christmas attack but the vandalism this weekend was the most severe yet.

The statue of Zlatan Ibrahimovic erected in his home city has been attacked again and almost completely removed from its plinth outside Malmo Stadium after vandals sawed it off at the ankles.

AC Milan striker Ibrahimovic was present for the unveiling of the statue in October last year, but he subsequently angered fans in Malmo by acquiring a stake in Stockholm rivals Hammarby and saying that he was going to turn them into Scandinavia's biggest soccer club.

Ibrahimovic made his name at Malmo FF before going on to a trophy-laden career in the Netherlands, Italy, Spain, England, France and the United States.

The nose of the statue was cut off in a pre-Christmas attack but the vandalism this weekend was the most severe yet.

Only the two feet were left on the plinth and the rest of the body was left-leaning over a security fence erected to protect it, connected only by a supporting pole in the right leg.

The words "take away" in Swedish were sprayed on the ground close to the statue.

The 38-year old is expected to make his first appearance since returning to Serie A on Monday when AC Milan take on Sampdoria at the San Siro stadium.