'Hopefully, our paths cross again': Jonny Bairstow thanks franchise after being released ahead of IPL auction Sunrisers Hyderabad's star batter has thanked the franchise after he was released ahead of the IPL mega auction.

Sunrisers Hyderabad (SRH) have reportedly decided to retain only skipper Kane Williamson ahead of the Indian Premier League (IPL) mega auction for the 2022 season. While the franchise were also in talks with star spinner Rashid Khan to retain him, it remains to be seen if the Afghanistan ace will stay with SRH for the next season.

All eight existing IPL teams are set to reveal their final list of retained players on Tuesday (November 30). Ahead of making their retentions official, SRH took to Instagram to thank their players for their contributions over the years. SRH also stated that it was not a goodbye from the franchise side as they would like to buy back some of the players again during the auction.

England batter Jonny Bairstow is among the players to be released by SRH ahead of the mega auction. Bairstow himself confirmed the end of his association with the Orange Army as he reacted to SRH's farewell post for their players and wrote - “Thank you all for your support! Hopefully, at some point our paths cross again in the future,” 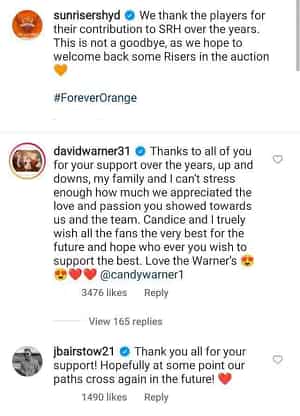 Bairstow made his IPL debut for SRH in the 2019 season and formed a formidable opening partnership at the top with David Warner, who is also set to be released by the franchsie after enduring a disappointing campaign in IPL 2020. Bairstow was one of the most consistent batters for SRH since joining the side with 1038 runs from 28 matches at an average of over 41.

He will be in demand at the upcoming IPL mega auction as a lot of franchises will be looking for good opening batters. Bairstow is a white-ball regular for England and is known for his swashbuckling style of batting. He can be a a great addition to a number of teams in the league.

SRH will be hoping to build a strong squad from scratch this time around with Williamson as full-time captain.