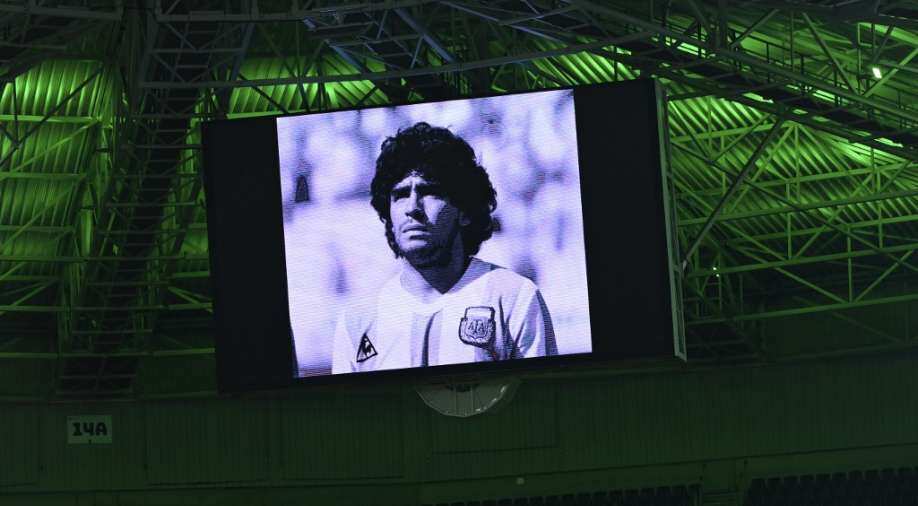 Diego Maradona, the Most Human of Immortals Photograph:( AFP )

Napoli's players honoured club legend Diego Maradona on Thursday by stepping out onto the pitch wearing his number 10 jersey before their 2-0 Europa League win over Rijeka.

Napoli's players honoured club legend Diego Maradona on Thursday by stepping out onto the pitch wearing his number 10 jersey before their 2-0 Europa League win over Rijeka.

"Diego is a legend and will never die," said Napoli coach Gennaro Gattuso.

"Since yesterday you could see that the city breathed a different atmosphere.

"We hope to dedicate something important to him and win a trophy.

"In this city we have talked about it for too many years."

Rijeka did not spoil the tribute with Napoli beating their modest rivals thanks to an own-goal from the visitor's Italian left-back Armando Anastasio before the break.

The Naples-born player took a touch to a Matteo Politano goal-bound effort, and was credited with the goal.

Hirving Lozano sealed victory with quarter of an hour to go, firing in a Lorenzo Insigne cross.

Gattuso's side ended their two-match losing streak at their home stadium to take top place in Group F with Rijeka bottom without a win in four games.

"I have many good memories," recalled Gattuso.

"I had the opportunity to talk many times with Diego, to have dinner several times with him.

"He has done so many extraordinary things. He made mistakes in his private life, but for what he did he will remain always alive.

"Diego came from another planet and he will live forever like all legends.

"I would have liked to tackle him as a player," added former Italy World Cup winner Gattuso.

Captain Insigne had earlier led the tributes alongside fans gathered outside the San Paolo Stadium before the game, Napoli's first since Maradona's death at the age of 60 on Wednesday.

All wearing black armbands, the team also wore Maradona's iconic jersey during the team presentation and minute's silence, under a photo projected on a large screen of the man who led Napoli to league titles in 1987 and 1990 and the UEFA Cup in 1989.

Throughout the day, supporters thronged in front of the San Paolo stadium, which could soon be renamed in honour of Maradona.

"I believe it is right to baptise the San Paolo with your name to still have you with us," wrote club president Aurelio de Laurentiis on the club's website.

A plaque was put up on the gates of the stadium which read "Diego Armando Maradona Stadium" and bore the face of the fans' Argentine hero.

Blue-white scarves, flowers, photos of Maradona and shirts stamped with number 10 were left in memory of the player whose seven seasons between 1984-1991 left an indelible mark on Neapolitans.

An hour before kick-off, there were still several hundred fans singing in front of the stadium.

Other Neapolitans, even more numerous, gathered in Piazza del Plebiscito in the centre of Naples.

Shortly before the match, Insigne and former Napoli storekeeper, Tommaso Starace, left the stadium to join the tributes by laying a wreath at the foot of the gates.

"Maradona means a lot, not just to me but to all Neapolitans. He has always stood up for us, he has always held us in his heart and we must do the same," said Insigne.

A few hundred fans remained outside the stadium during the game but most left before kick-off.

The Europa League match took place behind closed doors, like all matches in Italy because of the coronavirus pandemic.