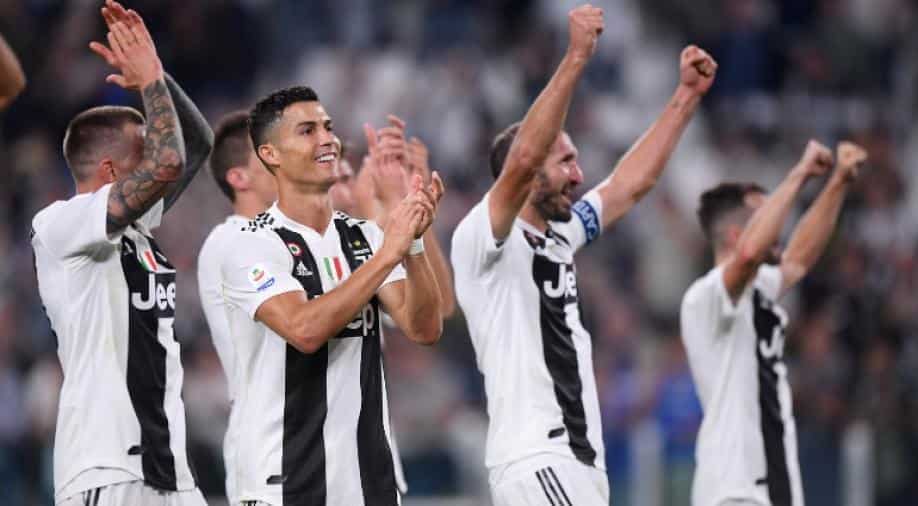 'I've known Cristiano for three months now and for over 15 years of his career he has shown to be a great professional both on and off the pitch,' said Juventus coach Massimiliano Allegri.

Cristiano Ronaldo is ready to play for Juventus against Udinese this weekend despite the rape claims made against him, coach Massimiliano Allegri said on Friday as the Italian champions try to maintain their perfect start to the Serie A season.

"Ronaldo is doing well, he is ready to play. His professionalism and his composure on and off the pitch are not in question," Allegri told a press conference on Friday.

"He is ready to return to action tomorrow."

US police said Monday they had re-opened an investigation into accusations by former American model Kathryn Mayorga that the Portuguese player raped her in a Las Vegas hotel in June 2009.

Ronaldo has strenuously denied the accusations.

"I've known Cristiano for three months now and for over 15 years of his career he has shown to be a great professional both on and off the pitch," said Allegri of the 33-year-old striker who joined the club from Real Madrid for 100 million euros ($117 million) during the summer.

🎙 @OfficialAllegri: "I've known @Cristiano for three months now and for over 15 years of his career he has shown to be a great professional both on and off the pitch. He is ready to return to action tomorrow."#UdineseJuve pic.twitter.com/tOJt6Lq7g6

"He's dedicated and he's just as dedicated to social issues, which says it all."

Juventus travel to Udine in northeastern Italy, on the border with Slovenia, to face Udinese, who are 14th in the table.

🎙 @OfficialAllegri: "Playing away at Udinese is always a battle and we'll need to approach the match with focus and determination. On a technical level, it may not be the easiest on the eye."#UdineseJuve

Ronaldo was filmed preparing for the game on Thursday, with several Juventus players later posting a photo of a team dinner in a Turin restaurant, with a smiling Ronaldo seated between Blaise Matuidi and Federico Bernardeschi.

"It is normal that we help him during a delicate time, but he has broad enough shoulders to focus on tomorrow's game, go down onto the pitch and play well," said Allegri.

Amid the storm of sponsors' concerns, and the team's share price taking a hit, Juventus are trying to focus on their quest for an eighth straight league title.

They have a maximum 21 points from seven games, six points ahead of Carlo Ancelotti's Napoli, who they beat 3-1 in Turin last weekend with Ronaldo setting up all three goals.

"Tomorrow I could go with a front three of Mario Mandzukic, Paulo Dybala and Cristiano Ronaldo, or alternatively one of them could be rested," said Allegri.

The Turin giants have also won both their Champions League games including last Tuesday's match against Swiss side Young Boys, with Ronaldo watching from the stands as he was suspended for a red card against Valencia.

"Tomorrow is a match that will ask a lot of the players both physically and mentally, so we must be prepared for that," Allegri said.

"(Udinese) have lost the last two matches, so we must not be complacent but make sure that we're on top of our game in order to enter the international break on a high."

Behind Juventus the battle for European places is very tight with Napoli, who are six points behind the champions in second. Just three points separate the third to eighth-placed teams.

Napoli, Roma and Inter Milan also all won their Champions League games during the week.

Napoli bounced back from their defeat in Turin with a last-gasp Lorenzo Insigne goal snatching a 1-0 win over Liverpool.

"It's an important victory because it shows our progression, notably on a psychological level," said Ancelotti ahead of Sunday's game at home against Sassuolo, joint third with 13 points.

Eusebio Di Francesco's side slumped to ninth after a four-game winless streak, and a win over lowly Empoli would propel them further up the table.

Fiorentina, third with 13 points, face a stiff test at Lazio, in seventh.

Simone Inzaghi's side were stung by last week's derby defeat to Roma followed by a heavy 4-1 Europa League defeat at Eintracht Frankfurt.