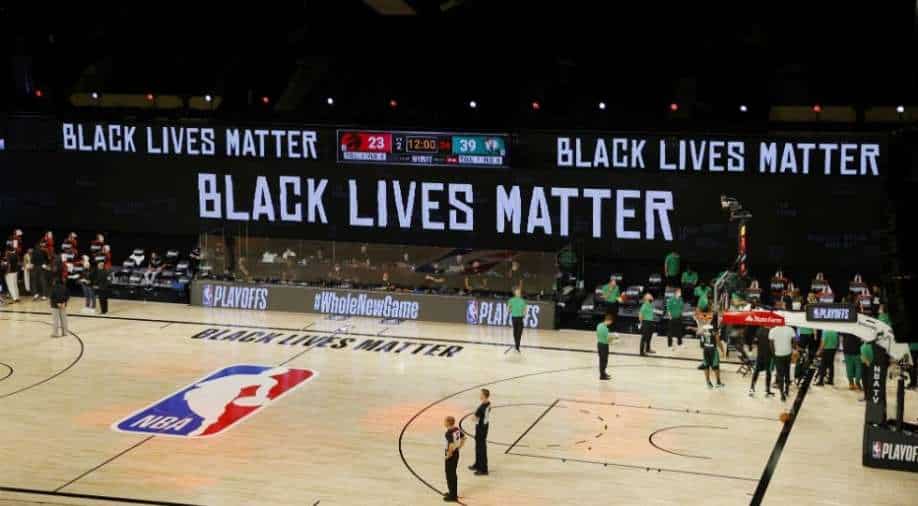 As violence at the US Capitol underlined deep divisions in America on Wednesday, NBA players said the incident helped renew their commitment to fight racial injustice.

As violence at the US Capitol underlined deep divisions in America on Wednesday, NBA players said the incident helped renew their commitment to fight racial injustice.

Boston Celtics and Miami Heat players knelt during the national anthem before their game in Miami on Wednesday, hours after supporters of President Donald Trump stormed the Capitol as legislators met to certify Joe Biden's victory in the November election.

The players issued a joint statement referring not only to the chaotic events in Washington but also to the decision on Tuesday by prosecutors in Wisconsin not to charge the white police officer who shot and paralyzed Black man Jacob Blake in Kenosha last August.

Protests of Blake's shooting brought the NBA to a standstill for three days in August in a protest of racial injustice that soon spread across an array of sports.

"2021 is a new year, but some things have not changed," the Celtics and Heat players said in their statement.

"We play tonight's game with a heavy heart after yesterday's decision in Kenosha and knowing that protesters in our nation's capital are treated differently by political leaders depending on what side of certain issues they are on.

"The drastic difference between the way protesters this past spring and summer were treated and the encouragement given to today's protesters who acted illegally just shows how much more work we have to do.

"We have decided to play tonight's game to try to bring joy into people's lives.

"But we must not forget the injustices in our society, and we will continue to use our voices and our platform to highlight these issues and do everything we can to work for a more equal and just America."

In Philadelphia, 76ers coach Doc Rivers was blunt in his assessment of the scene at the Capitol.

"It's pretty disturbing and sad," he said. "I keep hearing, 'This is an attack on democracy.' It's not. Democracy will prevail. It always does.

"It shows a lot though. I'll say it because I don't think a lot of people want to -- could you imagine today if those were all Black people storming into the Capitol and what would've happened?

In Milwaukee, the host Bucks and the Detroit Pistons both took turnovers on their first possessions.

The Bucks won the opening tip off and NBA Most Valuable Player Giannis Antetokounmpo simply held the ball as all the players took a knee. On the ensuing Detroit possession, Pistons star Blake Griffin held the ball and all 10 players on court took a knee again.

Golden State Warriors coach Steve Kerr admitted that it was hard to concentrate on basketball.

"I started the day thinking about how we were going to guard Lou Williams without fouling him," Kerr said. "Suddenly that didn't seem quite as important.

"Just a bizarre scene, but a pretty clear reminder that the truth matters," Kerr said.

"A legitimate election is suddenly questioned by millions of people, including many of the people who are leading our country in government, because we've decided to -- over the last few years -- allow lies to be told. So, this is who we are," Kerr said. "You reap what you sow."