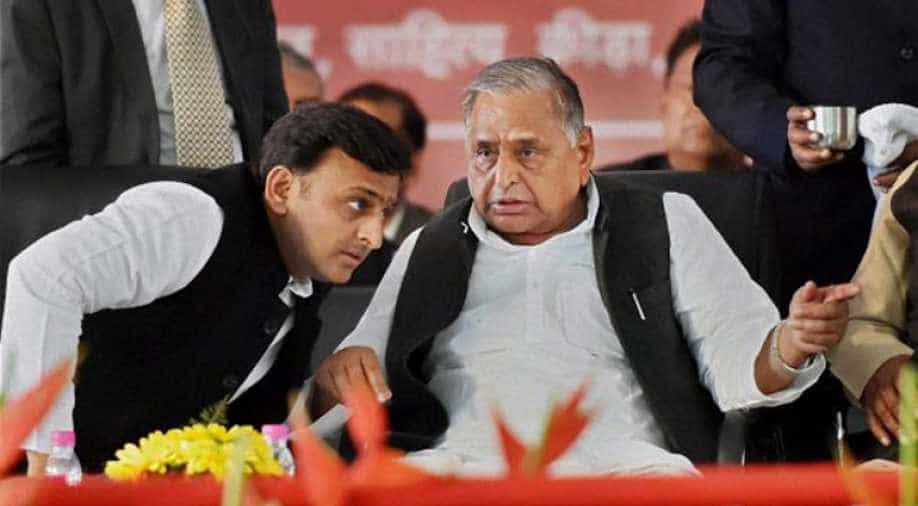 Chief minister of India's largest state Uttar Pradesh, Akhilesh Yadav, and his uncle Ramgopal Yadav have been taken back in the Samajwadi Party, a day after they were expelled.

SP state unit chief Shivapal Yadav wrote on Twitter that SP general secretary Mulayam Singh Yadav, called 'Netaji' by his followers, revoked the suspension with immediate effect and that the previously warring factions would fight the upcoming state elections together.

"We are united," said Shivpal Yadav, who is the brother of Mulayam Singh Yadav.

He also tweeted that Mulayam and his son Akhilesh would jointly prepare the list of election candidates.

Ram Gopal cancelled his National executive prog and Mulayam Singh and Akhilesh Yadav will sit together to make a list: Shivpal Yadav pic.twitter.com/TZlLHFlnFi

He also said the SP would "fight unitedly against communal forces" in the elections.

The decision was taken soon after Akhilesh met his father at the senior Yadav's 5 Vikramaditya Marg residence in the state capital Lucknow.

Earlier in the day, Mulayam called a meeting of all 393 candidates announced by him to contest next assembly election. Akhilesh, too, convened a meeting of MLAs as a showdown against his father to establish that the majority of Samajwadi Party MLAs are with him, ANI reported. But Akhilesh left his meeting midway to meet his father Mulayam Singh with party leader Azam Khan and Abu Azmi.

Rashtriya Janata Dal (RJD) chief Lalu Prasad also tried to bring the warring groups together by speaking to Mulayam Singh to broker peace, PTI reported. Lalu reportedly called up Mulayam, who happens to be his relative too, to ensure that the feuding leaders buried the hatchet.

The surprise move came after Akhilesh "circulated" his own list of 235 candidates for the upcoming state elections parallel to the party's official list of 393 nominees. A day prior to that, Mulayam Singh had released a list of election candidate without consulting Akhilesh, and refused to name his son as the chief ministerial candidate. Mulayam had also excluded people who were believed to be close to Akhilesh.

The timing of the announcement had underscored the fault lines in the family-led party, prompting  "pari-war" memes that play on the Hindi word for family. The SP candidates' list was announced when Akhilesh was away in Bundelkhand in southern UP.

WION's Kartikeya Sharma, who is tracking all the developments in Lucknow, said: "The sudden split and the merger will be sending a mixed signal to the electorate, especially since it is weeks away from the elections.

UP poll results become crucial for the Indian polity because of the ramifications it holds for the ruling party in power at the national level. India's party in power in New Delhi -- Bharatiya Janata Party -- is focused on improving its tally of MPs (Members of Parliament) in the state as that will improve its numbers in Rajya Sabha, or the Upper House of Parliament, and facilitate the smooth clearance of legislation.