Thousands of troops deployed in Bangladesh ahead of general elections 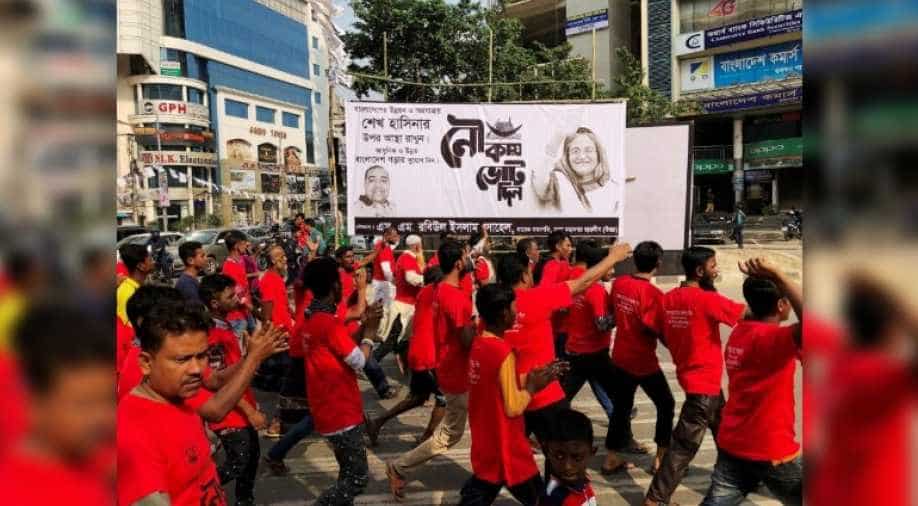 Supporters of the ruling party Bangladesh Awami League join in a campaign ahead of the 11th general election in Dhaka, Bangladesh. (File photo) Photograph:( Reuters )

Election Commission's Joint Secretary said that about 400-450 platoons of the armed forces are deployed in 389 areas in 270 constituencies across the country.

Thousands of army troops were deployed across Bangladesh on Monday to provide security and help conduct parliamentary elections on December 30, amid concerns that violence could happen.

The Election Commission on December 13 announced that the army will be deployed as a striking force across the country during the 11th parliamentary elections and it will remain in the field until January 2.

Election Commission's Joint Secretary Farhad Ahmed Khan said that about 400-450 platoons of the armed forces are deployed in 389 areas in 270 constituencies across the country.

The army will work in 389 designated areas and the navy in 18. It will also be in charge of operating the electronic voting machines (EMVs) to be used at 845 voting centres in six constituencies, the Dhaka Tribune reported.

Election Commissioner Rafiqul Islam said the forces have been deployed to remove the fear of all including the political parties.

The opposition parties have alleged that thousands of its leaders and activists have been arrested to weaken them.

The BNP has welcomed the Election Commission's decision to deploy army in the country ahead of the elections.

"We welcome the decision to deploy army during the 11th Jatiya Sangsad polls. We sincerely believe that the deployment of the army will help create a fair and neutral environment for the election which so far has not been in effect, BNP Secretary General Mirza Fakhrul Islam said in a press statement on Sunday.

Stating that Bangladesh Army has always been dedicated to serving the nation and its people, Fakhrul said the army won't let its image be tarnished by working in a partisan way.

We hope every proud member of the Bangladesh Army would work for the sake of the countrymen in an effective way, and not in favour of any individual or any particular group, he said.

We strongly urge the Bangladesh Army to ensure equal scopes for all political parties and candidates in the election, Fakhrul added.

Prime Minister Sheikh Hasina is seeking to return to power for a third consecutive time in the December 30 elections, which the opposition has alleged could be rigged.

Zia, 73, who is serving a 10-year jail sentence on corruption charges, has been barred from contesting the polls.

The Election Commission on Sunday allowed Jamaat-e-Islami, a crucial ally of BNP, to contest the general elections, two months after it scraped the fundamentalist party's registration.

The EC's decision came after the High Court earlier this week directed it to swiftly decide on a plea of 25 leaders of the unregistered party to contest the election as independent candidates on behalf of their alliance partners.

The hardline Islamist party is now in a dilapidated state with most of its senior leaders executed in the past five years after being convicted by special tribunals on 1971 war crimes charges.

Jamaat was opposed to Bangladesh's 1971 independence from West Pakistan and its leaders and workers sided with Pakistani troops in carrying out atrocities and genocide in then East Pakistan (now Bangladesh).

Bangladesh's post-independence government banned Jamaat but the subsequent regimes withdrew the ban allowing the party to re-emerge in politics.