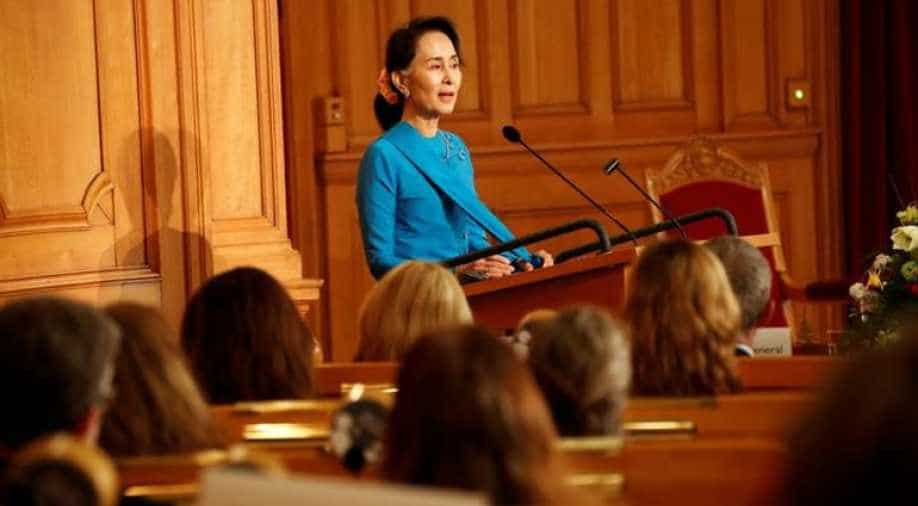 The UN in Bangladesh estimates the number of refugees from Myanmar since August 25 could have reached 300,000. Photograph:( Reuters )

The fact-finding mission to Myanmar, set up by the UN Human Rights Council, said they were not equipped to determine what level of responsibility Suu Kyi should shoulder for the Rohingya crisis.

UN investigators called Tuesday for an expert evaluation of whether Myanmar's civilian leader Aung San Suu Kyi can be legally implicated in the abuses committed against the country's Rohingya minority.

The fact-finding mission to Myanmar, set up by the UN Human Rights Council, said they were not equipped to determine what level of responsibility Suu Kyi should shoulder for the Rohingya crisis.

"It will become a legal issue whether or not there is an element of culpability here," fact-finding mission chair Marzuki Darusman told reporters in Geneva.

The Human Rights Council recently created a panel to prepare criminal indictments over atrocities committed in the country -- the so-called Independent International Mechanism for Myanmar (IIMM) -- which could have the expertise to determine what responsibility Suu Kyi bears in the crisis.

"It is still an open-ended question to what extent she might be implicated," Darusman said.

When asked if the Nobel laureate might be implicated, he said "that is for the judicial process to address," referring to the IIMM.

The fact-finding mission last year branded the army operation in August 2017 as "genocide" and called for the prosecution of top generals, including army chief Min Aung Hlaing.

Some 740,000 Rohingya fled burning villages, bringing accounts of murder, rape and torture over the border to sprawling refugee camps in Bangladesh, where survivors of previous waves of persecution already languished.

And in a damning report published Monday, the investigators warned that the 600,000 Rohingya still inside Myanmar's Rakhine state remain in deteriorating and "deplorable" conditions and continue to face a "serious risk of genocide".

The experts told the rights council on Tuesday that they had a confidential list of some 150 names, including officials, suspected of being involved in genocide, crimes against humanity and war crimes.

Darusman said that the investigators initially shied away from laying blame on Suu Kyi, who spent years in house arrest before her party in 2015 won Myanmar's first fully free vote for generations.

He said that the fact-finding team had taken into account that Myanmar was "going through a transition, a democratic transition, and therefore in our first report we absolved Mrs. Aung San Suu Kyi from any direct responsibility."

But while it was likely that Suu Kyi was not aware in August 2017 of the army's activities, "the issue now is that subsequently, there was no further addressing of this issue on her part," Darusman said.

But "the civilian side of the government has very substantial constitutional responsibilities," he said.

"The longer this goes on, the more impossible it is for the civilian side of the government to escape international criminal responsibility for the human rights situation in Myanmar."

The fact-finding mission, which was never granted access to Myanmar, is expected to wrap up its work during the ongoing session of the Human Rights Council, due to end next week.

But the UN Special Rapporteur on the rights situation in Myanmar, Yanghee Lee, should continue monitoring the situation.