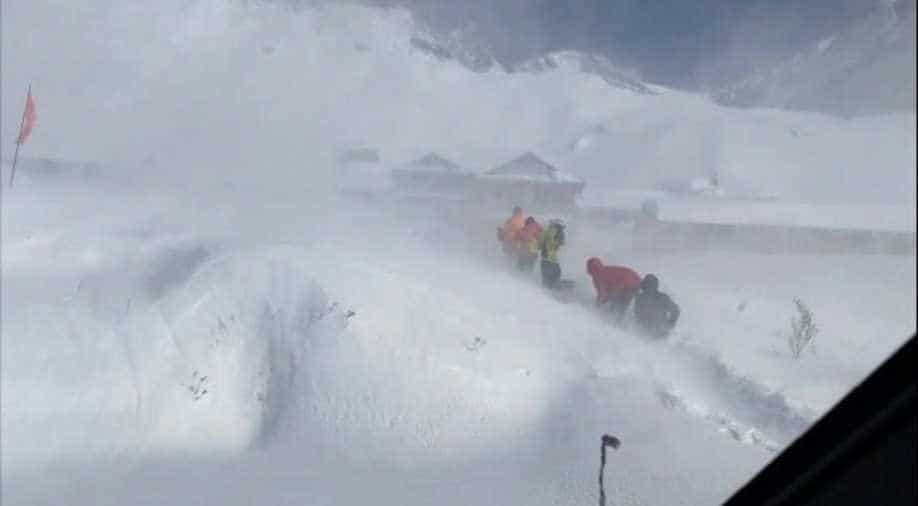 Issuing a press release, the Ministry of Culture, Tourism and Civil Aviation on Thursday said that the operation was suspended due to weather conditions in the area and other safety concerns.

The week-long search operation for the four South Korean trekkers and their three Nepali associates, who went missing from the Annapurna region, has been suspended by the government.

Issuing a press release, the Ministry of Culture, Tourism and Civil Aviation on Thursday said that the operation was suspended due to weather conditions in the area and other safety concerns.

Long-line rescuers Dawa Finju Lama Bhote and Pimba Tenjing Lama Back from Annapurna Trekking Circuit had suggested that operations should be halted.

"In my opinion, it would be an exception if they are found alive. It has already been so long, I see lesser chances for them to be alive, on the basis of my experience. Probably they have been have been buried inside," Tenjing told ANI.

Nepal Army's High Altitude Rescue Force had been deployed on the site since Tuesday and had started digging snow in search of the seven missing trekkers.

Various governmental bodies along with the South Korean Embassy in Nepal and Korean Telecommunication Team have been continuing their efforts to locate the missing people since past one week.

"There is nothing we can do immediately for now. The amount of debris is quite high. We tried searching for the missing people who are suspected to be washed by an avalanche. Our recco-detector is not able to work properly because the snow debris is quite high. If the weather is sunny, then we can resume the search operation. But this looks very slim," Dawa Finju Lama Bhote, another long-line Nepali rescuer said after briefing officials of Nepal Mountaineering Association.

As per experts who were in the Annapurna region for two days, the length of the avalanche area is estimated to be 250 metres and its width is between 50 to 80 metres.

"We have told them that the current circumstances are not favourable to search them. Nepal Army owns the authority for it and we suggested them to consult with their own team about it," Bhote said.

The seven missing people have been missing since Friday morning after an avalanche hit a section of famous Annapurna Trekking Circuit, commonly known as ABC.

Annapurna, the tenth highest mountain in the world attracts a large number of tourists all over the globe.

The avalanche hit area falling between Deurali and Macchapuchre Base Camp lies between 3,200 - 3,700 metres above sea level.