Culture or cruelty? Camel fighting persists in Pakistan despite ban 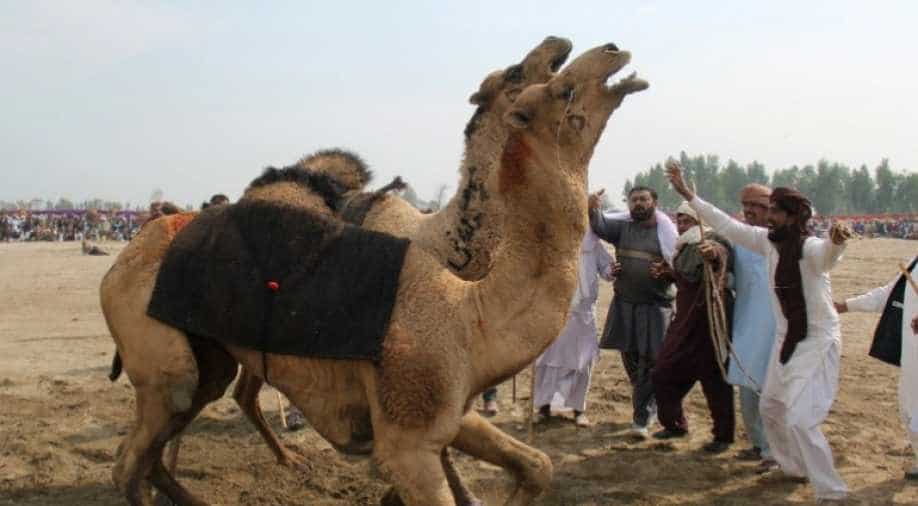 Owners celebrate after a traditional camel fight at an annual festival in Rajin Shah in Layyah District. Photograph:( AFP )

The crowd scream to the din of dhol drums and inch closer to the animals as anticipation mounts ahead of the bout, which is part of a festival in the central city of Layyah.

Thousands cheer as a caravan of camels outfitted in decoratives saddles and garlands lumber across a dusty pitch to fight -- a sport that is officially banned in Pakistan but remains popular.

The crowd scream to the din of dhol drums and inch closer to the animals as anticipation mounts ahead of the bout, which is part of a festival in the central city of Layyah.

Before the fight begins, the camels are stripped of their festive pom poms and bells.

Then the games begin.

Animals wrestle with their necks and bite as they attempt to pin their adversary to the ground. There are howls of pain and grunts.

"It is a cultural fair and people came here to see it with passion and zeal," spectator Atiq ur Rehman told AFP.

"You can see the excitement around here.

Eventually, the referee declares a winner, prompting fans to surge forward to encircle the victorious animal.

Camel fighting is illegal in Pakistan but the event at the Layyah festival still draws a significant crowd.

The country has a long history of bloodsports -- with bears, cocks, and dogs, among the other creatures forced to fight.

"According to the Pakistani law, all animal fights are illegal," said lawyer Abdul Ahad Shah of the Animal Welfare Organisation.

He added that most camels injured in the fights are not given proper medical care.

Enthusiasts brush away the criticism, saying the fights are a tradition in the country's Punjab heartland.

The animals are usually trained for more than a year before they take part in any fights.

"It shows our culture," said local elder Muhammad Ali Jatoi. "People gather here, greet each other and forget the anxieties of life."

Pakistan does little to enforce its bans on any kind of animal fighting, though there are sporadic crackdowns.

Last year it passed an amendment to its Prevention of Cruelty to Animals Bill which suggested the fine for inciting animals to fight should be increased from 50 rupees to 300,000 rupees.

The original law was set by the British in 1890 and had not been amended.

The Koran also instructs Muslims to avoid animal fighting as a sport.

Camel wrestling is also common in Afghanistan and the Middle East. The practice dates back thousands of years.

In Turkey, which hosts the hugely popular Selcuk Camel Wrestling Festival, local media reported attempts by local politicians for the activity to be listed on the UNESCO Intangible World Heritage List.