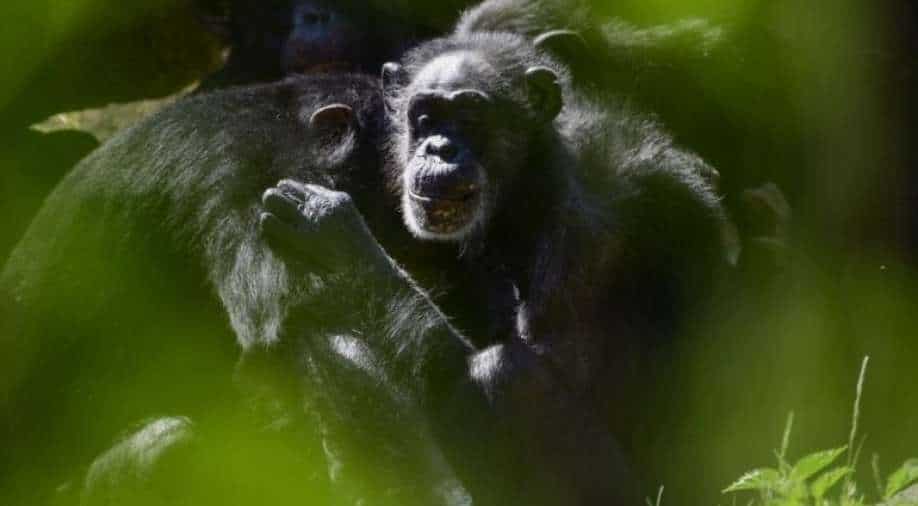 The chimps appeared to have learned to perform the grasps "to some extent" as a ritual, reminiscent of secret handshakes performed by humans

Chimpanzees develop specific handshake-like gestures depending on their social group, according to the results of a 12-year observational study published on Wednesday that sheds light on the animals' complex social structures.

Chimps are often referred to as being the most "humanlike" non-human species, given their propensity to perform complicated tasks, such as tool use, which were long thought to be the sole preserve of mankind.

Edwin van Leeuwen, an expert in animal behaviour at the University of Antwerp and the city's Royal Zoological Society, studied dozens of chimpanzees sheltered at Zambia's Chimfunshi Wildlife Orphanage Trust over a 12-year span.

Despite a large turnover in the chimp population due to deaths and births, Van Leeuwen was able to observe specific and repeated hand gestures among chimps in two distinct groups.

The gesture, known as the grooming handclasp, involves "each of the participants simultaneously (extending) an arm overhead and the other (clasping) the other's wrist or hand or both clasping each other's hand," according to the results of his study, published in the journal Royal Society Biology Letters.

Through years of observation, Van Leeuwen found that palm-to-palm grasping was "substantially more pronounced" in one group, or society, of chimps than the other.

Also read | Dogs can detect COVID-19 among humans in less than a second, UK study finds

He also found that female chimps were far more likely than males to grasp palms, while males were more likely to grasp wrists, likely due to males' desires to assert or affirm dominance.

"The fact that they have developed different styles in different groups reflects that they learn the style socially within their groups," Van Leeuwen told AFP.

He said the chimps appeared to have learned to perform the grasps "to some extent" as a ritual, reminiscent of secret handshakes performed by humans.

"The handclasp fits into the whole social interaction that two individuals engage in sometimes, making it a special connection within an already intimate grooming bout."

'Some serious, some care-free'

Van Leeuwen said his study was evidence of chimps' ability to preserve "the stability of traditions", a behaviour that among humans is thought of as cultural persistence.

He said the behaviour could not be explained by genetic or environmental factors since the composition of the two separate chimp groups was essentially identical -- yet they each developed distinct grasping techniques.

He said the specific gestures and their longevity within each group could be a result of "the shared trait of social learning".

With more than a decade spent observing the chimps' behaviour, Van Leeuwen said he got to know the personality traits of each individual animal.

"Like humans, they have their individual ways of doing -- be it during play, eating or grooming," he said.

"Some chimpanzees are very serious, always on the look-out for ripples in the social atmosphere," added Van Leeuwen.

"Some are more care-free and interact with even high-ranking individuals in their group with light touches of play."

What is GPT in ChatGPT? Can this AI tool actually replace humans in the workforce?

Millions at risk due to flooding from melting mountain glaciers: Report