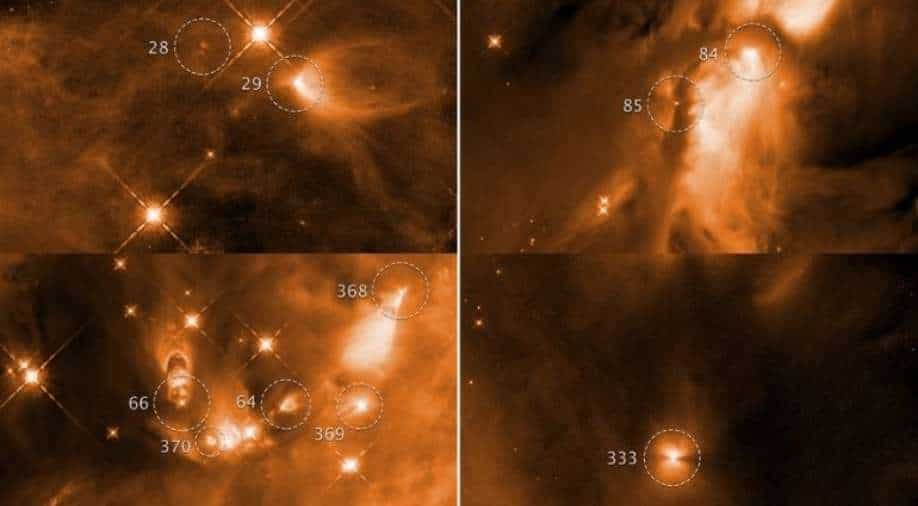 These four images taken by Hubble Space Telescope reveal the chaotic birth of stars in the Orion complex, the nearest major star-forming region to Earth (Image:NASA) Photograph:( Others )

The unexpected discovery made in the study, which will appear in an upcoming issue of The Astrophysical Journal, may change our understanding of star formation

NASA's Hubble Space Telescope has detected that torrential outflows from infant stars may not stop them from growing.

The unexpected discovery made in the study, which will appear in an upcoming issue of The Astrophysical Journal, may change our understanding of star formation.

It has been assumed that a newly forming star blows off a lot of hot gas through lightsaber-shaped outflowing jets and hurricane-like winds launched from the encircling disk by powerful magnetic fields. These fireworks should squelch further growth of the central star. But a new, comprehensive Hubble survey shows that this most common explanation doesn't seem to work, leaving astronomers puzzled.

In this largest-ever survey of nascent stars to date, researchers are finding that gas-clearing by a star's outflow may not be as important in determining its final mass as conventional theories suggest. The researchers' goal was to determine whether stellar outflows halt the infall of gas onto a star and stop it from growing.

Instead, they found that the cavities in the surrounding gas cloud sculpted by a forming star's outflow did not grow regularly as they matured, as theories propose.

"In one stellar formation model, if you start out with a small cavity, as the protostar rapidly becomes more evolved, its outflow creates an ever-larger cavity until the surrounding gas is eventually blown away, leaving an isolated star," explained lead researcher Nolan Habel of the University of Toledo in Ohio.

"Our observations indicate there is no progressive growth that we can find, so the cavities are not growing until they push out all of the mass in the cloud. So, there must be some other process going on that gets rid of the gas that doesn't end up in the star."

A Star is Born

During a star's relatively brief birthing stage, lasting only about 500,000 years, the star quickly bulks up on mass. What gets messy is that, as the star grows, it launches a wind, as well as a pair of spinning, lawn-sprinkler-style jets shooting off in opposite directions. These outflows begin to eat away at the surrounding cloud, creating cavities in the gas.

Popular theories predict that as the young star evolves and the outflows continue, the cavities grow wider until the entire gas cloud around the star is completely pushed away. With its gas tank empty, the star stops accreting mass – in other words, it stops growing.

To look for cavity growth, the researchers first sorted the protostars by age by analyzing Herschel and Spitzer data of each star's light output. The protostars in the Hubble observations were also observed as part of the Herschel telescope's Herschel Orion Protostar Survey.

Then the astronomers observed the cavities in near-infrared light with Hubble's Near-infrared Camera and Multi-object Spectrometer and Wide Field Camera 3. The observations were taken between 2008 and 2017. Although the stars themselves are shrouded in dust, they emit powerful radiation which strikes the cavity walls and scatters off dust grains, illuminating the gaps in the gaseous envelopes in infrared light.

The Hubble images reveal the details of the cavities produced by protostars at various stages of evolution. Habel's team used the images to measure the structures' shapes and estimate the volumes of gas cleared out to form the cavities. From this analysis, they could estimate the amount of mass that had been cleared out by the stars' outbursts.

"We find that at the end of the protostellar phase, where most of the gas has fallen from the surrounding cloud onto the star, a number of young stars still have fairly narrow cavities," said team member Tom Megeath of the University of Toledo. "So, this picture that is still commonly held of what determines the mass of a star and what halts the infall of gas is that this growing outflow cavity scoops up all of the gas. This has been pretty fundamental to our idea of how star formation proceeds, but it just doesn't seem to fit the data here."

Future telescopes such as NASA's upcoming James Webb Space Telescope will probe deeper into a protostar's formation process. Webb spectroscopic observations will observe the inner regions of disks surrounding protostars in infrared light, looking for jets in the youngest sources. Webb also will help astronomers measure the accretion rate of material from the disk onto the star, and study how the inner disk is interacting with the outflow.