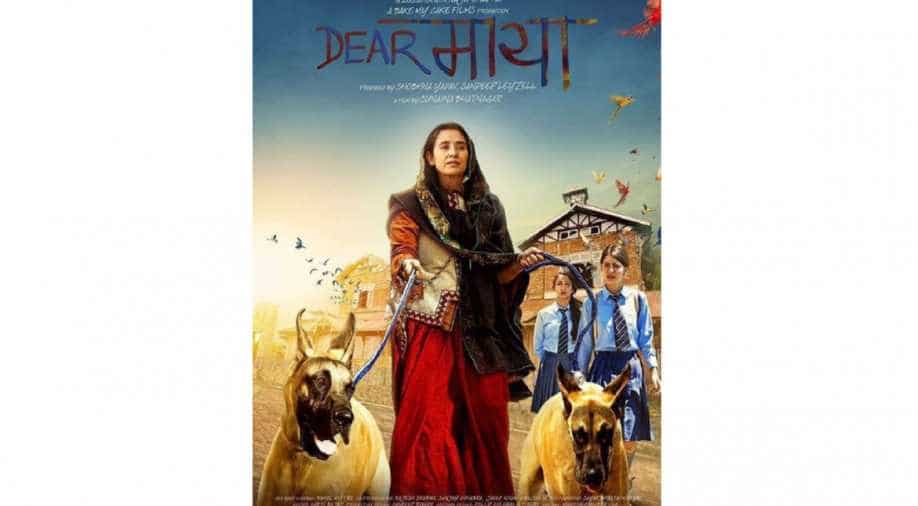 Manisha Koirala was one of the most popular heroines of Bollywood in the ’90s, before a short-lived marriage and a brave fight against cancer made her take multiple breaks from films. She is back as one of the lead stars in Dear Maya that also has two newcomers in the lead. Directed by Sunaina Bhatnagar, Dear Maya is a moving drama about finding love at unexpected times, and of friendship.

In a quaint town of Shimla, Maya (Manisha Koirala), a 40-year-something spinster leads a desolate existence inside her derelict mansion, in the company of her birds and two dogs. She never steps out of her courtyard, and spends time making depressing dolls. Her intriguing lifestyle catches the eye of her 16-year-old neighbour, Ana (Madiha Imam), and her mischievous bestie, Ira (Shreya Chaudhary). When they learn that Maya has never experienced the love of a man, thanks to the trauma she suffered in the past, Ira convinces Ana to spice her life up by writing love letters in the name of some random admirer from Maya’s past.

Reluctant at first, Ana finally caves in and starts writing beautiful letters to Maya. She feels more encouraged when Maya begins to respond to them positively and starts coming out of her shell. However, due to Ira’s mistake, one of Maya’s letters accidentally features an address from Delhi, making her sell everything and leave for the capital to be with her ‘lover.’ Guilt-stricken over this, Ana confesses to her parents, who pack her off to boarding school and she also breaks off her friendship with Ira in the process. Six years later, they, however, reunite to search for Maya, who could or could not be dead by then.

Dear Maya is a kind of genre we don’t pretty much see in Bollywood these days – a moving human drama that doesn’t involve huge twists or shockers, but invests itself in human relationships and dynamics, without resorting to a an item number song to spice things up. The premise is not new – it actually reminded me of the Malayalam movie, Pavam Pavam Rajakumaran, which was about how a college professor was duped by his colleagues through fake letters from a girl.

However, Dear Maya has to be appreciated for the fact that it doesn’t stray too much from its subject, and only has a handful of characters for us to invest in. There are several interesting moments in the movie, especially when it shows Maya rediscovering life through the letters, and later through the city.

In her comeback role, Manisha Koirala gives a nuanced performance that will win your heart. Though she lends an air of mysticism to the initial portions of the movie, it’s when she rediscovers life is where Manisha shines the best. Too bad that the movie invests too little in her. Despite the raw edges, both the newcomers, Madiha and Shreya, are convincing in their roles. Iravati Harshe, as Ana’s mother, is superb as always.

There’s a surprising cameo towards the climax, which we are not ruining for spoiler purposes.

More than this being Maya’s story, Dear Maya is actually about the two girls re-evaluating their friendship through the repercussions of their prank on an unsuspecting victim. Not a bad idea, per se. But the problem is we don’t feel much for their friendship thanks to some very okayish writing in these portions. So those moments, when they fight and later reconcile, do not touch us with the same effect as Maya enjoying a sweet dish after many years.

One of the characters is even given a forced sob story, just so to get her more sympathy points. Though the scene where she takes in the atmosphere of a nightclub in Delhi for the first time is well-depicted. Some of their actions also don’t make any sense. Like Ana is shown frantically searching for Maya for six years; she calls up radio stations and pastes posters of Maya’s everywhere. But at no point, does she even think of visiting a police station, until someone reminds her of doing so. The pace of the narrative is cumbersome and yawn-inducing, and will put you off the movie at several junctures.

Dear Maya may have an interesting story to tell, but it is a slow watch and is not everyone’s cup of tea. Manisha Koirala delivers a fine performance in her comeback role, but we do wish the movie had invested in giving her more screentime.