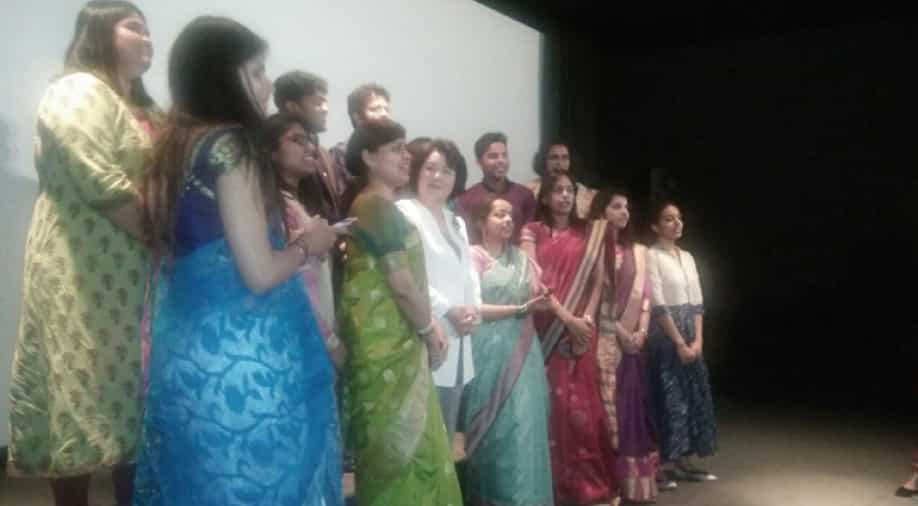 File photo: Kim Jung-sook is the First Lady of the Republic of Korea and spouse of Moon Jae-in, the 12th President of South Korea. Photograph:( Zee News Network )

Kim is visiting India at the invitation of Prime Minister Modi and she will be the chief guest at the 'Deepotsav' event being organised by the Uttar Pradesh government and the ground-breaking ceremony of the new memorial of queen Suriratna (Heo Hwang-ok) in Ayodhya on Tuesday.

In their meeting on Monday, Modi and Kim discussed the deep civilisational and spiritual links between India and Korea, and exchanged views on promoting people-to-people exchanges, a statement from the Prime Minister's Office said.

She also congratulated the prime minister on being awarded the Seoul Peace Prize.

The prime minister said this honour truly belongs to the people of India.

Earlier in the day, External Affairs Minister Sushma Swaraj had called on Kim.

The Korean first lady also interacted with school students here on Monday, the first of her official engagements during her India visit.

"Affectionate bonding. EAM @SushmaSwaraj calls on the First Lady of the Republic of Korea, Mrs Kim Jung-sook. India and ROK (Republic of Korea) share a special strategic partnership since 2015 and our relations have deepened and diversified in recent years," Ministry of External Affairs Spokesperson Raveesh Kumar tweeted.

After her meeting with Swaraj, the first lady visited the ASN Senior Secondary school in East Delhi where she interacted with students.

The school has a tie-up with South Korea's Jeonnam (Chonnam) Foreign Language High School since 2015 and the institutes have an exchange programme for their students and teachers.

Addressing a group of students, Kim urged them to study hard and help in the growth of their nations.

The future generation will help in further cementing the Indo-Korean ties, she said.

With the political leadership in India and Korea working to strengthen ties, the students will get more opportunities to visit each others countries, she said.

The Korean first lady will visit Lucknow and from there, on Tuesday, she will leave for Ayodhya where she will attend the ground-breaking ceremony of the Queen Suriratna memorial.

"The First Lady's participation in the festivities in Ayodhya will showcase our close civilisational links as well as the ongoing deepening engagement between our two countries," the MEA had said last week.

According to Korean legends, Princess Suriratna from Ayodhya had travelled to Korea and married King Kim Suro and became Queen Heo Hwang-ok some 2000 years ago.

The South Korean First Lady will also attend the 'Deepotsav' event in the evening on Tuesday.

Kim will leave for Agra on Wednesday for a visit to the Taj Mahal before heading home.