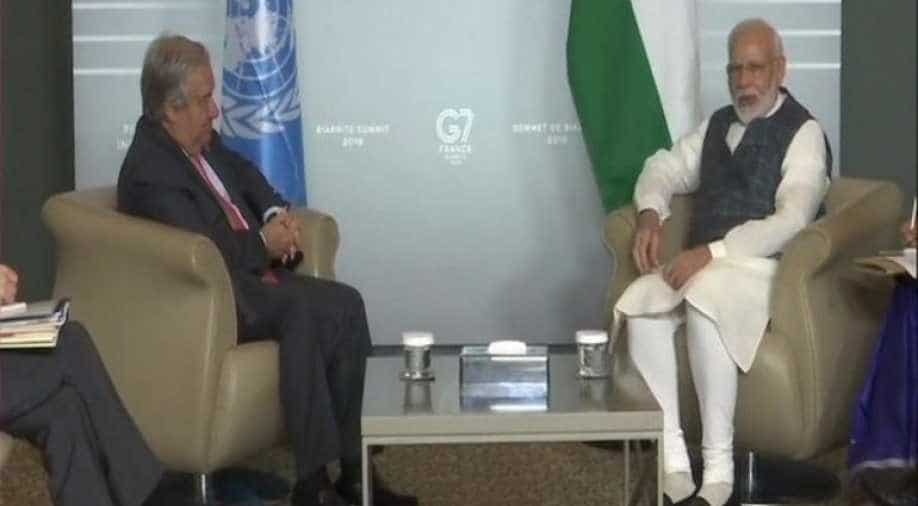 The PMO had said in a tweet after Modi's meeting with Guterres that the two leaders had "fruitful discussions on a wide range of subjects."

Prime Minister Narendra Modi told UN Secretary-General Antonio Guterres during their meeting on Sunday that repeal of Article 370 was India's internal matter and no step has been taken by New Delhi that in any manner threatens regional peace.

The Prime Minister also told Guterres during their meeting on the sidelines of the G-7 summit that terrorism was the primary threat and concern and in keeping with that certain restrictions will remain in place in Jammu and Kashmir to ensure law and order is maintained.

He said the restrictions will be progressively lifted.

Foreign Secretary Vijay K Gokhale, who briefed reporters here on Monday about Modi's three-nation visit and his participation in G-7 summit, said that UN Secretary General's primary aim of calling on the Prime Minister was climate change summit. Modi conveyed that India stood with him on this.

"The Prime Minister essentially laid out our basic position on the internal matter that Article 370 is under the Constitution, that on international front no step has been taken by India in any way or form to threaten regional peace and stability, that normalcy is returning to the state of Jammu and Kashmir, that in many areas restricts substantially eased or entirely removed and underlining that people and the state have faced terrorism for 30 or more years and that this is the primary threat, this is our concern and therefore, in keeping with that certain restrictions will remain in place to ensure law and order is maintained and will be progressively lifted," he said.

The PMO had said in a tweet after Modi's meeting with Guterres that the two leaders had "fruitful discussions on a wide range of subjects."

PM @narendramodi met @UN Secretary General Mr. @antonioguterres on the sidelines of the @G7 Summit. The two leaders had fruitful discussions on a wide range of subjects. pic.twitter.com/JuGsftQKRT

Answering a query about the discussion on Kashmir during the meeting between Modi and US President Donald Trump, Gokhale said: "You have heard publicly what Prime Minister and President Trump have said."

Asked about their conversation last night with Trump, he said Prime Minister Modi has made India's position clear and "there was no further discussion at this (Monday's) meeting."

Answering another query, he said there was also no discussion on Kashmir issue in Prime Minister's meetings with Trump and UK Prime Minister Borris Johnson.

During his three-nation visit, Modi also visited the UAE and Bahrain apart from France.